The Provincial Council of Gipuzkoa and Elhuyar today presented a collection of books in the foral palace to inspire young people in the professions related to science and technology. Imanol Lasa, MP of Economic Promotion, Tourism and Rural Environment, Jon Abril, CEO of Elhuyar, and Aitziber Lasa, head of Education Elhuyar STEAM and director of the project have been present. The collection, composed of three brochures, aims to promote science and technology among young people, the result of work among professionals of companies and institutions of different profiles of these areas of the Basque Country. 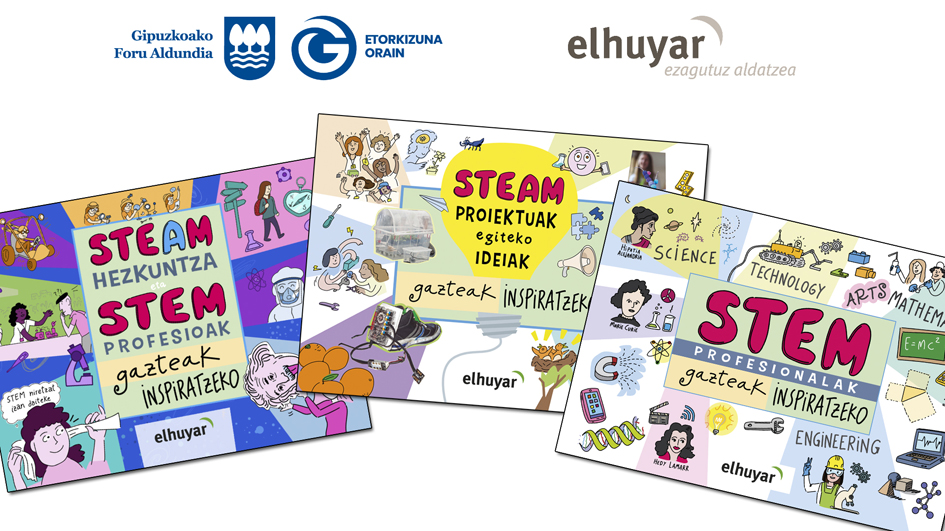 Project selected within the Council's call for grants to promote talent and learning, developed by Elhuyar. According to Eustat, in the Basque Country in four years there has been a decrease of 16.6% in the number of students enrolled in STEM. The 39% of students from the FP and the University were graduates in these areas. This reality is even more evident in the case of women: Students who choose STEM branches only account for 9% of the total number of newcomers in FP and 31% in college. This trend does not correspond to the demand of professionals, since in the last two years the business demand for STEM profiles from FP has grown by 56% and that of STEM university profiles by 25%.

Imanol Lasa has considered it essential to change this situation. It says that 80% of future jobs will require STEAM competencies. “We do not know what the world will be like in a few decades, but we know that the knowledge and capacities related to science and technology will be fundamental in all the economic sectors and to respond to the new challenges of society. Knowledge and qualification are the keys to future well-being and competitiveness.”

In the face of the pandemic crisis, he stressed the need to “strengthen the commitment to science and technology.” “If we don’t want to stay behind in the big transitions that are underway, such as digitization, we have to work on talent 4.0 from youth and tackle the gender gap we have in this field. In the field of STEM we need initiatives that break stereotypes and provide effective information, and this initiative developed by Elhuyar is based on. He fully shares the needs of Gipuzkoa and the priorities of the Council.”

Jon Abril, CEO of Elhuyar, highlighted the importance of experiences and community. “All research shows that experiences influence the aspirations of the future of young people, to know real examples, to know role models, to know in the most real way possible the activity related to STEM professions and to live as protagonists. For this, the participation and commitment of the entire scientific and technological fabric, as well as the development of methodologies and knowledge that allow them to work on these purposes, is essential.” In fact, he added that the leaflets presented today are the result of collaboration. “In the process started in February 2019 we met professionals from companies and organizations of different profiles: professors, researchers, members of development agencies, innovation agents, members of research centers, scientific informers, youth leisure agents…”

Around the collection of three leaflets with illustrations and explanatory texts by Pernan Goñi, Aitziber Lasa, head of education and guide to the Elhuyar STEAM project has given details. All three brochures will be available on zientzia.eus/steam to download for free:

1-STEAM and STEM to inspire young people: The brochure includes the keys to the change of the educational model that involves the definition of STEAM education: XXI. competencies for the 21st century; girls, women and STEAM; why STEAM; in schools, what is STEAM and beyond?

2- IDEAS for STEAM projects to inspire young people: this brochure contains tools, ideas, explanations and resources for young people to carry out science and technology projects.

Finally, Aitziber Lasa explained that they will launch the dissemination of STEAM education on their networks and websites. To do this, from this week will be published the comic strips illustrated by Pernan Goñi on the social networks of Elhuyar and in the educational section STEAM of zientzia.eus (zientzia.eus/steam).In addition, this website will include news, reports, interviews with experts or videos related to STEAM education.

‘Table of the Gluons’

The collection of leaflets is included in the project “Table of Gluons”. Through this project, Elhuyar is building a collaborative network among STEM professionals who want to inspire young people. The Network consists of the following agents: CRECM (Centre de Recerca per a l’Educació Científico i Matemática), Debegesa, Iraurgi Berritzen, Innobasque, DIPC (Donostia International Physics Center), CFM (Centro de Física de Materiales), CIC nanoGUNE, Department of Education of the Basque Government, and Danoabe.

The agents have been called “gluons” by Elhuyar, inspired by the similarity with the tail effect produced by gluons inside the atoms, and hence the name of the project. 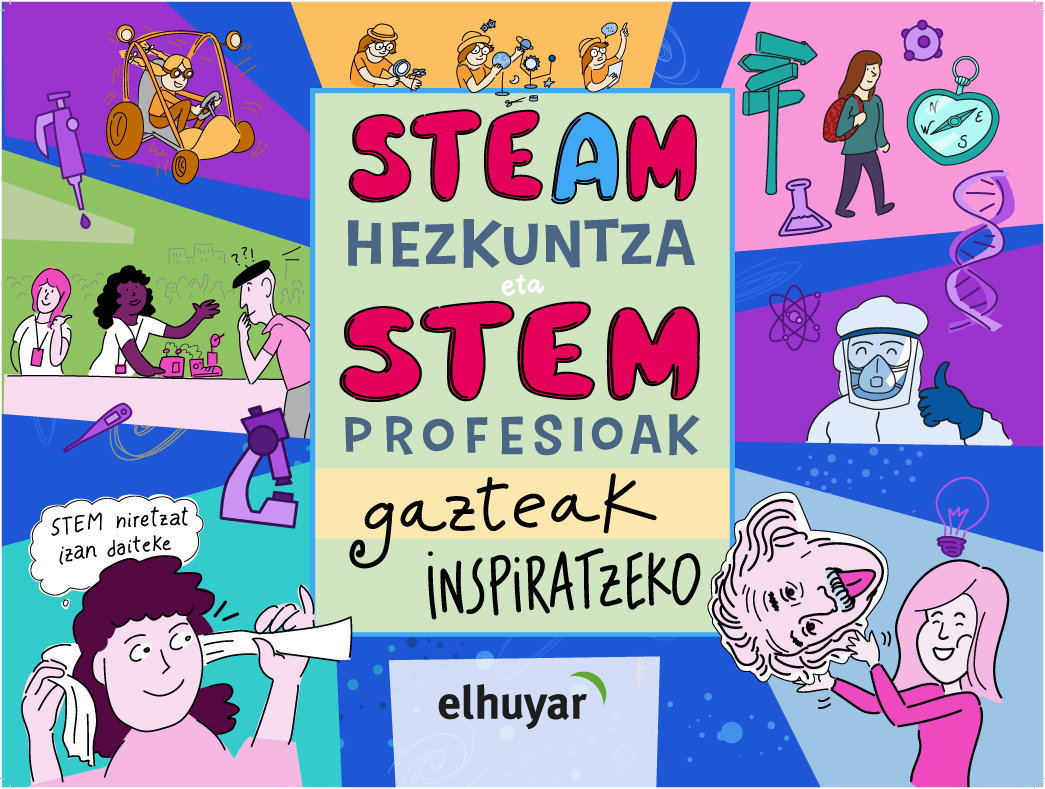 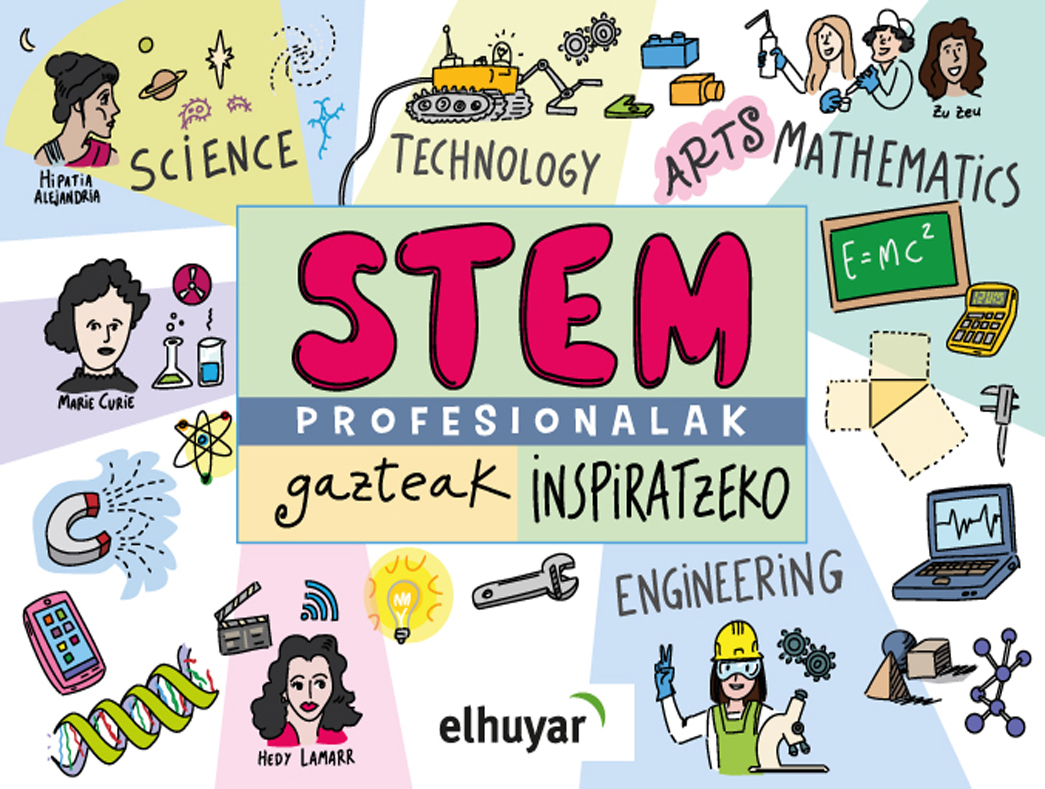 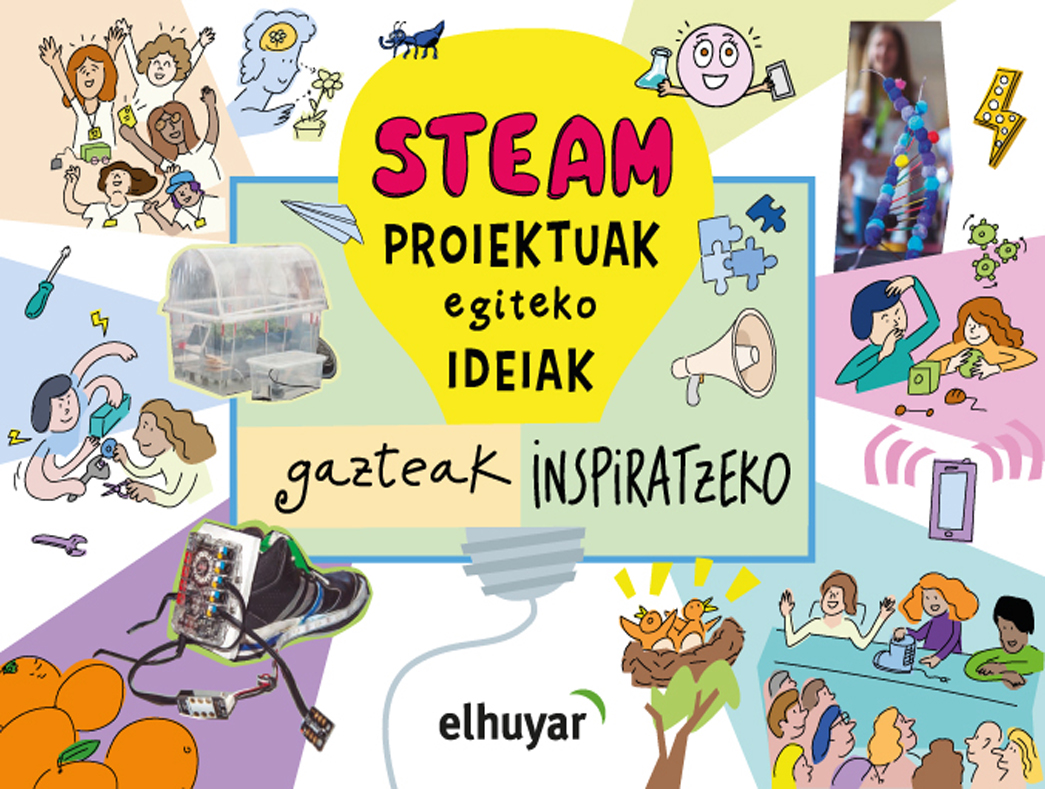