XXI. A big problem that society will have to face in the twentieth century will be energy management, both from the point of view of generation and storage. Developed energy storage systems. They have allowed one of the most important technological revolutions of the twentieth century: portable electronic devices. In the coming years they will also play an important role, since they can be the key to the evolution of a more sustainable and clean energy model, with the latest momentum and viability of renewable energies and the electric vehicle. With this objective, after tasting some beautiful olives, we have calcined their bones to develop next-generation hybrid storage systems with the coals obtained.

The current global energy model totally conditions the socio-economic nature and environmental areas of countries. Moreover, the Parisian climate summit showed that the model of energy production based on fossil fuels directly affects climate change as a result of greenhouse gas emissions, while the current energy model is unsustainable for the environment1. Those responsible for these greenhouse gas emissions are several types of stimulants that, in some way, we must influence them if we want to recover the health of our world. The researchers who devote ourselves to energy storage have identified two of these factors and we will try to put our grain of sand in this struggle. On the one hand, 25% of greenhouse gas emissions come from the electric sector and 14% from transport, in which half of the emissions come from vehicles2.

Therefore, on the one hand, it is necessary to develop an alternative energy model based on renewable energies once and for all, that allows a sustainable balance between the socioeconomic and the environment. However, for the development of a production model based on renewable energies there are limitations to overcome both from a technological and accessibility point of view. It is known that renewable energy sources are not continuous, so the generation of energy will depend on the availability of the sun, wind or water at any time. To overcome this limit it is necessary to have efficient energy storage systems that allow to store the excess energy and ensure the supply of energy when its generation is not possible. On the other hand, it is very important to give the electric vehicle the last impulse it lacks for its commercialization, in order to mitigate the emissions of greenhouse gases and recover the health and quality of life of the air of the towns and cities in which we live. For this reason, in recent years, a great interest has been generated in the development of energy storage systems. 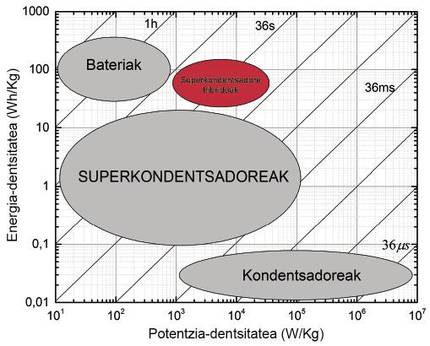 During the last two decades, the interest of the scientific community has focused on the development of different types of batteries or electrochemical capacitors, depending on the characteristics of some applications. The batteries are capable of storing energy densities higher than the capacitors, unfortunately the power they can offer is very small and the storage process is carried out by non-reversible chemical reactions, so the duration of these devices is not sustainable either.

On the other hand, in recent years the supercapacitors are gaining strength, becoming an alternative or complement of the batteries. The supercapacitors store the energy through physical processes, through the electrortion of the ions that takes place on the surface of the materials, allowing high powers and long durations, as well as the development of hybrid technologies more efficient for energy storage.

The characteristics of energy storage and power of batteries and capacitors are summarized in the graph called Ragone Plot, in which the energy density is represented with respect to the power density, showing the time of discharge of the devices in diagonal lines.

However, energy storage devices are not evaluated solely on the basis of their power and energy storage capacity. Other factors, such as loading and unloading times, the temperature of use, safety or the life cycle and cost, are decisive when selecting and marketing the use of these devices.

It should be noted that supercapacitors, unlike batteries, can be downloaded in seconds and loaded in seconds. This feature is very important in energy recovery systems, such as in vehicles or electric lifts that recover the braking energy. In addition, supercapacitors are able to supply large powers at low and high extreme temperatures. This factor makes them very attractive for applications with extreme conditions like the aerospace industry.

However, the supercapacitors also present operational weaknesses, with the work voltage being the most significant. In the batteries, the working voltage is close to 4 V, while in the supercapacitors it is limited to a maximum of 3 V, which limits the energy density.

The most attractive feature when trading is its long duration. Although in principle batteries accumulate energy through reversible chemical reactions, the materials of the electrodes undergo structural changes. These changes generate errors that force the system to deteriorate as the load/discharge advances. The supercapacitors, on the contrary, use totally reversible physical processes, thus avoiding such inflammation, guaranteeing mechanical stability and extending the duration of the device to millions of cycles. 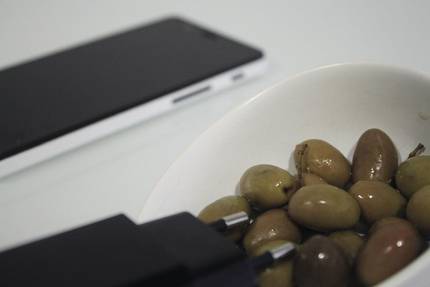 Figure . Idea to store energy in appliances from the olive bone.

As technology evolves, more and more devices are needed that need energy and great powers. Currently, the strategy to respond to these needs is to connect batteries and supercapacitors through an external circuit in series. In recent times, however, there is an innovative idea that has been presented as an alternative to this strategy: hybrid supercapacitors. Its foundation is to combine a supercapacitor type electrode with a battery-type electrode to unite the best features of both technologies into a single device. This combinatory idea was first published in 2001 as a concept, combining a high-density battery electrode (lto-lithium titanate) with a high-power supercapacitor (ac-activated carbon) electrode 4.

The olive bone is a lignocellulosic material formed by lignin, cellulose and hemicyelulose. These three components appear in the right proportion to obtain high-density carbons in the olive bone. The chestnut of the olive bones allows to obtain hard carbon (hard carbon, HC). By chemically activating this HC through KOH we will achieve AC. The HC has characteristics similar to those of graphite, but the layers of graphene are disordered opening the way to greater capacities in the material (in addition to intercaling the lithium between layers, it can be adsorbed in the pores). Furthermore, in addition to lithium, it allows the use of sodium (sodium cannot be used with graphite). The discussion on the exhaustion of lithium is on the table. There are great economic interests, and according to the observer (i.e., the interested) the answer will be affirmative or not. However, the factor that does not admit interpretation is the geographical location of lithium sources in the world. About 85% of the world's lithium reserves are found in the South American geographical region known as Lithium Triangle, specifically in the surroundings of Puna de Atakama, where are the saline of Uyuni (Bolivia), the saline of Man Died (Argentina) and the saline of Atapuma (Chile). Compared to lithium, we can find sodium everywhere and its extraction cost is much lower than lithium, so the substitution of graphite by HC is an interesting added value. 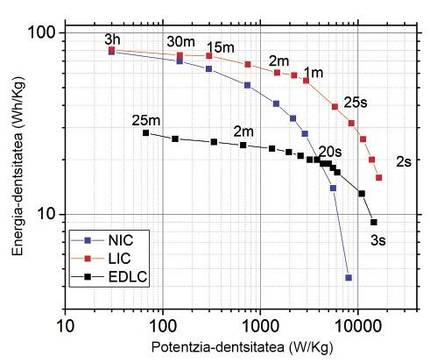 In this work we have synthesized the battery type electrode of HC by recycling the oil bone bio-residue and the electrode type ac-supercondenser. Combining these electrodes into a single device we have been able to manufacture long-lasting hybrid devices based on Li-ion or Na-ion technology at laboratory level with high power and power. These devices can condition the evolution of the two most important technologies that will configure our society in the future: on the one hand, lithium-ion based devices, with high energy densities and power and long duration, are very appropriate for their implementation in electric vehicles. On the other hand, devices based on sodium ion cannot compete with lithium in parameters of power and durability, but they could be cheaper (Na-ion technology is still to be commercialized) and, for example, they can be used as storage systems in the field of renewable energies, where a cycle of loading or two daily cycles can be sufficient and not as important as power, but a lower cost would allow to maintain the competitive price of renewable energies.

The characteristics of the devices LIC and NIC (in English sodium-ion capacitor, NIC), obtained by the combination of HC and AC obtained from the bone of the olive, are much better than those of a supercapacitor manufactured from the olive bone. The measurements have been made in a reduced voltage window (2,2-3,8 V) for long durations comparable to supercapacitors. As can be seen, the two new technologies greatly improve the energy density of the supercapacitor in low power densities, almost tripling the value of energy density. In large powers, LIC continues to improve the characteristics of the supercapacitor, not the NIC. Due to the greater size of the sodium ion, the diffusion resistance is greater within the material, so the loads and discharges are less fast and the power values are limited. On the other hand, both devices have a long duration (LICs > 50,000 and NICs > 5,000 loading/unloading cycles). However, sodium causes a much higher mechanical degradation than lithium due to its larger size in the HC, so it increases the inflammation of the material and therefore reduces the duration of the device.

http://www.cop21.gouv.fr/en/
2 https://www3.epa.gov/climatechange/ghgemissions/global.html
3. http://www.maxwell.com/
4th Amatucci; Badway, F.; Du Pasquier, A.; Zheng. T.: J. Electrochem. Soc., 148, 8 (2001), 930-939.
5. Aida, T.; Yamada, K.; Morita, M.: Electrochem. Solid-State Lett. 9(12) (2006), 534-536.
6. http://www.jmenergy.co.jp/en/
III Science and Material Technology. congress congress congress congress congress
Last July, the third edition of the Congress of Materials Science and Technology was held in Markina-Xemein, organized by the Leartiker technology centre. Almost 100 professionals from the world of materials participated in this congress, which is held entirely in Basque, and the scientific committee of the congress indicated that the papers presented had a higher level than ever. 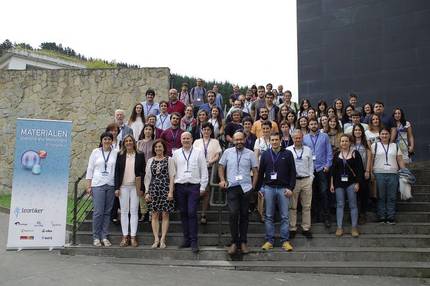 For two days a lot of material related topics were discussed in Markina-Xemein: energy storage materials, technologies for the development of future nanochips, nanoparticles for the treatment of cancer, gene therapies, polymeric, metallic, ceramic materials, their advanced processing, etc.
With thirty oral presentations and forty posters, Jon Ajuria, a member of CIC Energigune, awarded the prize for best oral presentation, has written this article for the magazine Elhuyar, together with his colleagues, on the work presented at the congress. 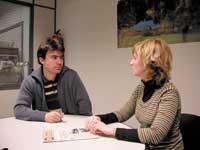