In the field of alternative energies, wind energy is the most developed path in recent years, both in our environment and in the world. You hear the "wind farm" and remember the saw or meadow planted with wind turbines. But the latest trend or bet on wind energy is, at least in Europe, the implementation of wind farms at sea.

Elhuyar magazine has dealt with the issue of wind energy several times. For example, a dossier on wind energy was published at number 133-134 last year. It is a fashion theme, no doubt. But the impact generated by the location of wind farms built and under construction in our environment has also been a subject of debate. In fact, environmentalists, naturalists and mountaineers have denounced the physical transformation, the visual impact, of the environment of the mountainous areas that will be affected by wind farms. On the other hand, the benefits of wind energy are not questioned.

The trend that is being consolidated in recent years in leading European countries in wind energy is favorable to the location of wind farms at sea. Studies and applied research began in the 1980s in Europe, Denmark and the Netherlands, mainly due to the good wind in the seas of both countries, both due to the reduced extent of the land, the high population density and the lack of adequate spaces for the installation of wind farms on land.

Characteristics of the sea wind

The surface of the seas and lakes is very flat (at least when the wind speed is constant) and, of course, in it the wind has few obstacles. Therefore, the wind speed will hardly vary depending on the height. On land, however, the wind speed is lower by the ground than above, since the orography and the variations of the soil hinder the wind. Therefore, the axis of wind turbines can be located lower in the sea than on land, so the towers will be cheaper (on land the height of the towers of wind turbines is slightly greater or equal to the diameter of the rotor, while in the sea it is considered sufficient that the height of the tower is three quarters of the diameter of the rotor).

In the sea the wind is less turbulent than on land. Why? Because in the atmosphere above the sea the temperature variation depending on the height is less than on land. Sunlight penetrates several meters into the sea, while on land solar radiation only warms the top layer of the soil, which is very hot. This makes the temperature difference between the surface and the air less above the sea than above the ground, so in the sea the wind has less turbulence. Therefore, the wind turbine installed in the sea will have a longer life, since the mechanical parts must withstand minor efforts.

Not all are advantages, of course. Construction costs are much higher at sea than on land and more advanced designs and technologies are needed to protect against corrosion caused by marine visuals, as well as better control equipment to reduce maintenance tasks. High voltage cables must be transported to the ground, which also makes installation more expensive. However, current trends indicate that large turbines, called multimegawatti turbines, of 2 MW of power or even greater (turbines that are being installed on land are 500-600 kW, towers 30-50 m and the length of the wings are usually around 12 and 25 m. In the towers of 60 m in length it is intended to install turbines of 2.000 kW with fins of 35 m in length in the sea). The main reason for the use of large turbines is the reduction of foundation and installation costs, since the use of multimegawatt turbines will reduce the number of turbines needed for the desired potential.

In addition, costs will be reduced rapidly with increased facilities and improved technology. This is what is happening in the land parks. For example, in Denmark, the cost of electric power in large wind farms was 14.8 pesetas per kWh (0.6 pounds) in 1994 and has been reduced to 8.9 pesetas (0.36 pounds) in 1997. Therefore, within 3 years the cost has been reduced by 40% and has already been assimilated to the cost of electricity by fossil fuels.

World leader in wind research. He has built the first two marine parks in the world. - The first, Vindeby, was built in 1991: It consists of 11 turbines of 450 kW and is located between 1.5 and 3 km from the coast of the island of Lolland, in waters of 2-5 m of depth. 12,000 MWh of electricity per year.

- The Tuno Knov maritime park was built in 1995: It consists of 10 turbines of 500 kW and is located in the sea of Kattegat, 6 km from the coast, in waters of 3-5 m of depth. Danish power companies want to install 4,000 MW of power in marine wind farms in the coming years, with which they believe they will produce 13.5 TWh per year of electricity, 40% of Danish electricity consumption. The ultimate goal of the Danish government, thanks to wind energy and other measures, is to halve CO2 emissions by 2030.

The Government's objective is to encourage the use of renewable energies, which means a reduction in fossil fuel consumption by 10% by 2020. This requires an installed power of 3,000 MW in wind farms by 2020. Due to the lack of space for the implementation of land wind farms in the Netherlands, the solution is being sought in offshore wind farms. In fact, the Government expects that in 2020 the marine wind farms will have installed a power of 1,500 MW. The Netherlands currently has two wind farms in the Ijsselmeer inland sea, one in Dronten of 11.4 MW (consisting of 19 turbines of 600 kW) and one in Lely of 2 MW (composed of 4 turbines of 500 kW). In addition, two 100 MW farms are projected on the North Sea coast.

In the 1970s Sweden began to study the wind power potential of its long coastline and identified 17 maritime zones for the construction of wind farms. It was concluded that an electric power of 22.5 TWh/year could be produced. Sweden plans to replace nuclear energy with long-term renewable energy. It currently has a wind park in the sea, built in 1997 in Nasudden, next to Gotland, 4 km from the coast. It has a power of 2.5 MW (5 turbines of 500 kW).

In 1992 the UK built a 2.7 MW semimarine wind farm on a breakwater at Blyth Harbour. And in the same place, Blyth, this year is finalizing a 1.5 MW park. On this occasion the park is located totally in the sea and the turbines (two turbines of 750 kW) are in water of 8 m of depth. In addition, two new parks are proposed, one at Scroby Sands and one at Gunfleet Bank. Between the two would have a power of 65 MW.

About fish, molluscs and crustaceans that inhabit the water, or on rodetes and fish farms, how do they affect this type of structures? Research at the Danish Vindeby Park has shown that seabed structures have acted as artificial reefs and have been new spaces for biological colonization. Consequently, native flora and fauna, fish, mussels, etc. have increased.

The impact on bird populations has much to do with the site of the park. Obviously the migratory routes of birds must be avoided. The height of bird flights also has a lot to see: some species run near the sea surface, while other species exceed 300 m. Research has shown that the greatest impact on birds occurs in adverse and poorly visible weather conditions, but that this impact can be significantly reduced considering flight routes and heights and identifying sensitive species. Research in the Danish maritime park of Tuno Knobs has shown that the park does not affect local bird populations.

Wind farms also generate noise. But the sea parks are located a few kilometers from the coast and at that distance the noise is not heard. On the other hand, a park in Denmark has studied the transmission of vibrations from the foundations of wind turbines in the water to know if it influenced the behavior of marine mammals in the area, but no effect has been found.

Another point to consider is visual impact. The visual impact is due to factors such as distance to the coast, number of turbines, coastal landscape characteristics and landscape use. Studies have been conducted in Denmark and the Netherlands. It is necessary to analyze very well the location and ask the opinion of the population of the area before deciding anything. It is also necessary to analyze its possible influence on fishing. The impact will be measured taking into account local fish species, fish densities and local fishing techniques. Studies conducted in a Danish marine park show that there is an impact, but that it is small. 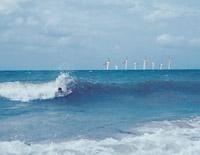