For a few years the prefix eco has become fashionable and seems to be still a good claim for the consumer. In the tourist field, for example, the TIES, the International Ecotourism Association, celebrates this year its 20 years of existence, and according to its data, every year more tourists choose this type of trip.

In fact, the TIES association clearly defines ecotourism as the responsible journey to natural environments, respectful with the environment and contributing to the well-being of its people. To achieve this, TIES takes into account many aspects and requires the tourist to monitor the details. Thus, it has a list of recommendations to explain to the traveler how it should act. 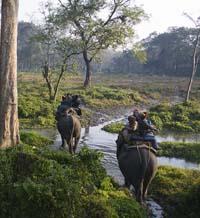 Tourists on elephants, Jaldapara in the sanctuary of wild animals, in India. (Photo: Debnath)

Among them, the TIES recommends the learning of some words of the local language, the purchase of gifts, vespers and/or memories to its people, the use of its means of transport, the food in its restaurants and the lodging in its hotels, the care of the apparel, the recruitment of local guides, the payment of the entrance to the protected areas...

If tourism companies act in parallel to these reasonable recommendations, ecotourism can benefit people from the place. At least that is the conclusion reached by a group of American researchers who have analyzed the subject. The group has biologists and economists who have presented their results in the prestigious scientific journal PNAS, according to which "the data are decisive". In particular, there has been a follow-up of the villages close to some reserves of Thailand and Costa Rica, where poverty has been found to be lower than in localities far from reserves â• 30% less in Thailand and 10% in Costa Rican•).

In this sense, a study conducted in Africa has revealed the key to considering the inhabitants of reserves to achieve the goal of protecting nature. One of the places studied is the reserve of Dzanga-Sangha (Central African Republic). The reserve was established in 1991, with spaces for ethaturism, local hunting, safaris and research.

The researchers have analyzed the management carried out since the creation of the Reserve and have found that the disregard of the population has harmful consequences for wild species, especially in gorillas and elephants. For example, when the meadows have not been left when making tourist accommodation, the antelope population has decreased. And that is precisely the main hunting of its inhabitants. Therefore, in these cases they have begun to hunt gorillas. However, in those who have taken into account the premises before doing anything, the consequences have been positive. The results have been published in the specialized journal Conservation Biology.

However, sometimes ecotourism also causes unexpected damage. For example, the problem that diseases coming from abroad generate in our health system is frequently mentioned. Rarely is the opposite heard, that is, the damage caused by the diseases that travelers carry abroad.

In Côte d'Ivoire, between 1999 and 2006, five pests of respiratory diseases occurred among chimpanzees. German researchers analyze the dead chimpanzees and show that all were killed by two viruses. Both are human and produce common waterfalls in healthy adults â€“ tourists and researchers, for example. However, they can cause pneumonia in vulnerable people, being one of the main causes of death for children in non-industrialized countries.

Therefore, studies show the difficulty of combining the prefix "eco" with tourism. The TIES association will celebrate the 20th anniversary congress in September, and it is possible that these issues will be addressed. They draw useful conclusions.