When the common Antzandobi practices hunting, he always sits in the corridors (tall and clean) waiting for his victims. When he sees their prey, he falls on them through a wavy flight. Before eating the animals you catch, stick them on the thorns or on a sharp tip. Therefore, when he is hungry he has no problems, since he has a natural pantry.

The peak of the Antzandobia is robust.

The size of the common Antzandobi (Lanius collurio) is 17-18 cm, being a large and robust bird. It is the only one that explains the sexual dimorphism between our plays, since the male and the female are totally different. The first is very simple: the piling and the bluish bishopric, a black strip as a costume along the eyes, a reddish throat in the neck, a red chestnut color in the bottom, a reddish white feather and a black-white tail. The female, on the contrary, is more difficult to distinguish. On it appears a red pen highlighted and low ochre color, without black bands of eye.

It is summer. In April it is heading towards our territory and will be between us until August. The first days of June, in the only nest he makes, lays between 5 and 6 eggs. The eggs have a variety of colors, usually bright. Usually it nidifies in thorns or inside of pointed bushes and less than three meters high, of moss and grass. 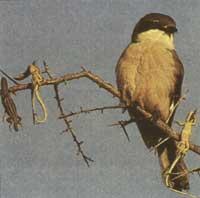 The Antzandobia usually hangs the dams on the thorns.

The chiton (while the female heats the male gives him food) extends between 14 and 16 days. Two or three weeks later, the offspring know how to fly and will be able to feed themselves, obtaining independence. Sometimes, before they know how to fly, they will leave the nest, remaining in the adjacent branches.

It usually lives in extensive territories, that is, in cultivated lands, grasslands or scrublands. Many times it can also be found in the amecias.

The common Antzandobi is posed and placed above all in shrubs, posts, fences, wires, etc., to look to the ground with attention. At the same time, the tail moves slowly upwards or sideways, while spy. When he sees a prey on the ground, he heads sideways toward it. In addition, the insect that passes around it is easily trapped. However, it often fails on the ground.

Its main characteristic is the construction of a wisdom with its prey: they clavan in spine thorns or in a sharp spine. We can analyze this practice from two points of view. On the one hand, it is about breaking the prey because the food is too big, since it can not crush it with the claw, since it has the head or the big and strong beak and the claws are weak. On the other hand, as I mentioned above, these provisions can be used according to the time of year. In spring and summer they feed on cold blood animals (insects, amphibians and reptiles). 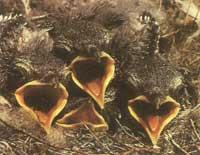 The common Antzandobi lives in almost all of Europe. It can be observed from the north of the Iberian Peninsula to the south of England and Scandinavia in breeding time. We can find it in all Euskal Herria, except in Rioja Alavesa.

As a migratory bird, between August and September it heads towards tropical Africa to spend the winter. However, unlike other winter migratory species in Africa, they travel along the shores of the Mediterranean (France, Italy, Greece and Turkey) without crossing the Iberian Peninsula.