We inherited the dreams of the 36: researching in Basque in cystic fibrosis 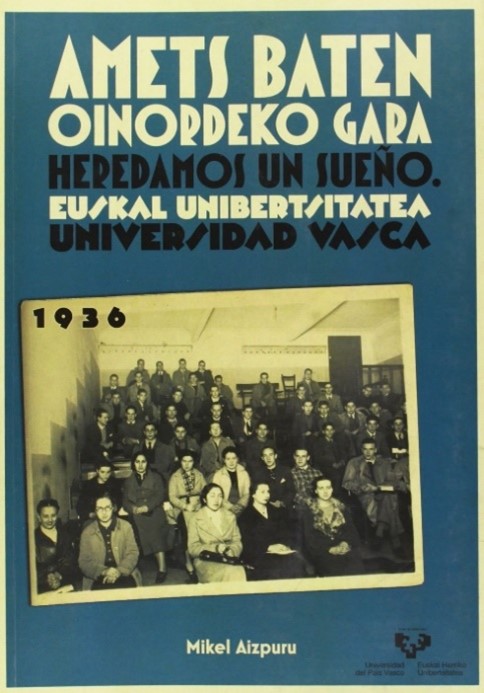 “Today is the first of December, two thousand eight, the teacher has departed from the realm of small things.” This is how the song of Ruper Ordorika begins in tribute to Mikel Laboa. Precisely the teacher who left us on the same day of December, thirteen years ago, I decided to write this article. I remember how yesterday the day was the great reference to the dream come true.

We could continue to dream because they dreamed and dreamed because we will continue to dream. But we dream that dreams will come true someday, and that's what our predecessors managed to do: to lay the groundwork for us to be Basque in university studies, doctoral theses and advanced research.

In the words of Professor Mikel Aizpuru’s book, we are heirs to a dream (Figure 1). In the autumn of 1936 the Basque Government created the Euzkadi Higher School of Music. A public university rooted in the Basque Country that dreamed of internationalization, and although initially the path of war made sleep impossible, now, 85 years later, thanks to that dream, we could investigate in the Basque language. This dream shows us that believing in a collective rooted in the Basque country and relying on teamwork, dreams can come true. Because they had that dream, I can explain to them in Basque the way we are going in the research of cystic fibrosis in search of new dreams. A path with an inclusive international view, which integrates foreign researchers but, above all, with the Basque as the central axis.

Cystic fibrosis is a monogenic, hereditary, chronic and degenerative disease. The origin of the disease is found in the CFTR gene mutation. This gene is located at the 7q31.2 locus of the seventh chromosome and codes the transport protein of the membrane cell chloride ion. The mutation causes a buildup of thick, viscous fluid in the lungs, pancreas, and intestines that resembles mucus. This fluid can also accumulate in the sweat glands and in the male reproductive system. Patients with cystic fibrosis may have symptoms or signs of asphyxia, fatigue, continuous cough, stomach pain, loss of constipation, intestinal obstruction, and male sterility. When the situation worsens, they suffer severe infections and can be diabetic, it is a disease of high mortality. In poor countries it is rare for these patients to continue to dream from the age of 20, while in rich countries with early diagnosis and more appropriate treatments they live around 45 years. Currently there is no treatment 2 (Figure 2).

Once the newborn's heel prick test has been done, health professionals at the birth unit of Cruces Hospital have to report bad news to one in five thousand parents with a child with cystic fibrosis. However, it is much worse, as in other places, that it cannot be diagnosed in newborns, as it is very important to start treatment sequentially. Although after the bad news comes denial, moving as soon as possible to acceptance and starting to dream is essential to progress, as in 1936. Patients with cystic fibrosis and their families are dreaming collectively. The Association of Cystic Fibrosis of the Basque Country serves as a speaker of all these dreams, and on September 8, each year, coinciding with Diaspora Day, the International Day of Cystic Fibrosis is held in order to sensitize society. Like cystic fibrosis, the Basque Country also has its international day (3 December), but we have not yet found a cure for both. UNESCO has recently declared XXII. the disappearance of seven thousand languages by the twentieth century, 903% of the world's languages, including the Basque language. We Basque speakers need excuses for dreaming like cystic fibrosis. Therefore, in order to avoid the disappearance of the Basque language and at the same time to advance in the investigation of cystic fibrosis, we published our findings in Basque scientific journals such as Ekaia and Osagaiz (Figure 3).

Interestingly, although some find it too metaphorical, I notice some similarities with cystic fibrosis and Euskera transmission. The most frequent mutation of the CFTR gene is the elimination of phenylalanine, called F508del, at position 508 of the seventh chromosome. Since cystic fibrosis is an autosomal recessive disease, the child should receive the defective gene from his mother and father, i.e. both should transmit the affected CFTR gene to the child for development. Something similar occurs with the transmission of the Basque language. According to sociolinguistic studies, the fact that both spouses are bilingual is almost essential for their children to receive the Basque language as the first language. Thus, because the duration of the disease depends on the number of parents capable of transmitting the mutation, the length of life in the Basque language is also conditioned by the number of speakers.

I head every morning to the research laboratory we have on the Álava Campus of the UPV/EHU with the same illusion as the previous day. Galen attached great importance to drug preparation methods. We could say that Galen foresaw hundreds of years before the art of the mastery formulation that was later established in the Renaissance. Almost 2,000 years after Galen's birth, the technological revolution in the field of nanotechnology and genetics opens new doors for the development of advanced therapy drugs. In this long journey we will have to cross these new doors and learn to combine biopharmaceutical nanoparticle technologies, microfluidic, bio-impression 3D and gene technique such as the CRISPR technique (Figure 4).

In addition to dreams, the life expectancy of patients with cystic fibrosis depends largely on all these technologies. Similarly, we could say that with the life expectancy of the Basque country. In other words, if a series of strategies and methods developed by sociolinguistics experts are correctly applied, the Basque language can remain. I refer to the CRISPR technique and the Eusle 5 methodology. Both are similar, although they come from very different areas. Currently, CRISPR allows us to cut and paste fragments of gene material into any cell. The possibilities of these molecular scissors are enormous. Therefore, it was the biggest scientific breakthrough in 2015, although very little is known about its impact. As already mentioned, the CRISPR technique presents similarities with the Eusle methodology designed by the Cluster of Sociolinguistics for the change of linguistic habits. Eusl can modify the habit of speaking in Spanish and resolve the CFTR gene mutation damaged by CRISPR, cutting the incorrect genetic sequence and pasting the new one. In addition, the CRISPR technique can help patients with cystic fibrosis to maintain their hope and, at the same time, the Eusle methodology continues to live in the Basque country. Therefore, it can be said that the members of our research team are carriers of the use of the scientific Basque. Although English is the main language in research, we always try to accommodate the Basque language, even in communications at international conferences. And, of course, every two years we never miss the Ikergazte Congress of the EU, the only international and Basque world congress (Figure 5).

We have to take the poster to present it at the Ikergaztea Congress in its pool so that it arrives without damaging the event. In addition, the transport of nuclear acid designed to repair the gene mutation to the cell nucleus requires the development of complex nanosystems. In our lab, we produce nanoparticles made of lipids and polymers, also called non-viral vectors. In the case of cystic fibrosis, these nanoparticles help us to protect the nucleic acid designed with the CRISPR technique and guide it to the cell with F508del mutation. Like the poster to the congress, the path from nucleic acid to the cell is winding, especially if you want to do it in Basque. The future of Basque research depends on those who research it in Basque. If the Basque is not functional and does not serve to investigate, the Basque research will disappear. If Basque scientists do not speak Basque, we are clear about that. Several researchers around the world provide scientific information on cystic fibrosis in Spanish. But we are not so many to inform in Basque in the EITB news or in the web portal of the Zientzia Kjai of the Chair of Scientific Culture of the UPV/EHU, but we are more and more making the dream come true.

No doubt, like those of 36, we have chosen a path full of ignorance and we have a tough challenge. But nobody and nothing took away the desire to keep making sleep a reality. We are born because the others are born from the same trunk!

5.- Jauregi P, Suberbiola P. “The Eusle methodology: from linguistic habits fixed in Spanish to those of Basque in the working world”. Sociolinguistic Magazine BAT 2018; 107(2): 97-131.