News about nuclear waste is periodically published in the media. Recently, the Akatsu Maru loader, which transported the plutonium from France to Japan, caused a great stir, especially in France, due to the actions of the environmentalists against him. But despite not appearing in the media, the problem remains the first: in the nuclear power plants of the world hundreds of tons of radioactive waste are generated every year that nobody knows what to do. Also, many of the nuclear weapons in the hands of the military have already become garbage.

Today, more than 500 nuclear divers roam the oceans and nearly 100 nuclear ships. In addition, almost all are equipped with nuclear weapons. Have they never had an accident?

The International Atomic Energy Agency (IAEA) has conducted a study on accidents, since the military never want to clearly recognize such accidents. In the last 42 years there have been at least 31 accidents in military vehicles carrying radioactive material: aircraft, satellites, submarines, warships, etc. The exact number of nuclear weapons sunk in these accidents is not possible because the military does not want to know. Once the accident occurs, the vehicles remain in the sunken place, as it is almost impossible to leave the subsoil.

Therefore, millions of becquerel (radioactivity unit) are scattered across the seas, well above the dose of radioactivity emitted into the atmosphere by the Chernobyl accident. To this radioactive material from the accidental sea we must add the radioactive waste that several States have launched from 1946 to 1982.

Akatsu Maru, a
Japanese cargo ship of 4,800 tons with double hull. It has two autonomous diesel engines that allow circulating between 13 and 15 knots per hour. An anti-collision radar system has been installed that will navigate the tides of low maritime traffic. Even with the best equipment and navigation aids, the risk of accident does not disappear completely. One fact is that every year between 700-800 large cargo ships sink.
Akatsu Maru has taken about two months to tour Japan from France. On the way it crosses the typhoon zone between the Pacific tropics. The tour has remained hidden and four US satellites have constantly monitored throughout the trip. If it has not passed through Cape Horn, it would surround Cape Good Hope. The map below shows the two alternative routes, as well as the most dangerous areas.

These nuclear waste is low or medium. High, if that is true it is not so clear. Finally, in 1982 the mouth of this type of waste was banned. Meanwhile tens of thousands of barrels have been submerged. These tanks are surrounded by asphalt or cement, but seawater dissolves these coatings in 10-15 years. The United Kingdom, Switzerland, the United States, Belgium, France, the Netherlands, Korea, Japan, Sweden, New Zealand, Germany and Italy have launched over 36 years 100,000 tons of radioactive waste. Among them, the United Kingdom (76.5% of total waste), Switzerland (9.6%), the United States (7.7%) and Belgium (4.6%) have been the main causes of marine pollution.

The main landfill is the North Atlantic. The map shows that some of the radioactive cemeteries are not far from the Basque coast. Large amounts of assignments and plutoniums have been measured around it. Therefore, nuclear waste was prohibited. However, the damage is already done. In the Channel of La Mancha, on the coast of Normandy, crustaceans have a very high radioactivity rate. At 30 km, between 65 and 160 m deep, the British and Belgians launched their nuclear garbage.

On the other hand, the Norwegian government has banned fishing in an area of the North Sea near the Norwegian coast, where the radioactivity rate is dangerous. There, on April 7, 1989, a Soviet diving with missiles sank. The following explorations have shown that the nuclear diving reactor is releasing radioactivity and has reached the nuclear heads of the missiles sooner than expected by corrosion. These are examples we know. And what we do not know?

Nuclear waste through the sea

It has been said that the immersion of radioactive waste in the sea was prohibited in 1982. But the problem did not end. As we have seen, in the air, under water, in the stratosphere or above the sea, a lot of vehicles powered by nuclear energy circulates and accidents can occur anytime and anywhere. And they have happened, as has been shown in previous lines. In addition, there is a problem of vehicles that do not use nuclear energy but transport radioactive waste. In fact, today many nuclear power plants in the world produce plutonium as waste. This plutonium is recycled in places like the French plant of The Hague. But to do this, the plutonium must be carried from the nuclear power plants to the plant and accidents can occur in this way.

The concept of plutonic traffic is therefore legitimate, especially in Europe. Germany, the Netherlands, Switzerland and Belgium recycle their radioactive waste in France. Weekly, a truck loaded with plutonium oxide (IV) leaves the Hague plant in different parts of Europe. And now that the Japanese have also started recycling their waste in France, plutonium has to go through the world side by side. 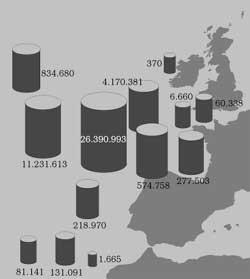 Radioactive submarine cemeteries in Europe have
sunk for 36 years tanks containing radioactive waste on the Map. The radioactivity accumulated next to each cemetery is represented in gigabecquerelas.

Initially, plutonium to Japan was to be transported by plane through North America, but Alaska and Canada imposed a circular ban on the project. No one wants plutonium to pass over itself. Then another route was sought: The North Pole road, along the Bering Strait and the Norwegian Sea, would be transported on a Boeing 747 cargo plane, like the one that recently exploded against a home in Amsterdam. But it was impossible to meet the minimum safety requirements of the container that should be installed in the cargo room of the aircraft. At the moment containers of this type cannot be built.

Therefore, regardless of the intention of air transport, the maritime route was chosen. Is that road safe? The truth is that it is not easy to predict the risk of accident and its consequences. However, nuclear causes more terror than fear and some states have banned the transport of radioactive waste on the coasts of their territory. As a result, to travel from France to Japan, the Akatsu Maru loader has had to make one of the longest routes.

To comply with the agreement reached, this or other vessels must travel at least 3 times a year and 10 years. And this is only what corresponds to plutonium. What recycling means is well understood: waste from nuclear reactors must first be transferred to the recycling plant. Secondly, all products and waste generated by recycling itself must return to its place of origin.

While this rapid transit of radioactive waste occurs, the debate between environmentalists and nucleocrats is more than ever. But, over the years, it is increasingly leaning towards ecological balances. At present, the recycling of plutonium has no economic justification. The US, the nuclear giant, the supergenerator and the recycling program abandoned a few years ago, under Carter's presidency. France has remained practically alone on this road and has paralyzed the program of supergenerators.

Japan is building its supergenerator, but it will be very small. With the path of supergenerators almost in suspense, recycling has been orphaned (since the objective and raison d'être of the recycling plants is precisely that: taking plutonium from the waste generated in conventional nuclear power plants and using this plutonium as fuel in supergenerators). On the other hand, the cost of recycling is increasing, as increasingly demanding safety conditions must be met throughout the process.

"Still life with the Sea"

The International Agency for Atomic Energy estimates that the list of accidents of the different vehicles carrying radioactive material has been the following (have all been existing but are there all those that occurred?) 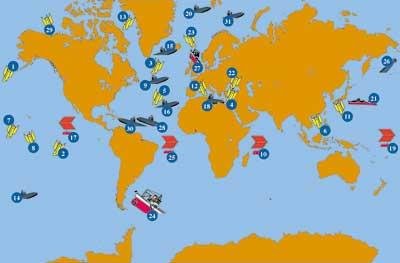