Venice, a hundred years under water

Will Venice disappear within 100 years? If nothing is done, yes. To this conclusion have reached experts from all over the world who have met at the University of Cambridge. At the beginning of the century the square of San Marcos, center of the city, was flooded on average 10 times, currently about 100. And it is that, on the one hand, the city is sinking and, on the other, the level of the sea rises ever higher. The instability of the Venetian land is the cause of sinking, while that of sea level is the cause of global climate change. Since 1969, when a large flood occurred in the city, experts did not meet. 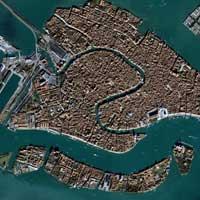 The Venetians look sad to the future, it does not seem that Venice is the Venice of always. The city is submerged and if no measures are taken it will disappear. Although something is done, the appearance and essence that has given it fame throughout the centuries can change. The proposed closure of the city's flood protection pond has generated construction-based solutions, such as the Mose project based on giant dams.

From the point of view of the protection of nature, this type of solutions can generate many problems. The loss of the natural sediment and the wetland, the degradation of the soil, the accumulation of industrial pollutants in the bay and, in general, the loss of water quality are the main concerns of the ecologists regarding the construction projects. Its inhabitants do not lack reason of fear, but if we observe the history of Venice the flood has not been lacking.

When we talk about Venice, people represent the city of canals, but Venice, if anything is, is a pond. Lacuna means in Latin lack, lack or scarcity; that is, not land or water, something to be passed. The lagoon of Venice was completed with the sediment accumulated for thousands of years by the rivers that go from the plain to the Adriatic. The lagoon is not sea, until it there are 50 kilometers of land and sand. The sea has only three accesses: Lido, Malamocco and Chioggia. For these three zones the salt water enters and from there the salt water leaves. Every six hours the tide enters and leaves for the lagoon to breathe. The islets not covered by the tide, the sand banks, fangos and algae that emerge and form in the intertidal space, are also important characteristics of the pond. Temporality has strength in the pond.

Taking into account these characteristics, being one of those desires of nature, it is clear that the lagoon of Venice was ever born to disappear. But one day a group of human beings, fleeing from the barbarians, decided to face the temporality and sit there, being a good place to live. V. V. It was a century. They began to dry up the lands, began to create channels, covered lagoons, diverted rivers… until building the city from generation to generation.

Therefore, Venice since its foundation has been against nature. Of course, in this centuries-old struggle, some moments have had more importance than others. For example, the year 1501 is representative, since the rivers Sile, Piere and Brenta decided to deviate. These three rivers were the main rivers that reached the pond. It took two centuries to carry out the work. The time of the Republic of Venice was also fruitful in this type of projects, since the excellent situation of the Republic was translated into works that allowed to catch larger ships. These works allowed the boats to access the raft and reach the port. Despite the blow, the raft was able to maintain the balance. 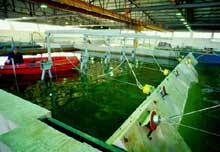 After being under the orders of France and Austria, Venice became part of Italy in the XIX. In the twentieth century. Then there were also numerous works, but the pond was maintained. Real coup XX. He arrived in the 1950s. To get the oil tankers to the industrial port of Marghera, the oil channel, a direct channel of 15 meters deep, was built. The entire environment was filled with chemical and petrochemical industries. The factories were getting more and more water from the pond, using it, dirty it and pour it again. The balance was broken. The pond, an ecosystem of fresh, salty and brackish water, has become a swamp on the shores and in the centre of the sea. Oil tankers, merchant ships and large boats for tourists produce big waves.

As a result, sand banks, silts and algae that were generated with the passage of the tides, increasing erosion have been destroyed. Erosion eats next to the pond and the foundation of buildings. The conclusion is clear: In 1990, Venice was 23 centimeters below the beginning of the century.

However, the red alarm was first fired in 1966. Then, an atypical tide flooded for a day the city and the islands of the pond. Numerous national and international committees were launched, damaged works of art were recovered, numerous investigations and seminars were carried out and various projects were presented. Consensus was also reached in the theoretical solution: "recover the hydrogeological balance of the pond, stop the process of degradation and eliminate the causes that have caused it". How? In that is the debate. 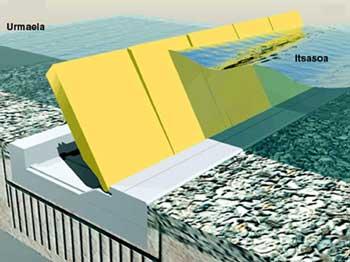 Before the summer, the government of Silvio Berlusconi approved a special project for Venice: Project Mose. According to this, to avoid the influence of the tides, three giant dikes will be made in the three entrances of the Adriatic to Venice. 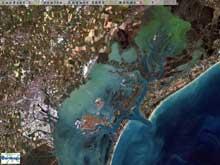 The idea of the Mose project is ancient, presented for the first time in 1980. From the beginning it provoked a debate, so far it has not been approved. The debate is also due to approval, but arguing that the current situation in Venice is worse than 20 years ago, both the Italian government and the Venetian authorities have launched the project.

The dams will be built at the entrances of Malamocco, Chioggia and Lido. They will be mobile and articulated and will be launched when the normal water level rises one meter and ten centimeters. Therefore, they will normally be submerged at the confluence of the waters of the pond with those of the sea and will only rise when necessary, when the tide exceeds 1.10 meters. In this case, the 79 retaining walls that form the dikes will be submerged forming a barrier. To get up, the submarine hydraulic system will be used.

Each of the retaining walls will have a width of 20 meters, a height of 30 meters and a depth of 5 meters. 18 of this type will be installed at the entrance of Chiogia, a barrier of 360 meters, 20 in that of Malamocco, a barrier of 400 meters, and 41 in that of Lido, a barrier of 820 meters of length. The visual impact of these barriers cannot be denied, but ecologists consider that the damage will be more than aesthetic...

In Italian Mose means Moses, the man who in the Bible account led the Israelis through the sea. The name is a coincidence, because that Mose is the abbreviation of the project Modulo Sperimentale Elettromeccanico. We must see if this Mose can save the Venetians. 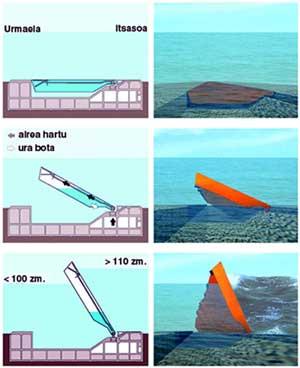 IX. At the beginning of the twentieth century, when the construction of Venice began, the environment itself and the scarcity of resources completely marked the way to build, having to resort to a special technique. The piles and the brick are an obvious feature of the architecture of the time. The piles were used to reinforce the earth's cargo capacity, while the bricks were used to build lightweight constructions. 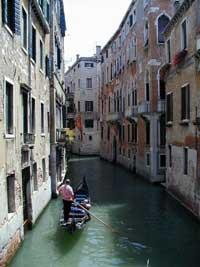 The pelotaris were made with edges, alders or thickets. When there was sand and mud in the bottom of the pond, the piles embedded in the clay formed the base for the buildings. They were woods of 2 to 4 meters spirally placed or in circle. On this base a wooden partition was built and then the building itself.

Although the use of piles was normal, given the characteristics of the floor, the lightness of the buildings was sought. Therefore, the buildings could not be of large size, the masonry walls should be fine and the capacity of the wooden beams should be very precise. The fact that the Earth was mobile also led the Venetians to a clear separation in the material. The materials, stones and bricks resistant to compression were placed in the vertical structures of the buildings; those that supported the flexibility, the woods, in decubitus, in soils.

The brick was never placed on the exterior of the buildings to avoid the contact of the sea water. If the water penetrated through the pores of the bricks, when evaporating, the salt would become crystal. Consequently, the bricks would have a higher volume, increase the pressure and create fissures. Thus, the part of the structure that the builders must remain submerged was protected with water repellent materials, without pores. Above the level of the structure that the tides would not arrive, the brick was placed.

Venice has always suffered floods, but not now. In recent years, the number of floods has increased significantly, becoming more frequent and growing. Behind it is the evolution of nature and human initiative. 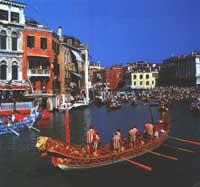 The eustatism, the rise of the water level of the sea, has much to do with the floods of Venice. Each year the water rises approximately 6 millimetres above. Another of the problems that Venice especially has is subsidence, that is, the sinking of the earth. This problem is not new, since the mud and mud lands have always been affected, but not as fast as now. Since the new port was built and accessible channels were built to the oil tankers, the sinking is much faster. Excavating in the freatic layers during the execution of the works, the sinking was notably favored. In fact, in these works, direct steps were built to water without taking into account the sinuous layout of water.

All this has caused an imbalance between the water of the pond and the water of the sea, which now enters more and faster. As a result, the output of underwater material is greater and the waves are easier to reach the city. When the pleamares provoke floods, the displacement by the city is not usually easy, although numerous steps are installed. And the bajamar also does its own; as more water comes out of the raft than before, many of the roads that use boats to transport people run out of water and many people do not move. In those moments the smell is not usually sweet either. 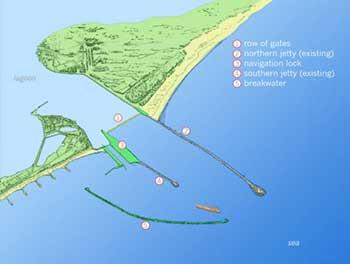 Published in section D2 of Deia.