Last May the London Zoo presented a new show: a colony of illegitimate mice, unique in the world's zoos.

The illegal satorrats (Heterocephatus glaber) live underground in East Africa and have a very interesting life. The version of the bees can be considered mammal. Living underground, they do not need vision and are almost blind. They also have no hair (hence the illegitimate adjective). With their large blades they roll on the hardest floor and transport waste through the tunnel in auzolan. 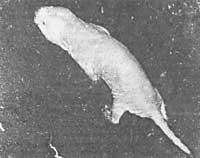 A colony can cover a tunnel more than three kilometers long. In a colony live more than 80 individuals, but only one female, the queen, gives birth. This can have up to 30 children in each child. It's a brand for a mammal! On the other hand, these animals have curious customs, heal the holes of the latrine and rub with urine. In addition, the queen's urine contains chemicals that prevent ovulation of other females.

The children of the queen are all workers and young children are specialized in the sanitation of the tunnels. As they grow they acquire other functions, such as surveillance or food collection. These animals grow and care for underground tubers that are food sources. In addition, illegal mice eat some excrement from others. And it seems that there are some who only have ice as food.

These rodents have a big difference with others: they grow slowly and live for a long time (13 years).

Those who go to London will have something to do from now on!