If the reader listens to the physicist Oppenheimer, 2. During the World War he thinks that Robert Oppenheimer, director of the Los Alamos Laboratory, where the atomic bomb developed. It will not occur to him at all that there is a physicist named Frank Oppenheimer, although we believe that his contribution to the evolution of science has been at least as good and profound as that of Robert. In this article we will talk about Frank Oppenheimer, an almost unknown brother of Robert who is worth it.

Frank Oppenheimer was born in New York in 1912, 8 years younger than Robert. As a young man he shared his time between horse, sailing and flute. 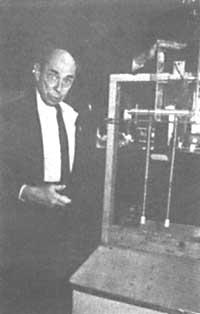 When he graduated from Johns Hopkins University in 1933 he went to Europe. First he worked with Rutherford in Cambridge, then went to Firence to the Institute of Arcetri. At the Galería di Uf> he spent a lot of time enjoying his wonderful works of art. There came a deep love for art.

Returning to North America in the late 1930s, he trained a four-year doctorate at the California Institute of Technology. She also met Berkeley student Jacquenette Quann and married her. Both joined the Pasadena branch of the Communist Party. This fact, as we shall see later, marked his life.

Next, Ernest O was inventor of the cyclloton. He began working at Lawrence's laboratory in Berkeley. His work consisted in the separation of Uranic isotopes by electromagnetism. This work opened the doors of his later work, helping him in the construction of the first atomic bomb. Although he first worked at Oak Ridge, he was soon transferred to "Los Alamos", directed by his brother. He could also see the first atomic explosion.

For the construction of the atomic bomb they worked on the Manhattan Project, like many other scientists, and later faced it with enthusiasm. This courageous attitude aggravated their political problems.

In the United States, the cruel anticommunist that began after the war is known. By the hand of Senator McCarthy, he was hunted for witches and accused of having anti-American positions and dismantling America. In this dark and black age of McCarthy many men of culture were persecuted and investigated, in addition to rage ( Charles Chaplin, Einstein himself, Joseph Losey, etc. ).

Among them are the Oppenheimer brothers. Robbert, who did not have a clear militancy on the left, suffered a small punishment, prohibited him from examining classified documents. However, Frank was severely punished because of the famous communist militancy. The punishment was aggravated because his former companion did not want to denounce him. He was not prosecuted but received the punishment otherwise.

At that time he was a professor and raped of the University of Minnesota who abandoned his work and research. It was finished as his experimental physical career, as the doors of other universities were closed to him.

With this sad event the life of the Oppenheimer changed radically. They abandoned the whirlwind of the modern world and moved as cattle ranchers to the Pagosa Spring of Colorado, located at 2,000 meters of altitude. They started with 200 cows and calves and in Frank's words, "We became obstetricians." Pagosa Spring's winters were harsh, aggravated by isolation.

However, he could not get rid of the persecution of the FBI; the people of the town often wondered about the things of Oppenheimer and also the postman of the people had to take note of the recipients and senders of the letters sent and received by Oppenheimer.

Oppenheimer's open character succeeded in breaking the distrust of his fellow citizens. He became president of the telephone company, with 13 subscribers, president of the land conservation commission and representative of the livestock association. Later came the need for a school science teacher from Pagosa Springs. Profiding this option Oppenheimer grabbed him and rejoined the teaching. 10 years after shipping from the University of Minnesota.

At that time the new era of artificial satellites was born. The Soviets just launched Sputnik and in the United States there was a panic that the Soviets could be more than the Americans. Good scientific and qualified teachers were needed. As one of these Frank Oppenheimer opened the doors of the university. Indirectly, to teach a teacher training course, in principle but in its entirety. He was appointed professor of physics at the University of Colorado.

The return to college led him to discover a dangerous problem, that the vacuum that was spreading between scientists and street people was growing wider.

In 1965 he returned to Europe with a scholarship to University College London. During this stay he had the opportunity to visit three museums that gave him an effective impression. The conclusion was that America needed new museums. At the Science Museum in Kensington, England, children could change and play with him. At the Palais de la Decouverte in Paris, schoolchildren taught and explained what they had taught. Oppenheimer impressed the degree of involvement of school teachers at the Deutsches Museum in München.

Figure: As elsewhere, Exploratorium viscera is shown. The workshop occupies the central space of the hall among other exhibitions. It is one of the attractions of the museum during his work. Everything is done and fixed.

When he returned to America he began daring everything he saw. He thought that museums in general and science museums in particular, rather than being a showcase to accumulate meaningless things, should be an agent that concerns the visitor. Not only should they be places to show the advances of science, which would contribute to sustaining that almost mystical attitude of street people towards science, but they would help bring the visitor closer to the knowledge of the foundations of science. He thought that this increasingly widespread vacuum between scientists and street people he discovered could be a good way to start closing it.

The Exploratorium, which opened in San Francisco in 1969, is the son of these ideas. It is a museum that wants to provoke exploration. (See combo). Although the Museum opened without applause, today it exceeds 500,000 visitors annually and has been copied worldwide. The museum is spacious and open, in order to facilitate the public the most direct contact with what is exposed in the museum. On this route, for example, you can get a valid entry card for six months.

Frank Oppenheimer will no longer be able to walk through the halls of the Exploratorium, looking at what visitors, especially children, explore and enjoy their successes. A bad lung cancer led him forever to the hunting grounds of good people in the early days of the year.