This Polish astronomer was born on February 19, 1473 in Torun. After the death of his father, being young Copernicus, he studied in charge of his uncle bishop. In Krakow he began to study mathematics and drawing until in 1496 he moved to Italy. There he spent the season of Bologna and Padua until 1503, studying medicine, canon law and astronomy. 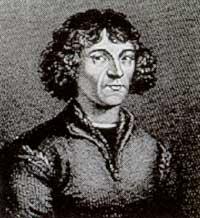 In the Italian environment, flavors questioned the traditional models of the universe. In the model of Hiparko and Ptolemy, for example, celestial bodies revolved around the Earth according to complex laws. But despite being mathematical expressions, the model did not serve to predict the position of the planets. The tables of King Alfonso X were the best in the previous centuries. Johan Müller Regio montanus introduced corrections to the tables, but they were only useful to some extent.

In Copernic's view, the tables to predict the position of the planets could be better calculated by taking the Sun as the center of the universe. Therefore, it had to be considered that the Earth was spinning around the Sun like all other planets.

The truth is that this idea was not new. Aristarchus, for example, had already released this idea in antiquity and Nicholas of Cusa also a few years ago.

However, Kopernik, in addition to providing the idea, developed the entire mathematical system to calculate the situation of the planets from this idea. To this end, it seems that Copernicus did not spend much time looking into the sky, since he did not dominate the field of astronomical observations. They say he never saw the planet Mercury, closer to the Sun.

The Copernic system solved many problems in the movement of the planets. In the new system, the orbits of Mercury and Venus were no more than a certain distance from the Sun seen from Earth, since both planets were closer to the Sun than Earth. On the other hand, the Earth rotated to an orbit smaller than Martitz, Jupiter and Saturn, so it was ahead of the latter, which seemed to go back in space.

In addition, the precesion of the equinoxes discovered by Hiparco could be explained differently. The full celestial sphere did not have to turn in the Copernicus system. The Earth was the one that rotated on its axis and the axis itself described two conical surfaces around its center.

However, there were some problems because Copernic considered circles the orbits of the planets and that the aforementioned problems were considered elliptic half a century later, that Kepler would solve.

Copernicus produced a book in which he expressed his entire system, but did not dare to publish it because he thought the Earth had movement.

In 1503 he returned to Poland and appointed his uncle as bishop zeal canon in the cathedral of Frauenburg. But no priest was ordained. He was a doctor of his uncle and also worked in the administration (especially after the death of his uncle).

Meanwhile, he summarized his ideas in a manuscript called Commentariolus and had a great esteem among European flavors. The mathematician Rheticus asked Koperniki to publish his book. Rheticus offered to supervise and comb the book.

Unfortunately, Rheticus had to leave the city and leave the book to a Lutheran shepherd to review it. Luther did not support Copernic's ideas and the Lutheran pastor put the prologue to the book, claiming that Copernic's doctrine did not alter the existing theories at all. He said that the tables of the planets only served to facilitate their use.

This prologue made the book lose its value and Copernic's lama staggered for many years believing that the prologue had been made by him (Kepler, in 1609, clarified who the prologue was).

The book of Copernic was published in 1543 and it is said that on the day of his death he was taught his first number. He died in Frauenburg (now Frombork) on May 24, 1543.