Waiting for the perfect reader

Three or four years ago we began to see among ourselves the so-called e-book reader. In 2010, Apple released its iPad, ideal for use as a reader. And after the success obtained, many other companies have taken out or are about to take similar tablets. Both types of devices have advantages and drawbacks, but it is still yet to discover the device that collects the best aspects of both. Researchers are working on creating this perfect reader, but is there room left in the market?
Waiting for the perfect reader
01/01/2011 | Leturia Azkarate, Igor | Computer scientist and researcher 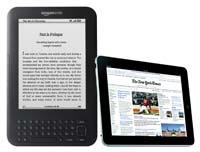 Kindle e-book reader and iPad tablet. It is still about to release the one that collects positive aspects of both types of devices. Ed. : Amazon.com and Apple.

The e-book reader, as we know today, was first marketed in 2006 by Sony Reader. But it's probably the most successful Kindle in 2007, the online Amazon bookstore. The Nook of the Barnes Noble bookstore chain or the numerous devices that came out later have not shaken Kindle. Nevertheless, there is a wide variety in the world of electronic readers.

E-reader or e-book reader works in electronic ink. This technology, unlike conventional CRT, LCD or TFT screens, does not constantly electrically illuminate the points of the screen: each time you have to change the image of the screen, in each of the cells that compose it places the corresponding color (white or black) with electricity, but then you do not need more electricity to maintain the image of the screen. This is the main advantage of electronic ink, its low energy consumption. Since the screen image should only be changed every time we change the page and this is not very common, the system is entered in hibernation until you are prompted to revisit the page. Then he wakes up, changes the screen image and goes back to sleep. Therefore, it takes a bit to pass the page, but the battery lasts the day. In addition, in full daylight and in the sun you can read very well the contents of the screen and the view is not so tired, since the screen is not backlit but reflective.

But it also has disadvantages: when there is not enough light, you can not see anything (as in paper), you can only show content in black and white or at most in gray tones (comics, magazines and newspapers with many photos or books and children's stories is not appropriate) and it does not serve for uses that require a quick change of the screen (see videos, for example).

The concept of tablet (no portable keyboard with touch screen), which Microsoft invented long ago, has become famous in early 2010 with the iPad extracted from Apple, and there are already many similar devices on the market, most with free Android operating system.

These devices have no technological novelty, the screens work with LCD technology (Liquid Crystal Display) used by laptops and other devices for a long time. Therefore, it presents opposite characteristics to the electronic reader: it is colored, serves to watch the video and also looks dark, but it does not look good with daylight, as it lights from behind, tires more the view and the battery only lasts a few hours.

We see that both devices have disadvantages. As for e-book readers, some consider it a simple technological link, which will last a few years to help a generation transition from paper to tablets. The Barnes Noble bookstore chain, for example, has discarded electronic ink and used LCD technology in the new version of its reader Nook. However, many believe that the battery life is too large for tablets.

In order to read books, magazines or comics and/or view audiovisual content, the ideal portable device should bring together all the good features of the two types of devices above. Why does it no longer exist? It is not possible or too expensive: the OLPC project (One Laptop Per Child), conceived in 2007 with the aim of helping through ICTs in the education of children in the poor countries of the world, already had a dual screen (it could work in both electronic and LCD ink), with an approximate cost of $ 200. Its inventor, Mary Lou Jepsen, continues to develop and improve this type of screens, but the inertia of the markets do not easily admit breakthrough innovations... However, such devices are not entirely ideal either. They can work in two ways, but when using the backlight you consume energy quickly.

Chinese firm Hanvon Technology has recently announced the next release of a device with this type of screen. Even if it is colored, it will use electronic ink technology, so it will have a low energy consumption, but without enough speed to show the video at the same time, and the colors will be in matt tones.

On the other hand, although not yet at the production level, the University of Cincinnati and the company Gamma Dynamics have developed an electrofluidic technology that consists in bringing the ink through the electricity to the cells of each pixel to the front or rear. You get enough speed to watch the video, you can see it in color and its consumption is low.

And studies for electronic paper (screens as thin and flexible as paper) are also about to yield results, even though this technology has been rare in recent times. Taiwango ITRI research center and AU Optronics expect devices that use electronic paper to be released in 2011.

It is therefore clear that today's e-readers have a lot to improve and that many improvements are about to come. But in the world of technology, as in many other occasions, the market rules and does not always impose the best technologically. In addition, the emergence in the market of these immature devices that have emerged driven by short-term commercial interests can harm the deployment of new devices. We hope, however, that as soon as possible, in the market a much better electronic reader predominates (in color, with low consumption and enough speed to watch the video).