"I like that combination of biomedical engineering and clinical research" 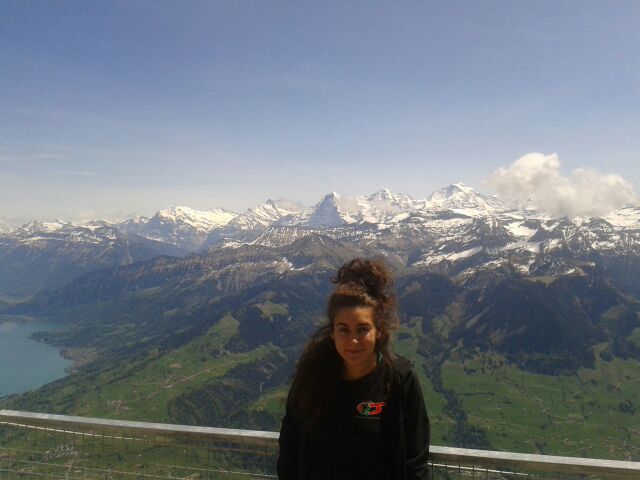 Nerea Irastorza Landa has had a laborious day. However, he has been delighted with his work. The thesis is ending in the field of neurorrehabilitation. He has specified that he has spent a couple of years with a patient with stroke paralysis, trying to recover mobility through a cranium-machine interface and an exoskeleton.

"With this interface we detect brain and muscle signals to know what movement you want to do and help move the arm and hand that has paralyzed depending on it, using a robotic exoskeleton," explains Irastorza.

According to him, it is not a matter of the patient using this robot at all times to move, but rather that an area of the brain that has not been affected by stroke, through a machine training, learns the lost function "to remake the connection between the brain and the tip and that the patient is able to move by himself". That is to say, even if the robot is used in therapy, the aim is that then it is not necessary and the patient recovers autonomy.

Irastorza has recognized that this implies a direct and deep relationship with the patient, which seems very enriching and also has a psychological and emotional aspect. "We have been very lucky because the patient makes a lot of desire and gives everything, and the truth is that it is appreciated."

Another aspect that has stood out is interdisciplinarity: "In fact, I am a student at a German university [University of Tübingen], where I am doing the thesis, with neuroscientist Ander Ramos Murguialday. Ramos works at his university and in Tecnalia. In this research project, Tecnalia works mainly in the field of robotics, and the German laboratory, especially signal decoding, in collaboration with the University of Berkeley. In addition, the Physiotherapy team of the UPV-EHU and the University of Brussels, in short, we have to work together, only with the robot is not enough. Daily therapy is performed in Donostia and in the Cruces University Hospital".

Meeting in the same project is really "motivating" for Irastorsa: electronic engineers, physiotherapists, biomedicals, signal processors, neurologists... In turn, he loves working live with the patient. "That daily relationship is very special," he says. He also likes what he does by computer, data analysis, etc. "I like that combination of biomedical engineering and clinical research. Finally, we investigated the whole process, from signal decoding to patient therapy. Seeing this direct application of the work fills me a lot".

Needless to say, more than that, seeing that the therapy gives good results. According to Irastorza, there are many types of therapies and different degrees of injury. For example, some patients, despite paralysis due to an injury, continue to retain their function even to some extent. With them, therapy is based on the increase of what they keep. "In our case, on the other hand, we treat patients with totally lost mobility."

Its goal is to achieve a minimum movement of being totally paralyzed. Then, with other innovative therapies or therapies that until now are used, it would try to improve mobility, but it is a first difficult step to get, and in it are Irastorza and his companions.

Once finished the thesis intends to continue in the same field. In fact, in Tecnalia has the opportunity to investigate in neurotechnology projects, which will address with enthusiasm: "Sometimes it seems that here we have nothing to do with what they have outside, but here there are also good research groups, doing very interesting things, and it is worth recognizing and promoting what is here."

Born in 1991. He completed his degree in Biomedical Engineering at Tecnun and later his master's degree in "Mechatronic Systems for Rehabilitation" at Pierre et Marie Curie University in Paris. For the realization of the master's project, he went to the Institute of Medical Psychology and Behavioral Neurobiology of the University of Tübingen (Germany), to the Neuroprosthesis team. She is now a PhD student in the same group within the program of the Max Planck Research Institute.