At first glance it seems that the following figure is only a shell, but it is not any shell, but neopiline. This is a Primary Age fossil that appeared 350 million years ago before dinosaurs. 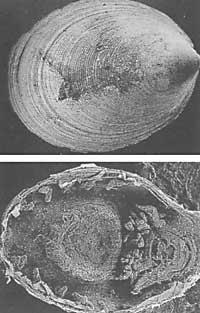 In 1930 the Swedish paleontologist Nils Odhner suggests that it could be the ancestor of molluscs. In 1957 it was discovered in the Pacific Ocean at 3,000 meters deep by the crew of the Danish Galathea. Like annelids with rings, nine pairs of muscles, gills and kidneys. He therefore affirmed Odhner's judgment: it was an intermediate level on the evolutionary path to molluscs.

In 1980, D. Philippe Bouchet studied in 1889 a series of small shells collected around the Azores Islands between 1,300 and 1,600 meters deep. A small shell (two millimeters) had a double blade, so it was Neopiline.

Since then it has been considered that this animal could be alive and found 300 kilometers from Galicia and in 1987 two other 2 millimeters have been found.

Now they look for what they can live in shallow depth. As we grow in shallow depth, we can know how these small fossils have been maintained over several times, explaining in passing how mollusks were formed.