The Basque whale, more than a myth

The rampant fishing that lasted for centuries pushed the Basque whale away from the sea of Bizkaia long ago. From generation to generation, with the aging of popular memory, the central element of the marine life of the Basques became the silent ghost of the ancient berths and shields.

Whale fishing was born around the 10th century in the Basque Country. Seeing that the yield obtained from cetaceans that occasionally sank on the coast was high, fishermen resorted to these living treasures. A species of whale was from the beginning the most loved by fishermen, the Basque whale.

The Basque whale ( Eubalaena glacialis) The misticete is a cetacean of suborder, that is, of the group of cetaceans with beards. Although it can reach a length of 18 m and a weight of 100 tons, usually it is around 15 m and 60 tons. It is black, although it may have some white scars on the bottom. Its main characteristic with respect to other whales is its head, with a large head (a quarter of the body) and a vault over the head full of parasites.

The mouth has a large curve with burrs of 2.5 m in length. Burrs are modified teeth, located on both sides of the upper jaw and with about 270 on each side. The whale uses these beards to catch his food, the colepods and the euphasiaceae. The whale swims with a semi-open mouth and uses the burrs as tamices, where the small crustaceans that form the zooplankton are chained.

On the surface of the water, during respiratory sessions between dives, there are usually between 5 and 10 minutes, being able to perform between 4 and 10 breaths during that time. The Basque whale has on its back two oysters (holes) to breathe, so the water flow characteristic of cetaceans, in the case of the Basque whale, is V-shaped, and is the reverse.

He is a migrant. Spend the summer in the northern seas, at this time of year must accumulate a lot of food, as it passes the winter and migratory travel without eating. When the waters of the north sea become too cold, they start the annual migration, each whale has its region to spend the winter and returns every year.

They reproduce in them. The dome is made in group, between a female and 2-7 males. After fertilization, the female has been around a year before birth in the womb. Childbirth occurs in a shallow area of the greenhouse in early winter. Midbreeding has a length of 5-6 m and a weight of 2 tons. In his first 6-10 months he will live thanks to his mother's milk, creating a deep bond between the two. 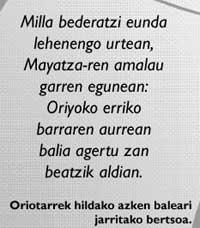 The whalers knew this mother-child relationship. They used the occasion to kill and lure the young whenever they could, with the certainty that the mother was going to approach following the breeding. The Basque whale also had other advantages for fishermen: it is an inert and easy to detect animal, so its common name derives from this slowness, the frank whale, which after dying keeps floating, which helped fishermen overcome transport problems.

Whale fishing on the Cantabrian coast. Recorded at Sañez Reguarte.

Fat predominated among the raw materials obtained from whales. The Basque whale gave a high fat yield, since 40% of the weight is fat. Moreover, its shave is fine, long and abundant, umbrella, corsets, etc. It was used to make, being exceptional. All this led him to become the main target of Basque whale fishermen.

The population of the Basque whale suffered fishing pressure from the origins of whaling. As the whale fishery grew, the population declined. In addition, selective fishing with breeding offspring and females meant leaving the population without offspring. Thus, the population that wintered in the sea of Bizkaia was progressively decreasing.

XVI. By the 20th century, the Basques were forced to migrate to the northern seas, Newfoundland and Greenland, in search of the whale. The northern whale ( Balaena mysticetus) was discovered in the Nordic seas. Being this larger than the Basque whale, both by the body and by the beards, the fishermen obtained more fishing performance from the northern whale. By then, British and Dutch had already started fishing whales, there was strong competition and the Basques began to abandon whale fishing.

The expansion of whale hunting was accompanied by an increase in the excessive fishing of these two species that reduced populations. XVIII. The rarity of finding copies of these two species by the end of the 20th century caused them to be considered expired. The whaling industry had already started the exploitation of other species and, taking advantage of technological advances (Arpon Canyon), had channeled the disaster of these species.

The whalers knew the special mother-child relationship. They used the occasion to kill and lure the young whenever they could, with the certainty that the mother was going to approach following the breeding. The Basque whale also had other advantages for fishermen: it is an inert and easy to detect animal, which after its death keeps floating and helping fishermen overcome transport problems.

For example, XX. If at the beginning of the 20th century there were 206.000 blue rokuales and 500.000 common rocky, at present the populations of both species are estimated at around 1.100 and 107.000 specimens, respectively. During the last two centuries the Basque whale, at least in the North-East Atlantic, has been a true marine ghost, since it was considered very little, and when it appeared, it died and was shown as the ancient mammals.

Information on such a rare species in the last two centuries has been very scarce and often contradictory.

The current Basque whale population is divided into at least two main groups (see map). A group living in the North Pacific has about 220 specimens. The second group is the North Atlantic, where you can also create two subgroups: the main group 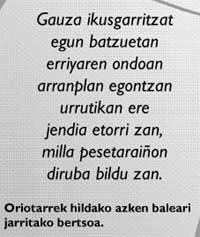 The main obstacle to making objective forecasts about the future of the Basque whale is the lack of information. The few population sizes recall the problems observed in other similar populations, such as the isolation of reproductive individuals and the lack of genetic variability. On the other hand, those caused by marine pollution, among other things, by the reduction of the areas of admission of populations, cannot be forgotten. Finally, although since 1935 this species enjoys comprehensive protection, illegal catches have been made, as is the case of fishing for two specimens in Madeira in the 1970s. 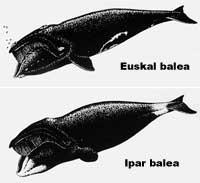 Basque whale ( Eubalaena glacialis) and Northern Whale ( Balaena mysticetus). The latter is larger than the Basque whale, both in body and beard size.

If you want to carry out a real recovery, it is essential to know the size and populations existing today. The step after monitoring the populations would be to channel the protection of summer and winter areas, especially those of wintering, where reproductive processes occur.

Eubalaena australis is a species closely related to the Basque whale. It moves in the southern hemisphere, near Antarctica (see map). Although some authors considered it to be of the same species, the IWC (International Whale Commission) classified it as a different species based on existing geographical isolation.

This southern whale was also massively exploited by the 19th century. It was practically extinct at the end of the 20th century. However, the management carried out around this species has provided encouraging results. In addition to the total protection since 1935, the Argentine government declared "intangible zone" to the reproductive regions of these populations. Consequently, the population of this species has remained slow but growing, placing the current population around 3,000 individuals.

Therefore, it has been confirmed that good management has good results. These good efforts have been based on a true will for conservation. Following such examples, perhaps the bertsolaris have the opportunity to sing verses about whale reappearance. 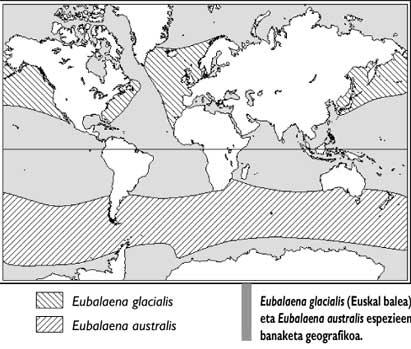