Bacteria, in general, usually have a cover, a special wall that protects internal structures. And its components and structure condition the behavior of each bacteria. The molecules in this wall limit antibiotic resistance, sensitivity to viruses or attacks of the immune system or the maximum temperature, pressure and acidity they can withstand. 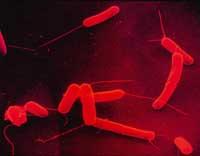 According to researchers, such research can have many applications. To begin with, they believe they can develop the method of separating bacteria through covers of different colors, but they have also given more examples. For example, bacteria can be used to test new drugs by placing lids similar to human cells, or they can be used in vaccines disguised as pathogen.