Aragonese glaciers, from white to black

If the current trend does not change, the Aragonese glaciers will disappear sooner or later. In that there is no doubt. And it is clear that temperatures and rainfall affect glacier evolution. However, the degree of acceleration of loss as a result of climate change is more debatable. The debate can last a long time, but in the meantime, the Aragonese glaciers are being lost.
Aragonese glaciers, from white to black
01/03/2008 | Galarraga Aiestaran, Ana | Elhuyar Zientzia Komunikazioa

The glacier complex of the Maladas is the largest of the Pyrenees. To the left is Aneto and, to the right, Coronas, converted into a fridge.
J. Chueca
Javier Chueca Cía is professor of Physical Geography at the University of Zaragoza and specialist in Glaciology. He has been researching mountain glaciers for years and he discovers first-hand how the Pyrenean glaciers in the Spanish area are being lost.

Glaciers are moving and persistent land ice masses. The ice of the glaciers is generated in the compaction of the snow under pressure, and due to the required conditions, these are very special formations. They are renewed thanks to the snow that makes in winter, but in summer they lose ice because it melts. The difference between the snow received and the molten ice determines the evolution of glaciers.

Today there are only glaciers in a few areas of the Pyrenees. All of them are at high altitude, under peaks above 3,000 meters, almost always within small shaded circuses; in short, in areas where solar radiation is low and rainfall occurs in snow.

It has not always been so. From the end of the last glaciation, the Pyrenean glaciers reached their maximum extent in the Little Ice Age (1550-1830). However, in the first third of the nineteenth century, the climate began to temper again and since then the glaciers have been decreasing until reaching their current state. Many of the ancient glaciers have become simple refrigerators or have disappeared. Therefore, in Spain there are only four areas where there are true glaciers: In the massifs of Infiernos, Monte Perdido, Posets and Maladeta. All four are in Huesca, in the middle of the Pyrenees. 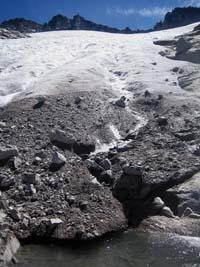 Fusion lake under the eastern glacier of Maladeta.
J. Chueca

In Maladas, for example, Chueca and his team have studied the evolution of the glacier since the end of the Little Ice Age and have related this evolution to climate factors. This study explains that since the 1820s the glacier has receded in length and thickness. At first, especially between 1857 and 1901, the loss was very rapid. At that time, rainfall was low, both in winter and throughout the year, and temperatures were higher than normal. This meant a great loss of glacier mass.

In the coming decades, glaciers continued to decline, but at a lower speed. Between 1958 and 1981 the glacier stabilized remarkably. The 1960s was especially dry, but the 1970s, especially in the second half, was very different. Summer temperatures were half a degree lower than average temperatures in this period, while winter precipitation exceeded 13% the average.

Chueca is the Spanish coordinator of the GLIMS project. They use the images collected by the ASTER satellite. The image above shows the entire Pyrenees, dating from 1 August 2000. Snow is blue, green, vegetation, pink and dark blue, rock and white, clouds.
(Photo: NASA/GSFC/METI/ERSDAC/JAROS US/JAPAN ASTER)
However, since 1981 the trend has revolutionized and the glacier disappears as fast as at the end of the Little Ice Age. Proof of this is the fact that in the 1990s the glacier of the Maladas was divided into two, eastern and western. The loss is intimately related to the temperatures and rainfall of recent years, since it is the warmest and driest time of the whole period analyzed by the researchers. Thus, the glacier has begun the XXI with 35.7% of the area occupied in the 1820-30s. XX century (152.3 hectares in 1820-30 and 54.5 in 1997-99, just over a third).

However, in the Maladeta massif, in addition to the eastern and western glaciers of the Maladas, there are more glaciers. Precisely, the glacier complex of the Maladas is the largest and best preserved on the Spanish side. It is located in the valley of Benasque and its main summits exceed 3,000 meters: Aneto, with 3.404 meters, is the highest in the Pyrenees; Pico Maldito, with 3.350 meters; Maladeta, 3.308; Alba, 3.118...

The massif extends from northwest to southeast, so most of the remaining glaciers currently face northeast. Only the one in Coronas is southwest, but it has already become a kind of fridge and is difficult to endure. The rest of the glaciers of the massif (east and west of Maladeta, Aneto, Barrancs and Tempestades) have also lost great surface and thickness in the last two decades. According to Chueca's latest measurements, almost half of the area of the Maladas glacial complex was lost until 2006 (from 240.62 hectares to 125,74).

After the glaciers of Maladeta, the largest are those of Monte Perdido, but there they have quickly receded. In 2006, the entire glacier of Monte Perdido occupied 50.17 hectares, representing 44.3% of its surface in 1981. The other glaciers remaining in the Spanish part have lost even more: The glaciers of the Posets massif occupy 18,51 hectares, a little less than a third of its surface in 1981, while those of Infiernos occupy only 6,96 hectares, approximately a quarter of what they had in 1981. 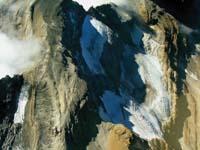 Upper and lower glaciers of Monte Perdido. The lower one is the one that is in the best situation and the most dynamic.
J. Chueca

Of course, the climate and mountains do not know the administrative-political borders imposed by humans and the glaciers of the French Pyrenees are evolving in a similar way to the Aragonese glaciers. For example, in summer 2006, researchers from the universities of Bordeaux III and Paris IV conducted a comprehensive study on the glacier of Ossoue. This glacier is located under the highest peak on the French side of the Pyrenees (Vignemale, 3,298 meters) and currently occupies about 50 hectares, about half of its surface at the end of the Little Ice Age.

The researchers analyzed the thickness of the glacier by radar, point by point, comparing the data with the previous records. Among other things, they observed that in recent years (since 2001) it is melting much faster and faster and faster than before. In addition, in general, some years of low snow are occurring, and in times of intense snow (winters 2002-2003 and 2003-2004), it has not been enough to match the melt in summer. An average annual loss of 1.5 meters in thickness is estimated.

The photo on the left is from the 1920s and on the right of 2001. In comparison, a significant loss is clearly seen.
R. Rilter
In other glaciers, researchers have observed a similar trend: the Taillon glacier had lost a few meters in the previous summer, but in 2005 it receded 20 meters. However, the other glaciers, despite being smaller than Ossoue, are not decreasing as fast as he is. As the researchers have explained, snow accumulation, orientation, the presence of rocks on top, etc. cause a greater or lesser response to climate factors and the Ossoue glacier does not present the best survival conditions.

For many experts, humans are responsible for an increasingly rapid loss of glaciers. In fact, emissions of gases into the atmosphere from human activities produce the greenhouse effect, which is causing climate change that goes beyond what would actually occur. This is believed to have made temperatures in the Pyrenees higher than normal and rainfall lower. This causes glaciers to lose faster and faster, but it is difficult to know how much human activity is affecting.

The WGMS association keeps track of the world's glaciers. In the graph, thickness balance of American and Eurasian glaciers, from 1980 to 2006.
WGMS

However, some have no doubt. Greenpeace Spain published a report on glaciers in 2004. "The disappearance of the glaciers of the Spanish Pyrenees. Under the title "Climate change in sight", the authors are Enrique Serrano and Eduardo Martínez de Pisón, professors of Physical Geography. With the data of the researchers, and based on the climate projections of the future of the international association in charge of climate change (IPCC), it is expected that in the mid-21st century the current glaciers will disappear totally or partially.

These pessimistic predictions have occurred elsewhere in the world, as glaciers are receding all over the world. For example, according to the European Environment Agency, by 2050 three-quarters of the glaciers of the Swiss Alps will be missing. And many scientists directly relate loss to climate change that is causing human activity. If the current trend does not change, the tops will go from white to black.

Javier Chueca: "As a glaciologist, it seems to me a privilege to witness this process and be able to analyze it in real time"
Javier Chueca Cía is professor of Physical Geography at the University of Zaragoza. An expert in glaciers, he leads a research project on the glacier dynamics of the Aragonese Pyrenees funded by the Government of Aragon since 1997.
Many relate glacier loss to climate change. We would like to know if you are of the same opinion.
Yes, but with nuances. Climate change is accelerating the loss of Pyrenean glaciers, but this loss began long ago, at the end of the small Ice Age, before we started what we call climate change. Somehow, glaciers are losing to climate change more than they would lose in the 'natural' climate situation.
Besides the ice mass, what else is lost with glaciers? What will this loss bring? 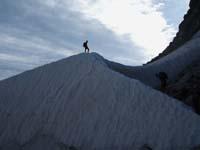 Aneto Glacier.
(Photo: I. Illarramendi)
In the Pyrenees something unique will be lost, an element of enormous landscape value. This will mean moving from a landscape of clear high mountain characteristics (on a much smaller scale, but similar to those of the Alps, the Rocky Mountains and the Himalayas) to mountains that only have seasonal snow (like most mountain ranges on the planet). From the landscape point of view, we will pass from the first to the second.
For many people the loss of glaciers is an unfortunate phenomenon. To you personally, what feeling does it produce to be a direct witness to that loss?
As a glaciologist, it seems to me a privilege to witness this process and be able to analyze it in real time.
And considering wider times, the loss of glaciers is taken differently?
Yes. Given the history of the planet, we know that the last two million years have been glacial/interglacial cycles throughout the Quaternary. Therefore, it is to be assumed that glaciers will continue to appear and disappear. It is regrettable that human activity has accelerated the current loss, but it is known that the Earth has been preceded by a greater warming than the current one, due to the greenhouse effect of natural origin, and that it has concluded with the creation of new balances in the hydrosphere-geosphere atmospheric system.
Galarraga de Aiestaran, Ana
Services
More information
2008
Services
028
Physics
Article
Services