Perhaps it is not a question of a penis

The history of science shows that it has been worked from an androcentric point of view, and today it continues to predominate. In recent years, researchers from all fields are trying to change this trend. Example of this is what was said by anthropologist Holly Dunsworth in the question of penis measurement.

Dunsworth, an evolution expert, believes that obsession with penis size and testicles is evident, even at the academy. Thus, he recalled that there are quite a few hypotheses that in evolution tend to impose themselves on the great penises. One of them is that the woman chooses men who have great penises to copulate, as they will give healthy children or give them more pleasure. Another hypothesis is that competition between men is the advantage of having a large penis is the advantage of taking out the seed that a previous competitor has left in the woman's vagina.

For Dusworth, however, scientifically it makes no sense to focus on the penis without taking into account the vagina. And perhaps in this case it is not a penis, but a vagina. According to the anthropologist, childbirth has directly influenced the vaginal evolution: our species has a large brain and, therefore, a large skull, so the large beneficial vagina because it facilitates the delivery. And the increase of the vagina would mean the big penis priority.

It is, therefore, about what mattered or where attention is paid. But, as Dusworth himself recognizes with irony, it is more attractive for everyone to talk about sex than about childbirth, even for scientists. 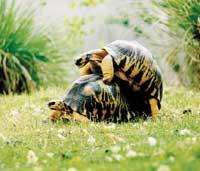