As every year, the Nobel Academy of Sweden has awarded the Nobel Prize. If we should highlight something about the scientific awards given this year, it is the consensus of the scientific community on the suitability of the recipients. The recipient of the Nobel Prize in Medicine, the Japanese Susumu Tonegawa, has made important contributions to the understanding of the human immune system. The Nobel Prize in Physics and Chemistry has been awarded to researchers working in highly demanding fields.

Japanese immunologist Susumu Tonegawa has received this year the Nobel Prize in Medicine for the formation of antibodies that the body uses to fight diseases. The immunologist solves a problem that altered.

Tonegawa is a biology professor at the prestigious Massachusetts Institute of Technology. However, the research granted him did not carry them out, but at the Basel Immunological Institute between 1971-1981. In this period he worked with theorist Niels Jerne, Nobel Prize in Medicine in 1984. 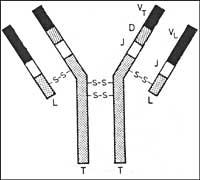 Appearance of human antibodies. They are made up of four protein chains: two long and two short. The chains are joined together by sulfur bridges.

Tonegawa is a practical researcher. In a report he published in 1976, he said he had seen how the different genes that cause the formation of antibodies are collected on a chromosome.

Tonegawa's sessions confirm a theory published in 1960 by William Dreyer and Claude Bennett. According to these authors, the different proteins to form antibodies are combined from chance or November. At that time no one could explain the mechanism that could be carried to the combination. The problem was how the body could make billions different. These antibodies are usually waiting for viruses and bacteria to enter the body. Of all of them, only one will be adequate to combat and destroy the invader.

Antibodies are produced by several blood cells, called B cells. In an adult man there are about one billion B cells and each is capable of creating an antibody of a special type. The number of antibodies therefore cannot exceed the number of B cells.

Human antibodies are formed by four protein chains. Two of them are long and two short. The chains form a Y-shaped layout (see Figure). The branches of Y are very variable and it is precisely these that identify the enemy. Also through them they are linked to the invader. If they are united, the tail of the antibody suffers changes and causes the start-up of the immune system. Then the immune system puts all its weapons in action to clean the stranger.

The variable part of the long chain is limited by three genes: genes V, D and J. The short chain has only V and J genes. In humans there are 200 V genes, 20 D genes and 4 J genes.

Tonegawa's sessions have revealed that these genes are randomly combined during the development of the mammal. Thus, thousands of different variable parts are formed. And as in each antibody there are four variable parts, the possible combinations go up to the billion.

As seen, the Nobel Prize grant to Tonegawa has been very adequate. However, at a time when research works are done in a group, it is surprising that he is only awarded the prize and that is what he insisted. 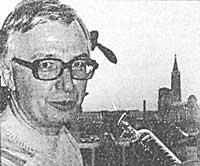 Working in the laboratory.

The Nobel Prize in Chemistry has been awarded this year among three people. They are two Americans (Charles Pedersen and Donald Cram) and one French (Jean-Marie Lehn). The award honours the work done by these three people in the identification of molecules, when it is known as "Host Chemistry/Guest". The identification of the molecule has opened a wide and varied field of research, not only in chemistry but also in biology, medicine and material science.

Therefore, chemicals understand how a giant molecule, such as proteins, identifies another molecule and selectively binds it with it. Biologists have also been able to understand how antibodies identify antigens. And with the same bases, the chemicals have designed sensors to detect poisons and toxic products in the environment. In medicine it has been possible to design new drugs. The functions performed by giant enzymes are possible by small molecules synthesized in the laboratory.

The concept of molecular identification is the son of a chiripa. 24 years ago, working for the great chemical company Pedersen Du Pont, made an unexpected discovery. In one of his sessions he used a contaminated raw material. As a result of the reaction I obtained a side product along with the main product. As a chemical responsible for Peders, he was responsible for identifying and pouring the side product by the sink. He realized that the compound had a very special and unconventional structure. In the form of a ring there are 12 carbon atoms and 6 oxygen atoms, including two carbon atoms. The chemicals now call cycleter or crown ether to this ant- laminate.

When they began to study the chemistry of these mopeds, Pedersen had great surprises.

Sodium hydroxide, caustic soda, is not dissolved in organic disobants such as benzene and ether. But when Pedersen added its side product to the organic solvent, sodium hydroxide is completely dissolved. What was the new compound doing? 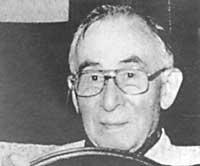 However, the compound of Pedersen is capable of dissolving ionic substances. Its six oxygen atoms surround sodium ion in the same way as six water molecules do. Sodium ion is seen as crowned and therefore Pedersen told his new compounds the ether crown.

One of the first applications of the ether crown was the dissolution of ions such as sodium and potassium in organic solvents. Some chemical reactions need these metals to advance. Some of them also occur only in organic solvents and the transfer of ions from the aqueous phase to the organic phase can be a problem. The corals give solution to this problem.

Chemicals can synthesize corals of any metal size and take advantage of this pathway to extract valuable metals from the mixture. The placement of a specific ether crown on an electrode can be used to detect a certain metal. Biologists have also benefited from this discovery. In fact, they have been able to understand how non-aqueous cell membranes cross the action pathway of antibiotics and sodium and potassium ions, amphibians. In the second case, it is considered that in the ether crown membranes open holes for those ions to pass.

The coral eteres do not cover only metals. They can also contain molecules. At this point comes the second prize winner (Donald Cram) in this story.

Cram is currently a professor at Los Angeles University in California, but when Pedersen discovered coral éteres he worked for Du Pont. Cram realized that the synthesizing of the crown and special ether allowed to separate the chiral molecules. The only difference between these molecules was that one mirror image of the other was identical to other properties. The separation of chiral molecules is what enzymes do, since in biochemical processes only one of the chiral molecules is effective. Thus, he thought that the crown by means of the éteres could only be extracted one of the components of the chiral mixtures and that, by this way, he could synthesize special chemical, pharmaceutical and agrochemical products. 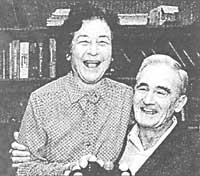 Cram and his wife.

The Cram laboratory was dedicated to the production of articles for 1973. Its first success was the synthesis of an ether crown capable of separating the chiral amino acids that are part of proteins.

He has invented the chemical guest host name. The ether crown would be a guest and its molecules are invited.

Cram's laboratory also synthesized other molecular structures that could fulfill the functions of ether crowns, in the form of empty spheres and semispheres. They are spherical and hemispherical.

The third prize is one more branch of the Du Pont connection. Jean-Marie Lehn also worked for Du Pont, but in another branch. It occurred to him that Pedersen's two-dimensional crown extended to the third dimension. For this purpose, it replaced two oxygen atoms of the original crown with two nitrogen atoms. Through nitrogen atoms, it interconnected two ether crowns with each other, obtaining cyclist compounds. They are the cryptocurrencies. Cryptocurrencies selectively extract metallic cations rather than crown ether. In addition, Lehn has designed hosteleros that identify biologically efficient substances such as neurotransmitting azetikolin.

Thanks to the work of these chemicals, it will not be possible to synthesize an enzyme in the laboratory, but to synthesize smaller and simpler molecules that fulfill their same functions.

...And couple of physicists

This year's Nobel Prize in Physics has surprised a little bit the scientific environments. The problem is not that Georg Bednorz and Alex Müller are not worth it for their outstanding work on superconductors, because they all say they are worth it. The spoon is speed.

Bednorz and Müller have broken all records.

Bednorz and Müller have been awarded for raising the driving barrier of superconductors in 12ºC. This discovery took place in early 1986 and was not published until September of the same year. Therefore, the Nobel Prize has been received just one year after the publication of its results. This fact is surprising, since the Swedish Academy of Sciences, with the intention of being very prudent and rigorous, leaves decades until it awards a discovery. Normally, a zefoic progress takes years to have great acceptance and that is what the Swedish Academy expects.

Bednorz and Müller work at the IBM laboratory in Zurich and it is noteworthy that last year's Nobel Prize in Physics has been awarded by Gerd Binning and Heinrich Rohrer from the same laboratory. This fact is a sign that the latest research has moved from the university to the laboratories of large transnational companies.