Science: the senses in the digital age

The UPV/EHU, the Provincial Council of Gipuzkoa and Bic Berrilan have organized a science workshop in Donostia. As Yosu Yurramendi of the UPV-EHU said in the presentation of the workshop, the logo perfectly reflects what the themes were: senses, science and digitalization 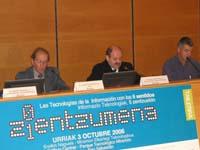 Experts from here and abroad were present at the science workshop.

The workshop focused mainly on two areas, disability and food/gastronomy, and was held in two parts, with four lectures at the beginning and after the exhibition.

The first conference, given by Julio Abascal, of the Department of Architecture and Computer Technology of the UPV/EHU, focused on the efforts being made to overcome the limitations of people with disabilities.

Abascal noted that “through the senses we can obtain information about the environment and interact with it. People who have more or less limited senses, however, have trouble interacting and appropriating the environment. Therefore, our job is to compensate for the limited senses.” 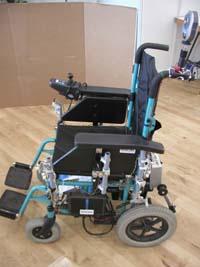 Autonomous wheelchair prepared in the Laboratory of Human Interaction for Special Needs of the Department of Architecture and Computer Technology of the UPV/EHU.

In the development of tools to support these people, researchers use two ways. On the one hand, they replace limited meaning on the other, for example, they create tools to convert visual information into auditory. The other way is to increase sensory capacity through external sensors. For example, preparing robotic wheelchairs for people with reduced mobility.

Both ways are being worked out and Abascal believes that in the future it will be possible to replace the senses. For this, “it is essential to improve communication between artificial senses and the brain”.

He was followed by Andrey Bratov. Bratov, visiting professor at the Sensors and Biosensors group at the Autonomous University of Barcelona, spoke about the evolution of flavor sensors. On this subject, he outlined the steps taken on the path to electronic language.

As he explained, it is undeniable that much progress has been made, but Bratov himself acknowledged that it is very difficult to devise an instrument capable of taking the flavor in its entirety. And it is that humans not only perceive the taste through the taste buds of the tongue. The smell, the temperature, the color, the hardness… everything has importance in the taste. “Imagine a green milk or hot ice cream. Probably, for those who taste them, they will not have the taste of white milk or cold ice cream. That is why it is so difficult to create an artificial sense capable of savoring.” 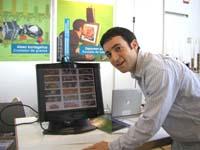 Presentation of the Dan Maynes-Amizade system from Standford University.

However, spectacular flavour tools have been invented. One of them was the following speaker: Dan Maynes-Aminzade, researcher at Standford University's Computer Interaction Laboratory. In fact, it presented the interface to capture the desired taste. At the end of the conferences, at the same workshop-exhibition that was held, he exposed how it worked and the conference revealed the research work behind it. 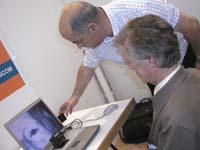 The last speaker was Derrick de Kerckhove, Director of the McLuhan Program for Culture and Technology at the University of Toronto. He analyzed the senses, the perception, the digitization of the senses and the artificial senses from the artistic point of view. An interesting talk.

The tools and applications mentioned in the conferences were displayed in the next exhibition. In this way, you could see how they worked and sometimes try yourself. Undoubtedly, it was a day to put all the senses on alert.