Stem cells from the human embryo obtained by cloning

Advanced Cell Technology (ACT), a private research firm, has published the development of the human embryo by cloning. It can be an important step in the effort to learn how to reprogram cells.

This is the first time the cloning of the human embryo is published. The cloning of the embryo to a human somatic cell, which is not germinal, that is, it is not an egg or a sperm, has been possible thanks to the withdrawal of the nucleus and its introduction in an egg without nuclear genetic information, the same technique used so far with other species of mammals. In this way they have developed a genetically identical embryo to this original somatic cell.

If the embryo was introduced into the uterus of a woman, a new living being would develop (what is known as cloning for human reproduction), but if the embryo is manipulated within a few days of producing, stem cells could be extracted. According to ACT, the latter is the only use that will give it, that is, the therapeutic cloning of embryos.

Reproductive cloning is prohibited in most countries. Therapeutic cloning is authorized in the US and the UK. In the US. Public money cannot be used in research for the purposes of therapeutic cloning (although private companies can do it by themselves), but in the UK it has also begun to be done with public funding. In Euskal Herria, the use of stem cells from excessive embryos in in vitro fertilisation for research is also prohibited. 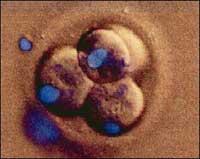 Stem cells can be specialized until they have any type of body cell. Previously, human stem cell lines have been developed by other pathways other than cloning, but their use in human transplants is scarce. And it is that the body would recognize them as strangers. However, those obtained by cloning will allow obtaining organs, tissues and cells with genetic and somatic characteristics of a given person. Thus, in case of disease, each would be the source of tissues and organs for transplants. This would avoid the problems caused by transplants and open the way to treat degenerative diseases such as cancer, degenerative diseases of the nervous system such as Alzheimer's and Parkinson's, AIDS, diabetes, etc.

In cloning there is a particularly difficult process, the reprogramming of somatic cells. The cell controls by methylating the DNA which genes should be expressed and which not; it associates the molecular mark – the methyl – to the genes that do not want to be expressed. The reprogramming of germ cells takes place in obogenesis and spermatogenesis. After fertilization and during the development of the embryo, methylation changes. Thus, in an embryonic cell some genes will be expressed and as they go ‘aging’ and specializing others. Since the somatic cell to which DNA has been extracted is the ‘old’ cell, the resulting embryo would not have the characteristics of the embryos.

Of the embryos in general stem cells can be obtained, but the cloned embryo will have the characteristics of an ‘old’ cell (DNA extracted from a developed somatic cell) and will not form stem cells, but the original DNA cell used for cloning. Therefore, when entering the egg the DNA should be reprogrammed, modify the molecular marking so that it develops as a ‘young’ cell. But what is a slow process in obogenesis and spermatogenesis, here it must be done in a few minutes, so errors occur. This is one of the most serious problems of cloning, DNA reprogramming. But this work that has just been published has again shown that it is possible.

However, this reprogramming needed to clone generates serious problems in the transmission of genetic information by doubling the cells. Therefore, if they wanted to clone man with this embryo, it would be an important obstacle, since fetuses are not viable – they die before birth.