Ice in tears in the Land of Fire

In order to investigate the most unknown ice zones in Patagonia and Tierra del Fuego, the three glaciologists have carried out an expedition: Elgoibarrés Eñaut Izagirre, Vitoriano Ibai Rico and American Evan Miles. They have explored and mapped the southernmost and unknown ice zone in all of South America: Cloue ice zone. It is located on the island of Hoste, in the midst of a labyrinth of hielo.With ice, heavy hailstorms and hurricane glacial winds, they have plunged into territories not trodden by anyone. And waiting for him, the sailboat Northanger, which has had to overcome harsh sailing conditions. Science is always an adventure, but this time it can be written in capital letters. 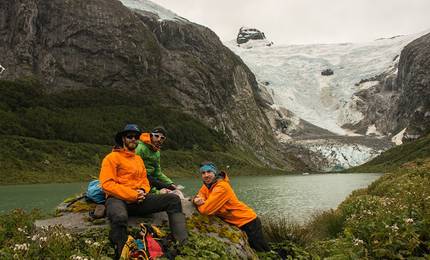 "It was impressive to see his greatness. Dimensions of its landscape. We were in the veil and we saw beside it some walls of 1,500 meters. A little further north, even 2,500 meters. Impressive walls, impressive glaciers, constant ice falls in the fjords… It’s amazing! geographer Eñaut Izagirre remembers everyone with emotion. 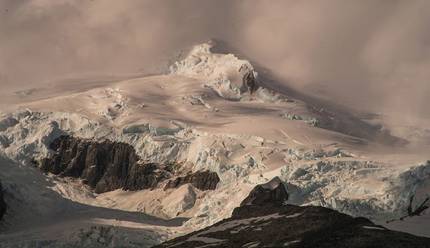 At the summits and vertices of the icy mountains of Darwin Mendikate, the shapes of ice mushrooms are typical. Ed. Incognita Patagonia 2016

The Cloue ice area is a kind of labyrinth of small islands, fjords and canals, still unknown. In this way, the three researchers worked to develop a cartographic map of the area, but they wanted to do so as expeditions of yesteryear: to describe the geography and make the map more accurate possible, the expedition has had to cross large areas of ice, climb mountains without any ascension, describe fjords hitherto unknown, navigate channels of difficult access to sailing and face spectacular winds. 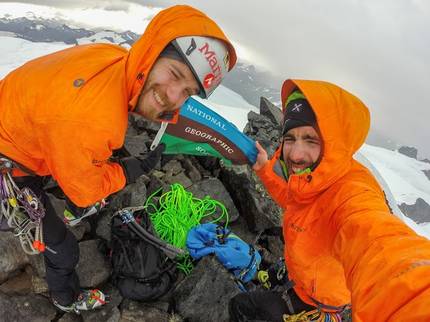 In fact, in the wind the grandeur of the Land of Fire is also appreciated. “I think the conditions have really made the expedition hard. They are great mountains, as the great climber Charlie Porter called them. In height they are not very high, about 1,400 meters high, but you are at sea level and just open to the entrance of the Pacific winds, very exposed to the winds. All the winds that come from Antarctica and the West touch him there and then the wind turns him around the world and, having no continents in that latitude, they touch you again. It’s amazing!”

Researchers and climbers have climbed the mountains for pure pleasure, but also to determine the heights. “There were only heights calculated by satellite image, and the mists and shadows of the escarpments cause distortions. From the heights measured by us, to the above measures, we have seen that there is an error of 30-35 meters”.

Ibai Rico, facing strong winds from Antarctica, high in the ice zone. In the surroundings it is almost impossible to make weather forecasts and, even when it was thought that they were going to have a quiet time, the expeditionaries have suffered huge ventures and storms. Ed. Incognita Patagonia 2016
Izagirre and Schinas download data from the weather station located in the Pia fiordo. They are stations installed by the mountaineer Charlie Porter and during the expedition they try to recover them. These stations will be essential to establish the relationship between weather conditions and glaciers. Ed. Incognita Patagonia 2016

They wanted to investigate the entire ice field. To learn more about glacier history and relief, the three glaciologists have mapped the shapes and accumulations of glaciers through an ice of thousands and thousands of years. “In the Basque Country there have been some glaciers in periods of greater frost, as in Aralar, but there is no culture of glaciers. In short, the glaciers in the Pyrenees are also very small. That is why we are surprised by the word glaciologist”, Izagirre explained. 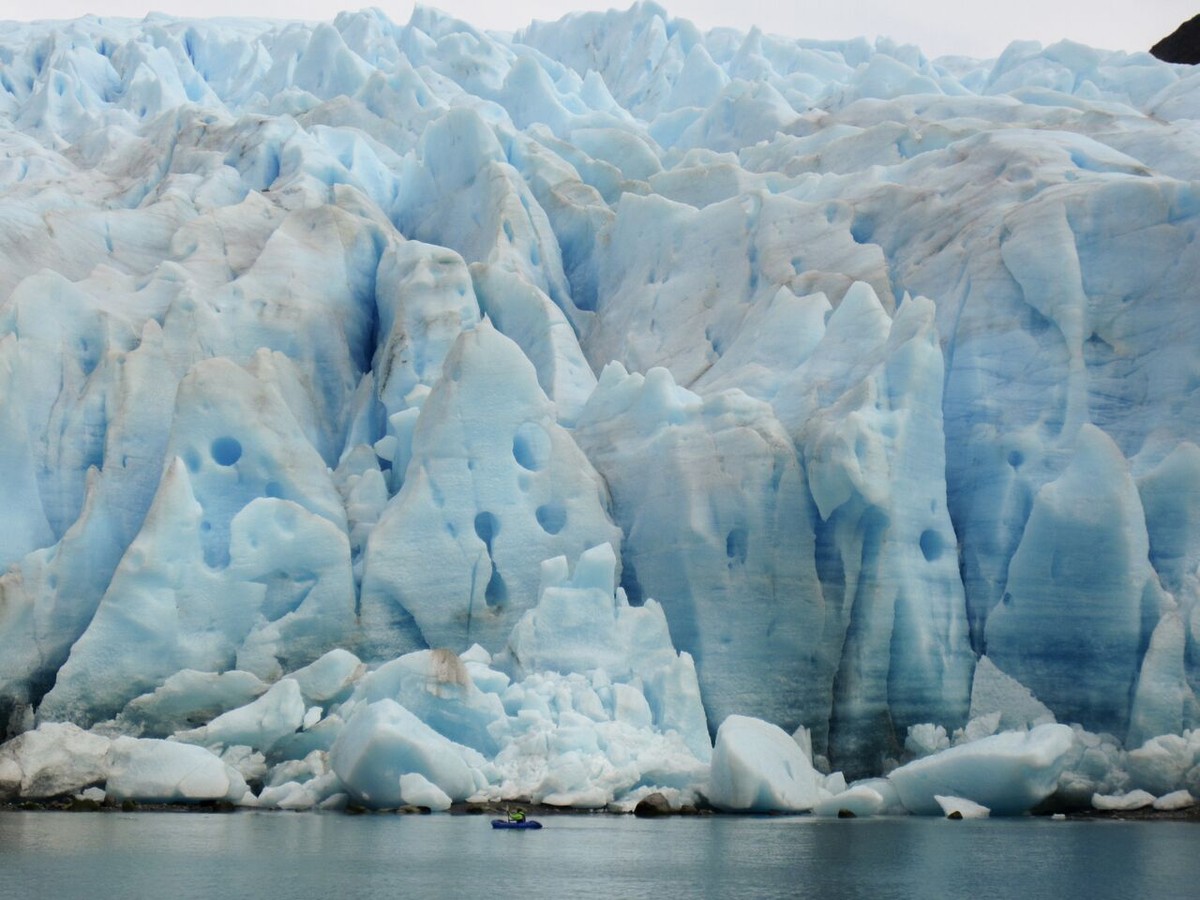 Izagirre, measuring the water depth (bathymetry) near the facade of the Fouque glacier, with the packraft. It is important to know the depth of the water to understand if the glaciers that reach the water increase or decrease. Ed. Incognita Patagonia 2016

The glaciers had the largest surface in large glaciations. Since then they have gone back and the current glaciers are remnants of those great periods of ice. The Earth has suffered numerous successive glaciations and the Tierra del Fuego has been covered with ice for thousands or millions of years. During the expedition, three researchers wanted to analyze the evolution of glaciers in the southernmost area of Tierra del Fuego. 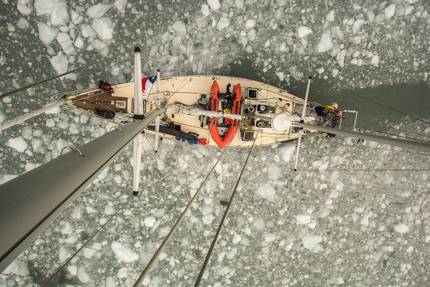 The Northanger sailboat has been in charge of guiding and monitoring the ice maze. As they entered the ice zone on foot, the three glaciologists never knew when the sailboat would return to look for them, since often due to the harsh weather conditions it could not sail. Ed. Incognita Patagonia 2016

“200 years ago, in the period called the Little Ice Age, the ice advanced again. XIV. and XVII/XVIII. in the nineteenth century and in Patagonia It lasted until the twentieth century. The atmospheric temperature around the world dropped about one degree and the glaciers advanced,” said Izagirre. “That’s the global delay we’re seeing today, how glaciers are retreating from their expansion into the Little Ice Age.”

Studies using satellite images indicated that the glaciers of Patagonia had not varied in recent years, with moderate loss rates. Izagirre, Rico and Miles decided to analyze it firsthand. “In our fieldwork we have seen the opposite: in the last 70 years 20% of the total area of glaciers has been lost. Especially in recent decades. And, moreover, we have seen a kind of separation in glaciers, a kind of disconnection from the point of accumulation of snow, to the place of the current language. Normally the snow falls, accumulates up and then, when it reaches a certain density, deforms with force of gravity and slides down. Now glaciers are not able to make their movement from top to bottom, there is a kind of disconnection. In the previous decades it arrived very well to sea level, healthy, but now it is sinking in the heights of glaciers”. 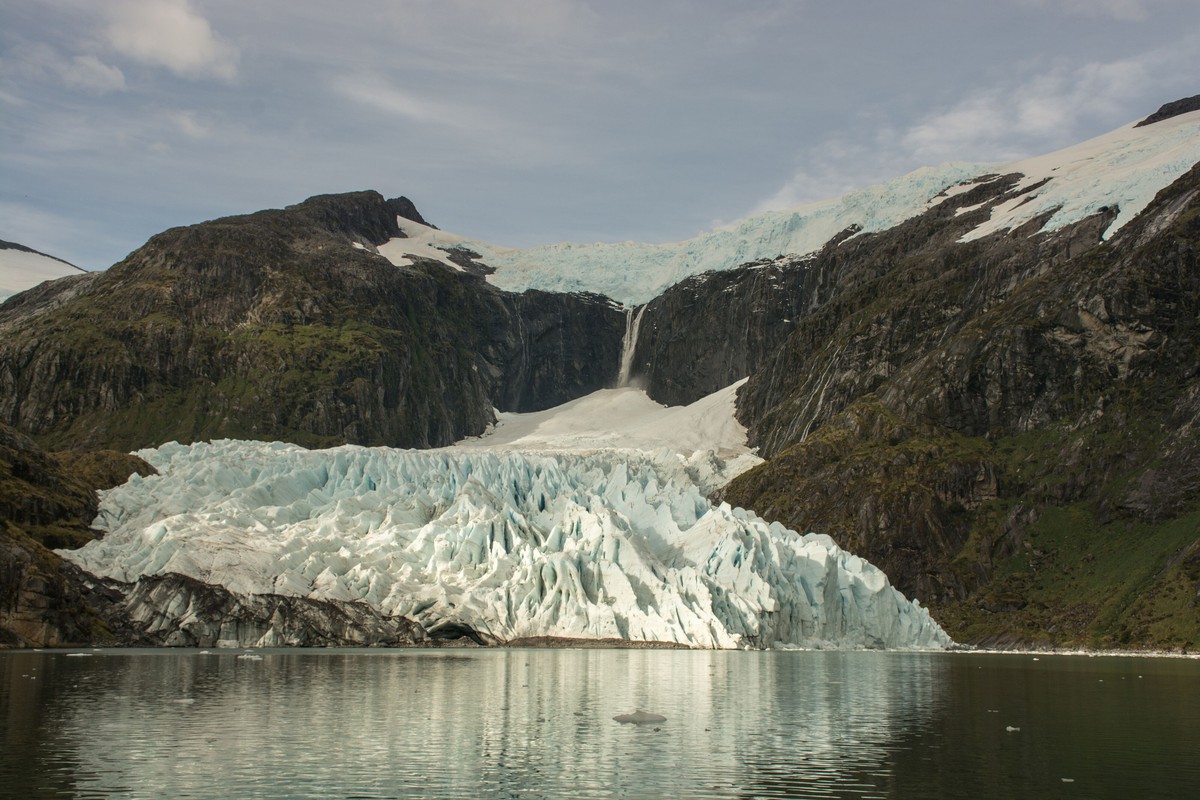 one of the glaciers located on the eastern arm of the Acix fjord. The disconnection between the upper part and the lower part is evident in this glacier, sign of the current unhealthy. At this time, the glacier tongue is fed only by falling snow falls and ice cubes.

We must take into account the health of glaciers, which when melting rise the sea level. Antarctica or Greenland have more ice by nature, but smaller mountain glaciers are the fastest reacting to temperature changes and raise sea level much faster. Those from Patagonia and Alaska, for example. They could increase between 1 and 1.5 meters according to researchers.

The retreat of the ice has brought with it new landscapes in the Land of Fire. New valleys have been discovered. In addition, all the space covered by ice is inorganic, lifeless and inert. “Now little by little life begins. As glaciers recede, those that grow first are lichens and mosses. It is a landscape of great beauty. Spectacular.”

“On the other hand, Patagonia is characterized by a climate so humid and cold that it generates peatlands. The vegetation that grows in such a humid and cold climate is not able to dismantle and then the deposits begin, both lateral and vertically. The creation of peatlands takes a long time, so its existence shows that glaciers retreated quite a while ago.”

In Izagirre's opinion, the influence of beavers is also noticeable, since to market their skin they were introduced in Ushuaia in 1946. “They have a great influence on the ecosystem. They found a totally turbulent area, with marshy waters, ideal for them. In addition, there are no big predators there.” Therefore, the expeditionaries have tried to locate the main nests of the beavers. 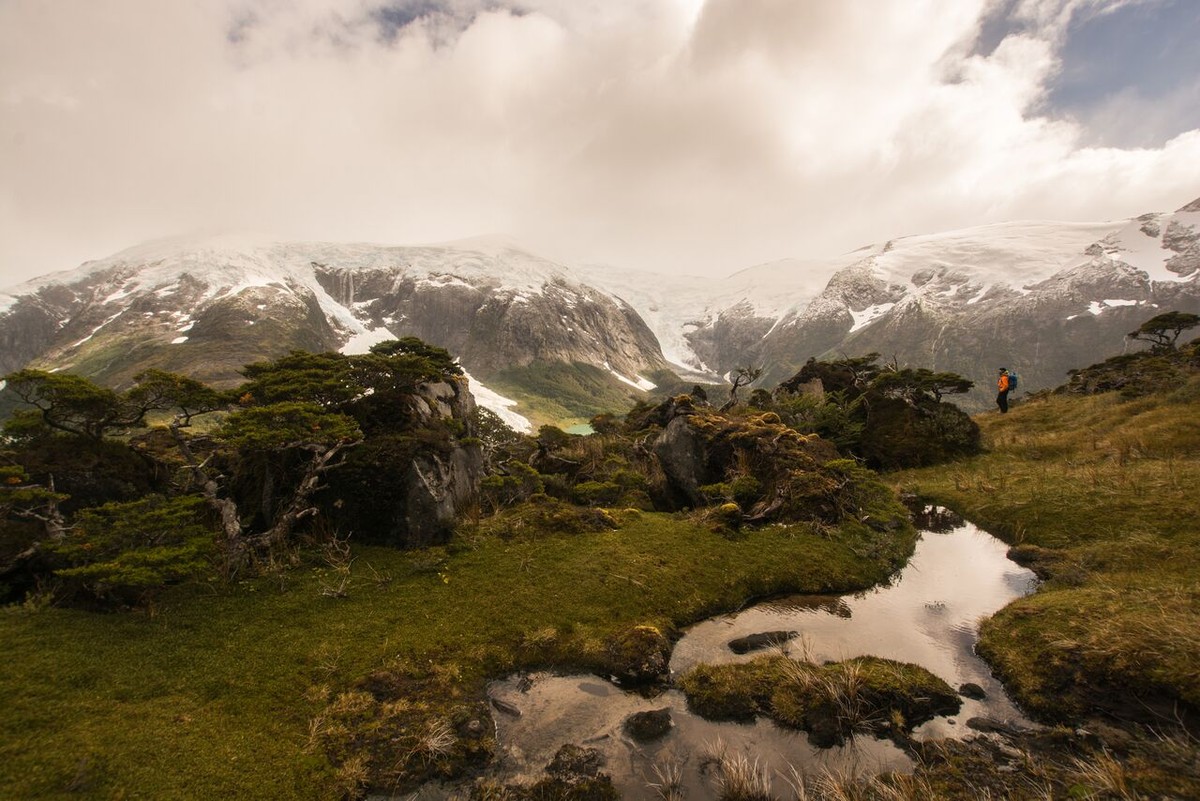 The vegetation of the Tierra del Fuego and the peatlands create beautiful landscapes in areas of retreat of the ice. Ed. Incognita Patagonia 2016