Neil Armstrong: "It is a small step for man..., a leap for humanity"

Astronaut Neil Armstrong was the first man to step on the Moon. On 16 July 1969, along with two other co-workers, he began his journey after a long period of waiting.

Neil Armstrong was born on aout 5, 1930 in Wapakoneta (Ohio), United States. We had a quick and different student; before going to school I already knew how to read. Unlike all his companions, the young man from Ohio, far from wanting to drive cars, dreamed from a young age of driving big planes. The first class of driving of this great vehicle was made with 13 years and with 16 got the driving license. In 1947, at Purdue University, Indiana, he began his studies in aeronautics, but three years later, as soon as the Korean war broke out, he left the books and entered the U.S. Navy as a professional pilot. In that war he participated in 78 missions.

After the end of the Korean war and working in other positions, NASA chose it for the first landing on the Moon. Thanks to the Apollo 11 spacecraft, Chief Commander Armstrong, accompanied by astronauts Collins and Aldrin, was able to land on the Moon in 1969.

On July 16, 1969, Neil Armstrong and his two companions had breakfast together. At 6:30 in the morning, thanks to a special lift, they boarded the Apollo spacecraft. The three astronauts sat on their own chairs and waited for the signal from the control center staff. Those minutes became endless, especially to Bull Aldrin, who was totally frightened.

“Go ahead! The time has come to take off,” Armstrong told his two collaborators. After 60 seconds of turning on the spacecraft engines, they reached the speed of sound. Neil Armstrong suddenly raised his heart to 110 beats per minute.

The real trip to the Moon began at 12:22 with the start of the third floor engine. 24 hours later, on July 17, the three astronauts were awakened by Houston control center personnel. From that moment on, problems begin to appear one after another. Among them, the Soviets informed Armstrong that the Moon 15 probe had been sent to the Moon. In those moments of the Cold War it could be a worrying news, but thanks to a call from the Americans to the Soviets, the three pilots were informed of the trajectory of the probe.

After spending the next quiet day, on July 19, as they approached the Moon, tension began to rise among the pilots. After the day, at dawn on July 20, the emergency alarm 1.202 was fired on the boat. From the Houston control center they were repeated over and over again that they had the alarm controlled, although they did not know what the problem was. In order to reassure the drivers, he invited them to continue the Apollo 11 mission with a high “GO”. Despite these reassuring words, Armstrong was very concerned about the fear that his last heartbeat would feel at the time. 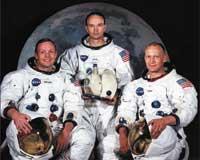 If that alarm was not enough for the pilot to start vibrating, being 1.5 km from the Moon, suddenly the alarm 1.201 jumped. That too, according to the Houston workers, although not worrying, Armstrong became very nervous and did not know where to illuminate. There were 50 m, 20 m... 10 m., 2 m, 1 meter... they sat down! News Everything seemed in place and both alarms were silenced.

At 22:00 pm the astronauts received permission to get off the boat. 50 minutes later he left the ship Armstrong, went down to 9 stopovers and said the famous phrase: “It is a small step for man… a huge leap for humanity”.

At 22:54, from Earth, you could see the images of the video camera that Armstrong carried over. The astronaut Ohio said that he felt very calm and agile on the Moon, weighing only 25 kg. He began to study the soil of the Moon and declared that it was made up of dust. His companions at the control center removed some stones or rocks so that at full speed the return to Earth would be prepared. Even though the Moon's floor was covered with dust, it was very hard and Armstrong could not fill the Earth's sack.

At 23:15 at night, after meeting with Aldrin and being 2 hours and 40 minutes admiring the landscapes of the Moon, they entered the spacecraft and headed towards the house. The return went smoothly and the Apollo 11 mission was accepted by NASA staff. 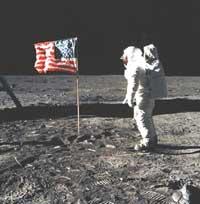 Neil Armstrong, after working for the NASA organization, in August 1971 presented his resignation as professor of aeronautical engineering. For eight years he worked as a professor at the University of Cincinnati.

The American astronaut has received numerous medals and appointments in his professional career. After his return from the Moon, 17 villages have offered him various titles.

Aeronautics has always generated a great passion for Neil Amrstrong and in his life the tasks he has performed in this field have been surprising. However, some have cancelled their trip to the Moon in 1969. According to the latter, the American flag on the Moon by Armstrong could not move, since on the Moon there would be no wind movement. However, this denial has never been demonstrated and Neil Armstrong remains the first man to walk the Moon.