Recently, biological insecticides have been used. Among them stand out the microbiological pheromones and insecticides. The main advantage of these substances is that they have no toxic effects on other living things.

Sometimes millions of butterflies are collected with great damage in the fields of cultivation.

The damage caused by insects is important, especially in the agricultural sector. So far, chemical insecticides have been used to reduce these arthropods. Despite the fact that these chemical substances perfectly meet their objective, most insects die on the one hand and on the other cause troubling problems: the toxicity for the other animal and man is evident and for this we only have to remember the DDT. Today, fortunately, this chemical is prohibited in many villages, but other chemical insecticides are still used.

Among these ecological or clean insecticides are microbiological pheromones and insecticides.

Before explaining the first, we will give a general concept of pheromones, natural products, chemical signals used by members of the same animal species. For example, bees found in a heavily fed area secrete pheromones to attract the rest of the bees.

They can be extended through water. For example, fresh water fish release alarm pheromones when they are injured, which will cause the escape of the rest of fish. 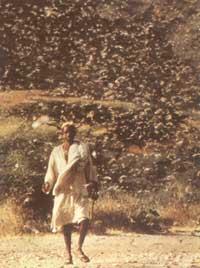 The control of lobster is a serious problem today, despite the use of chemical insecticides. Pheromone can have a response in the future.

As for sexual pheromones, animals creatively segregate the reproductive behavior of males and females in heat. One of the most outstanding examples is that of some species of orchids. These flowers are very similar to bees and wasps. In addition, bees and wasps secrete chemical molecules similar to the sexual attractive substances released. Consequently, the males of these insects tend to the flowers and in this activity the males practice pollination. Sexual pheromones include gupsola, bonbykola and oxodecienoic acid. The use of similar synthetic pheromones allows to control populations of different insects to protect crops. Scientists have managed to attract certain species of insects using synthetic pheromones.

To do this, after spraying these substances in the fields of cultivation, insects approach the origin points as sexual hormones secreted by insects of the other sex. There the pheromone concentration is the highest and some containers are found. These containers are traps filled with chemical insecticides, so we end up with the species (and only that) that affects crops, without unbalancing the rest of species and ecosystem.

This anti-pest technique has begun to apply in Valencia with apparently positive results.

Biologists have carried out a thorough investigation on the route of dispersion of the pheromone and the flight of the male sits. If, according to this, it emerges under a forest at a pheromone point, the non-straight path will be followed. This is demonstrated by the small balloons full of helium released.

These researchers have carried out another experiment with a kind of pasture (Lymantria dispar) and the results have shown that these insects follow the pheromone up to 80 meters. Always freeing Feromona in the same direction is more important than his direct path so that the Sits can find a pheromone source. 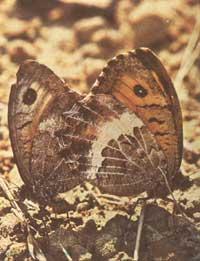 Pheromones get that males and females are not collected for fertilisation.

Meanwhile, at the University of Kyoto in Japan, they have worked with cockroaches using synthetic pheromones such as periplanon B. The activity of this substance was biologically tested in six species of the genera Periplaneta and Blatta, and the activity in the males of the American Periplaneta was very high and very low in the oriental P. japonica, P. brunnea and Blatta.

The attraction of the synthetic periplanone B was studied in houses of different locations. After placing this product in traps it was observed that it attracted most of the cockroaches of the genus Periplaneta.

When we speak of biological insecticides, we cannot speak of precocenos or of William S. Omit the American entomologist Bowers.

Bowers is responsible in 1976 for the isolation of the first juvenile antihormone and for the investigation of its insecticide properties. She resorted to plants when she began to look for these compounds. Its reasons are: We turn to plants, to the search for sources of many substances of biological and medical importance. Insects and plants have undergone a coevolution at least of the lower carboniferous, and it is known that many of the plant's chemical compounds limit trends toward insect plants... On the other hand, interactions between insects and plants are known and documented.

Bowers modified the method used until then for the extraction of plants. Most of the vegetable extractions previously carried out in search of insecticides were carried out using polar solvents (water and alcohol), while the tests of the extracts obtained were applied to the adult specimens and the influence of the insecticide was seen in the mortality rate in the interval of 28-40 hours. Bowers modified the procedure. On the one hand, it did not perform extractions with polars of this solvent, but rather used a mixture of acetone/etiléter for the extraction of not very polar substances from the plants. Second, it did not use adult specimens as object of study, but immature specimens. On the other hand, instead of studying the mortality rate, he studied the metamorphosis of insects and their subsequent development.

After several attempts, the Ageratum houstonuanum plant caused early metamorphosis and an extract that prevented the development of the ovary. This extract consisted of two substances already known and synthesized: Prekozene 1 and Prekozene 2 substances.

Its structure is as follows:

The biological influence of prekozenos is divided into four areas:

Early metamorphosis: the origin of early metamorphosis has been the biological influence of prekocenes that has historically been first known. When the prekocenes were thrown into the males of a butterfly type (Oncopetus fasciatus en), miniature adult specimens were obtained. The same thing happened when treating the eggs.

Antigonadotropic effect: Although all preterm insects have their ovaries well formed, they remain unused during their short life. Proof that the Corpus Alatum of its insects does not work, so to understand the influence of prekocenes it will have to resort to its study, as we will see later. On the other hand, proof of this is the absence of ovarian development after prekocene treatment of normal adult insects.

Creation of the diapausa: The dependence of juvenile hormone diapause on adult coleoptera is known. When colourful potato beetles have been sprayed with prekocene, many of them (75%) have left plants, dug into the pavement and constructed small rooms of diapausas. After 4 months of observation none of them has emerged.

Obicide effect: The eggs of some insects, such as the beetle of peas in Mexico or the butterfly, die sprayed with prekocenes. Death seems to occur in the last stages of embryogenesis, since, on the one hand, most of the eggs studied contain developed embryos and, on the other, the appearance of larvae or nymphs causes their immediate death. 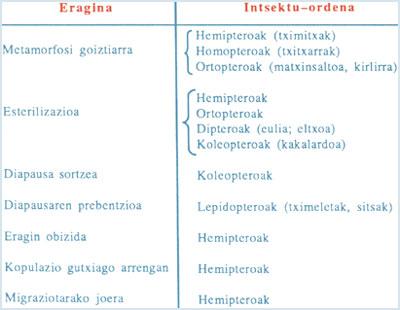 As for the way of working of the prekocenes, let's say briefly that the proteins of the cells undergo alkylation and that in this way the proteins are denatured, with the consequent death of the cells.

As a consequence of all the above, the use of prekocenes for insect control is placed in all its biological effects. The induction of early metamorphosis does not only shorten the duration of the immature steps of life. It reduces food and reduces crop deterioration. On the other hand, although all preterm males obtain insemination of common females, all premature females are sterile. Successful copulation between females and preterm males is rare.

On the other hand, in adult specimens, prekocenes have influence. Adult females are sterilized and in some species create a deadly diapause.

Insect eggs are not released by prekocenes and die.

Therefore, prekozenos attack insects throughout their lives and may be suitable for the control of insects.

On the other hand, we have insecticides of microbiological origin: The bacterium Bacillus thuringiensis causes a paralyzing disease on the banks of most lepidoptera. This handicap is due to the ingestion of vegetables that carry spores of the bacteria. Each sporulating cell of Bacillus thuringiensis releases a protein crystal with a regular bipyramidal shape around the spore, along with the spore formed by celylam autolysis.

This crystal is formed by a toxic protein for insects. After ingestion it dissolves in the alkaline liserine juice of the caterpillar. This means the softening of the intestinal wall and the diffusion of intestinal fluids for blood and hemolysis. This causes rapid paralysis. B. B. Since the parasitic protein of Thuringiensis is toxic to the wide range of lepidoptera larvae (but not to vertebrates), episodes of sporulating cells of this microorganism are very useful in agriculture as biological insecticides.

As has been said, the crystal transforms the intestinal content into blood or hemolinfas of the insect without obstacles. As a result, the blood becomes completely alkaline, since the pH change implies a complete invalidation of the larva. Death occurs much later and is a consequence of the bacterial invasion in the tissues of the larva body.

Protein crystals show a high degree of toxicity for the larvae of many lepidoptera, but they are not toxic to other animals (including all vertebrates) and plants. They are, therefore, suitable agents to control many insect pests that damage the crops of the plants.

For all this, scientists have developed a new microbiological industry: an industry for the high production of toxic protein. Then he gets into dispersing agents and thus can protect the harvests of the baserritarras from the damage produced by the caterpillars. In the industries this protein is not chemically isolated. Instead, the bacilli that produce crystals are grown in abundance. Once sporulation is produced in parallel to the production of the glass, they are collected, dried and introduced in dispersing dust.

The insecticide effect of viruses has also been investigated. In the experiments of some Dutch scientists, the nuclear polyhedrosis virus has caused great damage to the larvae of the parasite to Spodoptera.

People's concern about traditional insecticides is growing, as damage to the environment and our health is evident and growing. Therefore, effective microbiological methods for insect control are being developed. Viruses, fungi, and even many bacteria are being evaluated as insecticide agents. The environment and health will thank us. 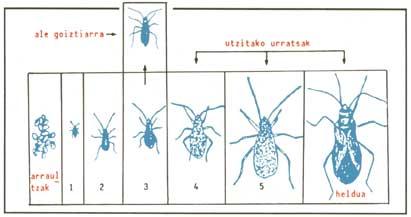 Dysdercus cingulatus cingulatus
Early metamorphosis of the insect. The second step of the Nymph gives the third step that seems to be who gives an early grain.