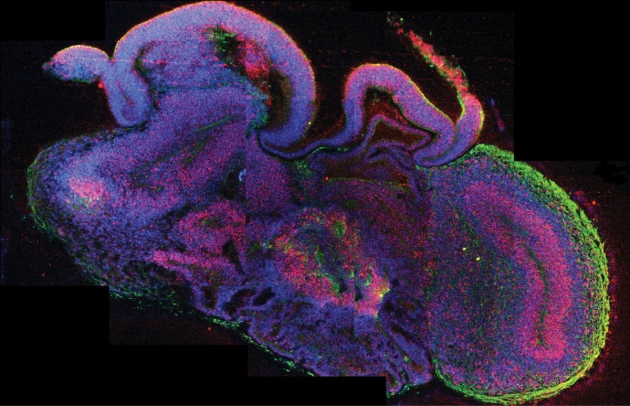 Based on human stem cells, researchers at the Salk Institute (USA) have managed to create and maintain functional structures similar to small brains (organoids). It is difficult to keep organoids alive in vitro, as demonstrated five years ago when for the first time human cancer occurred, so they have been transplanted in mice to develop vascularization and obtain nutrients and oxygen. Success of the experiment: For 14 days the organoids had already developed a complex network of blood vessels and their neurons created connections with the brain of mice.

In total they have survived 233 days. Organoids have been differentiating and maturing during all these months. At death, the cellular structure and maturity of the human brain belonged to a newborn.

It is the first time that human organoid brains integrate into another species and has also brought ethical concerns: will the intelligence of mice change? Moreover, can human consciousness be applied to other animals? Many questions and few answers, for now. In the transplant performed at the Salk Institute, mice have not demonstrated any special capacity, as published in the journal Nature Biotechnology. It is not clear what would happen if instead of adult mice it had been transplanted into newborn mice.

Despite doubts, the development of human organoid brains in the mouse can greatly facilitate brain modeling and the study of diseases. It can even facilitate in the future the transplantation of healthy human neurons in the brain of people with neuronal damage.