Much has been written and studied about obesity in recent decades. What once constituted an evolutionary advantage (energy storage capacity when food was rich) has become a primary health problem in today's sedentary and supercharged society. In fact, the main risk of obesity is that it can cause health problems related to it, such as liver steatosis, diabetes, certain types of cancer or cardiovascular disease. The scientific community is immersed in the search for definitive treatment against obesity, but there are researchers who have proposed: “What if it were possible to be obese and healthy?” 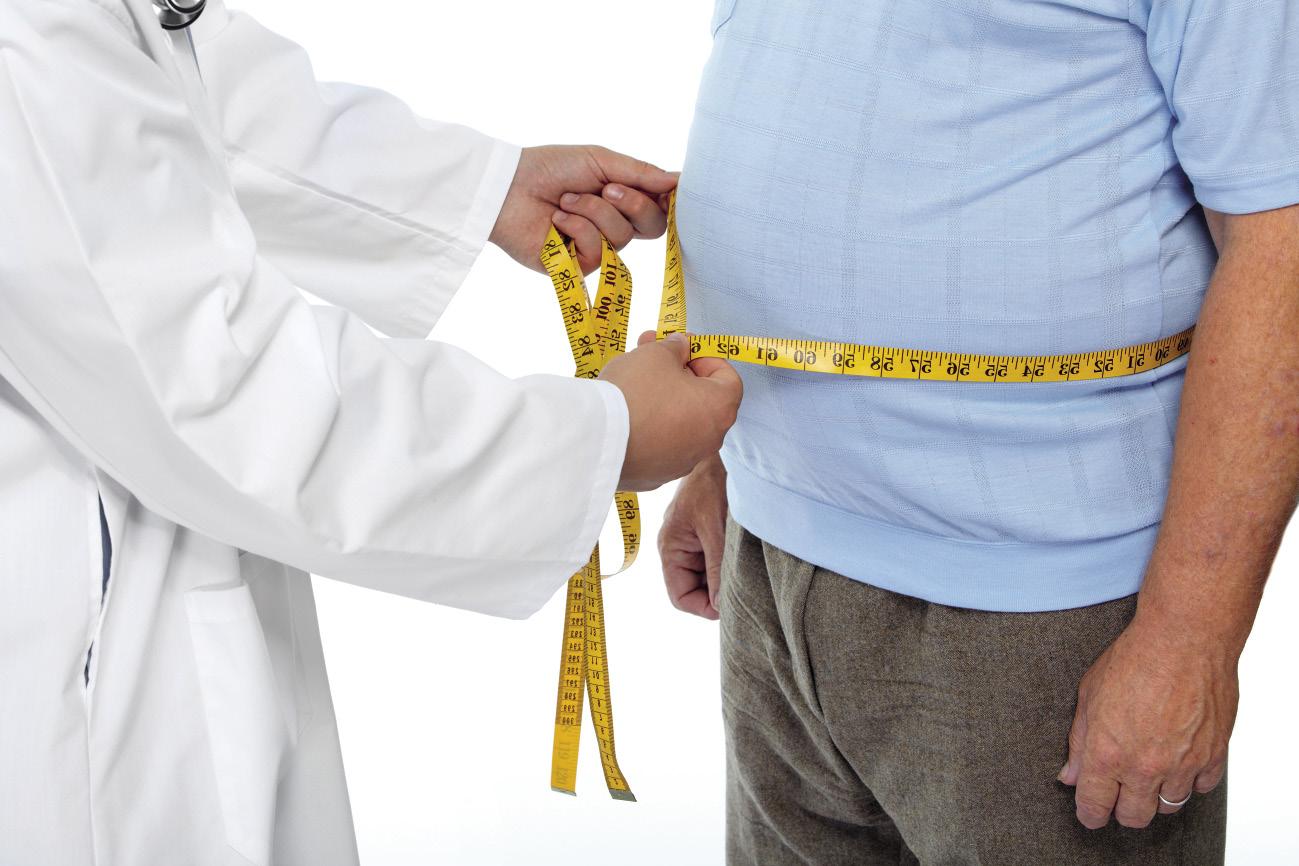 But let's start with the beginning. Obesity is a chronic disease characterized by an excessive accumulation of fat that can be harmful to health. Despite being a multifactorial disease, eating habits and environmental factors are considered as main factors (sedentary lifestyle and excessive energy intake) [1]. The development of obesity requires an imbalance between consumption and energy expenditure, which extends over time. This excess energy accumulates in the functional units of adipose tissue, adipocytes, in the form of triglycerides, through two mechanisms: the hypertrophy of adipocytes (increase in the size of adipocytes to accumulate energy surpluses) and the hyperplasia of adipocytes (increase in the number of adipocytes). Although the role of adipocytes in the accumulation of energy has long been known, we have only become aware of the importance of these adipose tissue cells in maintaining the metabolic homeostasis of the body [2].

In general, the hypertrophy capacity of adipocytes is related to obesity that develops in adulthood, while hyperplasia has been considered as the driving mechanism for childhood and juvenile obesity. In fact, until recently it was thought that the number of adipocytes in a fatty tissue was limited and kept constant from childhood to maturity [3]. However, in recent studies with rodents it has been observed that in adulthood also new addivenites occur when abusing energy. These new adipocytes arise from the differentiation of immature adipocytes and participate in the diffusion of adipose tissue (hyperplasia) [4]. But, in spite of this, what does the hypertrophy and hyperplasia of adipocytes have to do with health?

Well great. When adipocyte hypertrophy occurs, adipocytes grow in size until they touch each other. In this situation, the diffusion of oxygen is also obstructed and adipocytes suffer a state of hypoxia [5]. On the other hand, these addivenites in which hypertrophies are found are also added inflammatory macrophages. Thus, adipose tissue secretes inflammatory cytokines to the blood, such as interleukins 6 and 8 (IL-6 and IL-8), monocyte protein 1 (MCP1) and tumor necrosis factor (TNF) [6]. All these processes will result in a chronic low level inflammation that will cause alterations in the normal functioning of adipocytes (Figure 1). On the one hand, the baseline lipolysis of adipocytes (mobilization of reserve fats) is intensified and more free fatty acids are released into the blood. These free fatty acids will accumulate in organs and tissues other than adipose tissue, in the form of triglycerides, mainly in liver and muscles, producing what is called lipotoxicity. Some studies have shown that higher levels of free fatty acids are associated with the development of insulin resistance and hepatic steatosis (excessive accumulation of fat in the liver) [7]. Moreover, the production of inflammatory agents of the citoquine mentioned above will prevent adipogenesis. Consequently, the differentiation of immature adipocytes will be more limited and fewer new adipocytes will be generated [8]. All these facts will lead us to the context that is explained at the beginning of this paragraph, entering a vicious circle, apparently without solution.

In case of hyperplasia of adipocytes, energy surpluses will accumulate in new adivenites, decreasing the presence of hypertrophied adivenites. Consequently, the flow of inflammatory cytokines will also decrease [5]. Moreover, the formation of smaller adipocytes has been linked to angiogenesis (the formation of new blood vessels), which will prevent adipocyte hypoxia and associated adipose tissue inflammation [9]. In this sense, it has been observed that mice genetically affected by indefinite fat percentage adipogenesis are metabolically healthy when fed fattening diets. In humans something similar has been found.

In fact, adipocyte fat percentages in people with metabolic syndrome present an infiltration of hypertrophy, hypoxia and macrophages; and, on the other hand, in the adipose tissue of obese and metabolically healthy people, smaller adipocytes and greater number of blood vessels have been described (Figure 2) [2]. Therefore, a solution to the problem may be to cause adipogenesis in obese people. In this way, these people would develop fewer adipocytes and, consequently, they would have a lower risk of metabolic diseases. 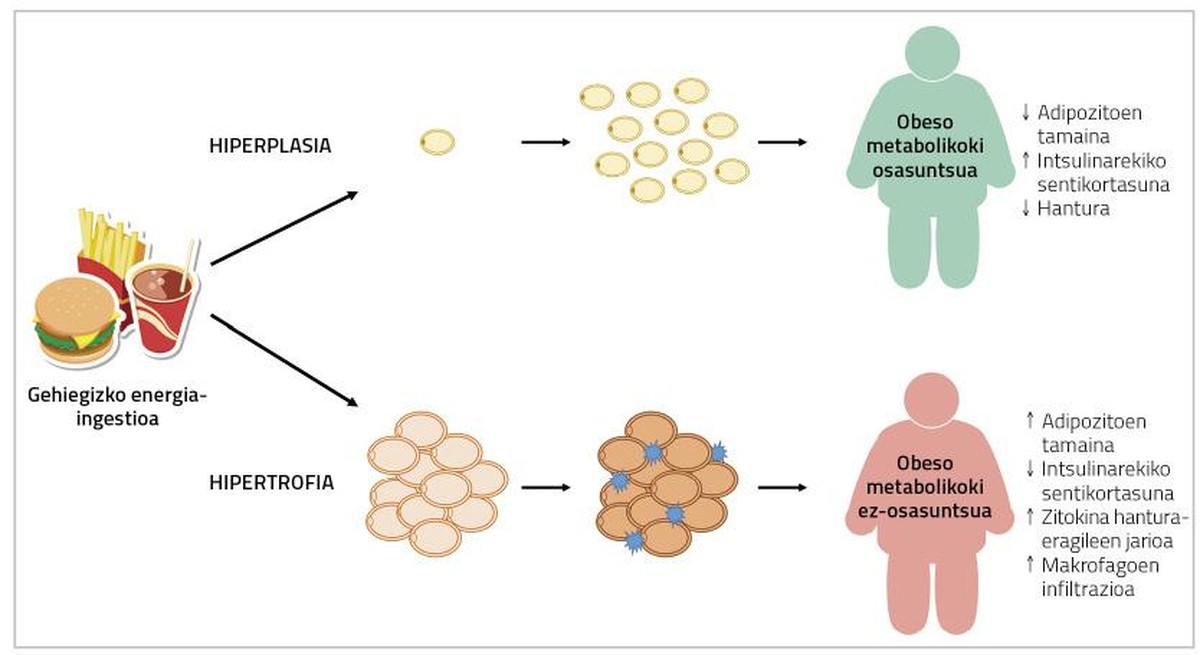 Unfortunately, it is not so simple. In fact, according to the fatty tissue, the adipocytes that can be found in it are different. For example, visceral fatty tissue increases by hypertrophy, while subcutaneous adipose tissue tends to hyperplasia. In addition, the capacity of fat deposits for adipogenesis differs from stimuli that induce it [2]. Studies conducted with rodents have shown that activation of genetically induced adipogenesis causes the development of smaller adipocytes in transgenic strains (without affecting body fat content or weight) and that they become metabolically healthier [7]. In the case of humans, despite not having done this type of work, something similar has been described with the drug thiazolidinedione (DGT) used for the treatment of type 2 diabetes. This is because, in addition to improving diabetes, it produces an increase in adipose tissue, a decrease in the size of local adipocytes and a decrease in the flow of inflammatory agents of cytokines. Unlike animals, the metabolic improvement produced by these drugs coincides with the increase in body weight [10]. However, it remains to be seen whether it is possible to produce adipogenesis in adult humans without harmful effects on body weight or other metabolic processes. In this context it should be noted that many studies carried out to date on adipogenesis have been aimed at inhibiting adipogenesis itself. In fact, by testing molecules and compounds that may be suitable for treating obesity, it studies their ability to inhibit adipogenesis. And the truth is that this makes sense: if fewer addivenites occur, it will make it difficult to spread fatty tissue (and therefore obesity).

As can be seen, there is still a long way to go to achieve effective pharmacological treatment of obesity. Although the concept of obese is apparently attractive (and reasonable), metabolically healthy, there is no absolute consensus among researchers on the health consequences of this situation. Understanding the development of anatomically different fatty tissues can help modify the distribution of body fat or the functioning of adipose tissue in obese people. However, it is still clear that prevention is the most effective intervention against obesity.