Computer development and artificial intelligence II. It began around the World War by the hand of Alan Turingen and others. However, one hundred years earlier, Charles Babbage and Ada Lovelace placed the first stones of computers, programming and artificial intelligence. Babbage designed an analytical machine that could be considered as the precedent of computers and Lovelace foresaw what this machine could do beyond mathematical calculations. It is undisputed that they did a surprising job and had a wonderful forecast. And it is noteworthy the achievement of Lovelace, taking into account the situation of women of the time. 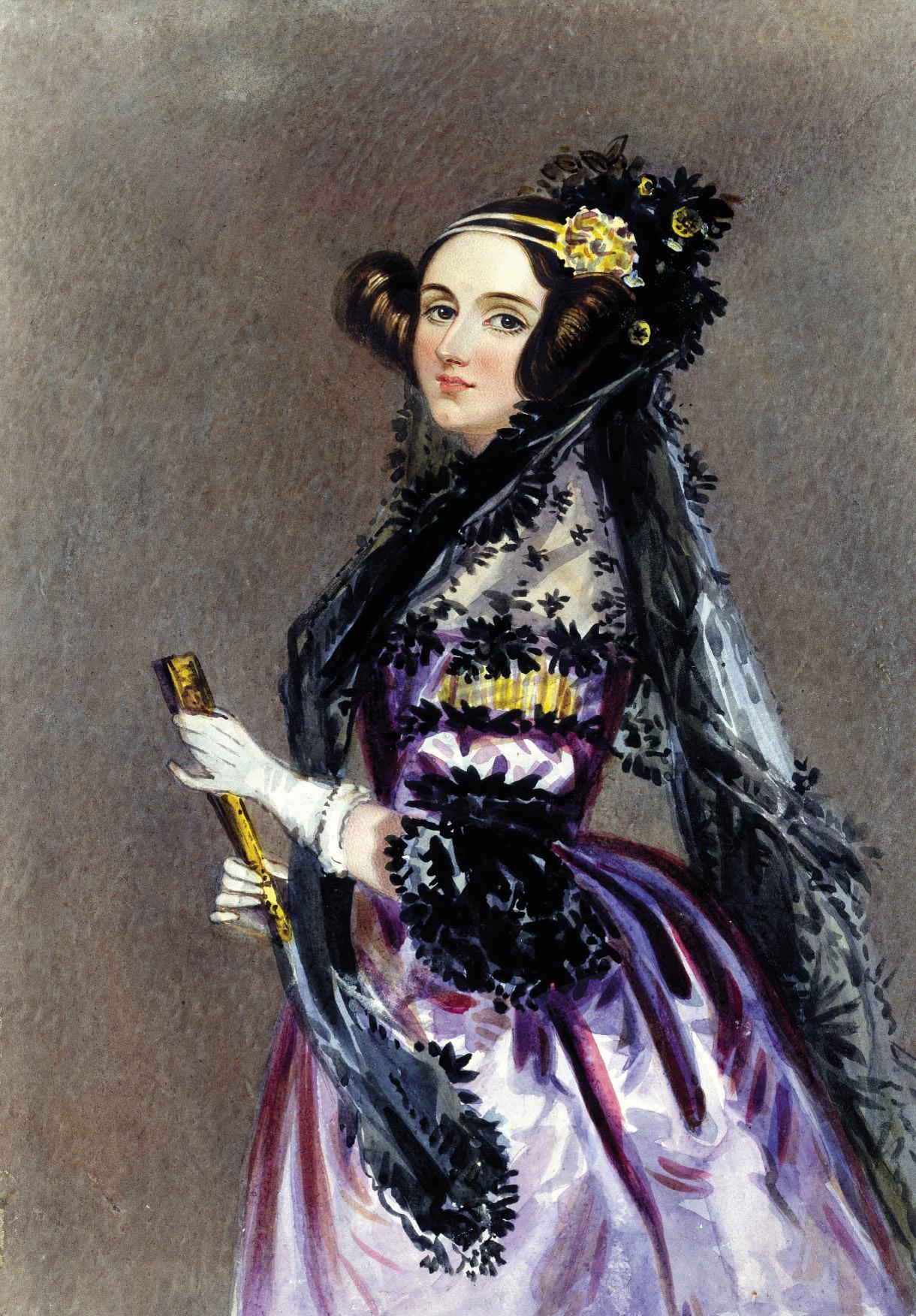 Ada Lovelace was born in 1815 and his life was marked by the nature and situation of his parents. Daughter of the prestigious poet Lord Byron and Annabella Milbanke, Augusta Ada Byron. A few months after his birth, his parents separated. In fact, Annabella learned of incestuous relationships (including an illegitimate daughter) and other homosexual relationships that Lord Byron maintained with his stepbrother Augusta Leigh. In contrast to the laws and customs of that time, the mother was in charge of Ada, with the threat of making known the reason for the separation.

Ada never met his father, who lived in exile until he died eight years later. His mother did not allow him to see or read photos or works of his father until he was 21. And in the hope that the rebellious and immoral attitude of his father could carry her in the genes, he removed Ada from the world of the arts and letters of his father and guided his education to the world of science and mathematics.

At the age of 20, Ada married William King, who later became Count of Lovelace, being from then on the countess of Ada Lovelace. He had three children, but Ada Lovelace's footsteps were guided by scientific curiosities, restlessness and the estrangement of family and social life usual for the aristocratic of that time. And, above all, he has gone down in history for his work with the mathematician Charles Babbage.

Charles Babbage and the analytical machine

Charles Babbage was a mathematician, engineer, inventor and philosopher born in 1791. Despite its multiple facets, its most significant inventions were the differential machine and the analytical machine.

In the society of then mathematical tables were used in many fields: logarithms, trigonometric... His calculation was an arduous task with errors. To solve it, Babbage thought calculations could be done with mechanical components. And so he invented it, in 1822, the differential machine, a mechanical steam machine that calculated the functions of polynomial. The construction was complex and costly, and despite several attempts at financing and machine construction, it did not. It was built by the London Science Museum in 1991 and worked perfectly.

He also invented a more complex machine capable of performing any calculations: the analytical machine. I could make several simple calculations and combine them as we wanted following a “program” (a perforated card). It had a logical arithmetic unit, jump control structure and loop under conditions, memory... For all this, the analytical machine of Babbage is the first machine that meets the concept of universal machine of Turing (current computer). 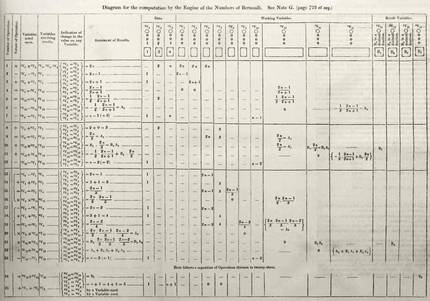 Program written by Lovelace for the calculation of Bernouilli numbers with analytical machine.

Lovelace met Babbage and his machines at the age of 18. He soon understood that the analytical machine had enormous capacities. He began to engage with Babbager at a professional level and extended for many years.

In 1840, Charles Babbage was invited to honor at a congress held in Turin by the most prestigious scientists of Italy. Count Luigi Menabrea wrote an article summarizing what was stated by Babbage, who later became the Italian Prime Minister. Some scientific editors considered the publication in Great Britain interesting and thought to ask for the translation to Lovelace. Lovelace, before returning, wanted to make contributions to the article. It took a year and its observations and contributions were three times longer than the article. These notes reflect Lovelace's greatest achievements.

On the one hand, Lovelac wrote the algorithm for calculating Bernouilli numbers using analytical machine: what operations were to be performed, in what order, on what variables, ties, jumps under conditions... All this can be considered as a program for a computer. For this reason, Lovelace has been considered the first programmer in history. Later other programs written previously by Babbage have been found, but less complex or less clear than that of Lovelace.

On the other hand, Lovelace discovered that the analytical machine could be applied beyond mathematics to treat any kind of information. This is what current computers do. Lovelace was the first person to see that computers could be for that, prophet of our digital age.

Finally, Lovelace pointed out that Babbage's analytical machine would never be able to surprise the man with surprise, that is, to do things that are programmed. In short, he said that machines would not be able to think that artificial intelligence is impossible. Alan Turing, in his famous article on artificial intelligence that proposed the famous Turing test, expressly rejected Lovelace's words. There are those who say that the Turing test (if in an interview you cannot differentiate a machine from a human being who says it can be an intelligent machine) is not suitable to know if it is an intelligent machine, but proposes the Lovelace test (consider a smart machine if it is able to show creativity and surprise man). In any case, it is clear that the debate on artificial intelligence was launched by Lovelace.

Lovelace died at the age of 37. His works did not have sufficient reception or were quite unknown. Babagg and Lovelac did not manage to launch their machines and programs and launch the computer revolution, perhaps because with the degree of sophistication of the engineering of that time it was impossible. It took a hundred more years to do so. But fortunately they have known their works later and have received the recognition they deserved. Proof of this is the name put in the 1980s to the programming language developed by the US Department of Defense: Ada.