In the previous issue we discussed the introduction of 3D screens on mobile devices. To continue with the three dimensions, this time we want to mention another related technology: 3D printers. These devices capable of building pieces from drawings will be seen more and more often in the coming years; moreover, the copyright problems that can arise with them will give more importance than in the world of culture.
3D printers
01/09/2011 | Leturia Azkarate, Igor | Computer scientist and researcher

Euskalterm defines the printer as: "Computer output peripheral that displays paper information by typing alphanumeric characters or images." If we associate with this definition, the term “3D printer” does not seem very precise, since it does not print on paper. On the contrary, it is better associated with the definitions provided by the Encyclopedic Dictionary of Science and Technology or Wikipedia, respectively, which define as "Peripheral that produces the contents of the files on a physical medium" and "A peripheral output that fulfills the function of passing an image or text document on a computer to a physical medium (usually paper)". In fact, a 3D printer, based on a three-dimensional digital modelling of an object (product of a CAD program or a Blender 3D modelling program or a 3D scanner), creates a physical object.

The truth is that the definition of the printer does not have to coincide with 3D printers, which do not pass the digital model to the physical world "printing", that is, leaving its footprint on another support, but producing a new object, so the 3D printer is not in itself a printer, but a machine to produce.

How do they work?

There are 3D printers that use different technologies, but basically all of them make flat pieces that would be obtained if we cut an object into horizontal sheets, mounted and added on each other. The difference is in the methods they use to build and add parts. Some use a lamination system (they cut flat pieces previously created giving a concrete shape and then add them), others make them by injecting a liquid plastic that cools and hardens in contact with the air, others overlay layers of plastic powder, hardening only the profile that is needed with a liquid or a laser...

That, of course, is to simplify a lot, the technology is complex and has many details. For example, how to build hanging parts if we go from bottom up? Or how to hold a stubby top with a thin profile if the material is soft? For all of them there are different solutions. Depending on the technology used, there are numerous combinations of characteristics, quality, size, speed and resolution.

But little by little, as with any technology, few of them are imposing themselves and making the leap from the world of research to the market. And they are currently on sale 3D printers that can do really amazing things: They can have a resolution of 0.1 mm vertically, like normal printers in the XY plane, being able to make very complex parts such as clocks and flashlights. ), and also in color…

For its price and size it is still not possible for anyone to have it at home (the cheapest 12.000 ? As for their values and up to 60,000 euros, as for their size, for the moment they are logs of a certain size, but in some sectors they are very useful and increasingly visible: industrial manufacturing (rapid prototyping of parts), medicine (prosthesis to measure), etc. On the other hand, there are some photocopying and/or screen printing shops that offer part building service with 3D printers.

However, as with any new technology, it is normal that size and price drop and expand more and more. In addition, there are projects for the creation of free 3D printers (those that put all specifications and / or plans with free distribution licenses so that anyone can take their own for about 300 euros). And one of them, RepRap, also aims at self-replication, that is, the ability to build copies of itself. At the moment, version 2.0 of this device is only capable of manufacturing its plastic components, but when it is able to make circuits and metal parts, at some point (and project members expect it to be so in the not so distant future), they can spread exponentially.

Autoreplicable machines? If we mix this concept with artificial intelligence, which is also increasingly advanced, we glimpse apocalyptic images like the "replicants" of Terminator or Stargate... Well, this is not very likely to happen, but it will bring revolution if 3D printers expand.

Having one of these characteristics is having a factory at home, capable of producing many things (at least certain sizes and materials), with a digital model or a plane of them. And digital models, unlike physical ones, are easily spread over the Internet. In addition, the development of digital models is becoming easier, using 3D modeling software, CAD software, a 3D scanner or, why not, a kinect (as we tell you two numbers). Seeing the phenomenon of distribution that has occurred with music, film and digital book, he thinks what can happen in a panorama that would allow him to do so in the world of physical objects... Many manufacturers can run out of the after-sales services business as long as the spare parts can be done by ourselves. Or the sale of models and figurines of merchandising of films. And the same with many other businesses...

Probably the production industry acts in the same way that the cultural industry has reacted previously, that is, it will try to stop it in some way. To some extent, this phenomenon has already begun to occur and there have been complaints about sharing plans of objects of industrial property. The productive industry will not find it easy to curb this trend, but it is more powerful and larger than the cultural industry. However, soon 3D printers will be a big change. 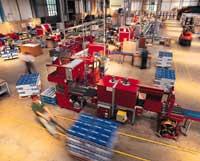