Natural spaces in the surroundings of Zumaia

The territory of our coast is a territory with great ecological potential, since the last natural spaces that we have left indicate this. The coastal areas are very attractive and comfortable, so they have colonized immediately, destroying in most cases completely humans. However, there are still some unique places, whose witness is the surroundings of Zumaia. 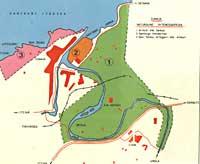 As indicated in the following map, the environment of Zumaia appears divided into three zones:

Depending on the distribution made and by order, we will try to point out the most interesting singularities of these areas.

The Urola River, in its eagerness to reach speed in the final course, forms beautiful meanders that daily alter its physiognomy due to the sea. Since ancient times, numerous boats have crossed its salty and bright waters. Through trade and shipbuilding, many years ago there were many people in this area. Later, the man, despising the mud and marshes of the banks of the river, undertook a padding that, sometimes, did not know for what it acted (being embarrassed in some areas) forming land like the desert. However, despite the aggression of this area, it maintains its ecological aspect and remains very suitable for ecological recovery. But ghosts always appear and destroy more than can be recovered, making them unrecoverable.

It is time to put into practice what our political leaders say, because our territory is in great need and the environment of Bedua is a clear example. 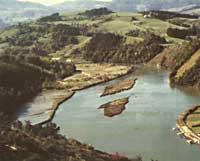 In this interesting natural space, ecological riches are very different. We can distinguish two botanical groups: 1. Forests located on the slopes of the rivers, dominated by the Cantabrian holm oak. Year after year their situation is deteriorating, eliminating the lateral pine forests that receive large beatings. Conservation measures should be taken. New plantations should also be made with this species ( Quercus ilex subspilex). We must also take into account that there are areas where there are empty slopes and that erosion can be high, so it would be very beneficial to make plantations. 2. The vegetation present in river courses and islets is also specific and important in these places. There are very interesting species like the Glaux maritima.

But undoubtedly the most important wealth in this area is that of birds. To define it in a nutshell, in 1967 in the magazine Munibe A. In the dossier “Estudio de la avifauna de Guipúzcoa”, written by Noval, he said literally: “San Miguel de Artadi (Zumaya), a true paradise of birds, crossed in Spring and Autumn by the currents of migrants”. It is true that the biotope has been degraded, destroying the native forests. Therefore, one can understand the disappearance of the nesting birds mentioned in the area of Artadi, such as the sparrow and the tortola.

However, as Noval pointed out, the passage of birds above Zumaia is very evident, so in these long trips, the marshes, silts, banks, bushes and forests of the Urola area are ideal places to rest.

Another important feature of Bedua is that it is an ideal place to spend the winter. Therefore, the number of seabirds is very high, especially that of the reidora gull (89-XII-7, 400 specimens), but other species are also observed, among which are the shadowy gull, the argenic gull, the cormorants, the pineapple gull... and other species of waterfowl such as the lilies. Thus, castanets, bells, kurlints and chorlitos are common visitors in bird walks, where small groups winter.

The analogs are usually quite scarce, appearing occasionally only some (common goose, txistulari goose, basahate goose, common pig, duck spoon...). There are also different groups of herons: a royal heron (9-XII-89, 12 units). It seems that it has located quite well in Bedua to spend the winter, highlighting its silhouette in the surrounding arts. The small herons also winter in this area (90-I-3, a couple). This species can be expanding on our coasts and the Bedua can be an ideal place to spend the winter.

There are many other references in this area, but for its interest we highlight the following: 1.- Carried out on July 12, 1989. In the heart of Bedua we saw the common amiltxori, which immediately (as usual) was hidden in the abbey. It may come from the colonies in the Atturri area. 2.- The other is the kingfisher, once quite common. We still have the opportunity to see in Bedua his song and flight. Despite having seen it on July 4, 1989, we have not confirmed whether it is nesting or not.

Royal heron. Small egret. The different herons also use the area of Bedua to winter.

Although it seems most normal to preserve and improve this wonderful place, it does not happen. Surprisingly, according to a 1981 study (J. Elosegi and A. Bea) San Miguel de Artadi, if proposed as a protected area, does not refer to this area through the presentation by the Provincial Council of Gipuzkoa of the report of High Value Zones. It may have its “reasons”, but it is suspicious that during the drafting of these lines there will be important changes in the area of Bedua. Therefore, when the above-mentioned desert padding was beginning to disguise a little, from one day to another, it has again deserted by destroying all vegetation. No matter what seagulls, herons, etc. The machine will continue.

We did not want to end without giving the last look to Bedua. The loss of historical echoes and ecological values that come from it would be a great pain. Your environment should be protected and recovered. With small changes it can be a very didactic place. It is also ideal for breaks and excursions. The previous orientative map, in green, painted, does not mean that the entire area should be subject to specific protection, but, through the integral protection of certain areas and the differentiated qualification of its surroundings (rural, ecological and landscape), maintaining in many cases what has at present, its location within this interesting natural space. For example, the designation of refuge for hunting. We do not believe that minimalist critics must be used. Protecting only the islands of Bedua would be a dip. The proposal remains there.

Perhaps more than one has been formed in the Zumaia area by the proposed protection of two of the 3 mapped areas. We at least not (gulls, herons, kingfisher, encinar, this naturalist,... at least not). However, the particularities of these areas will be mentioned in the following specimens, if they allow.