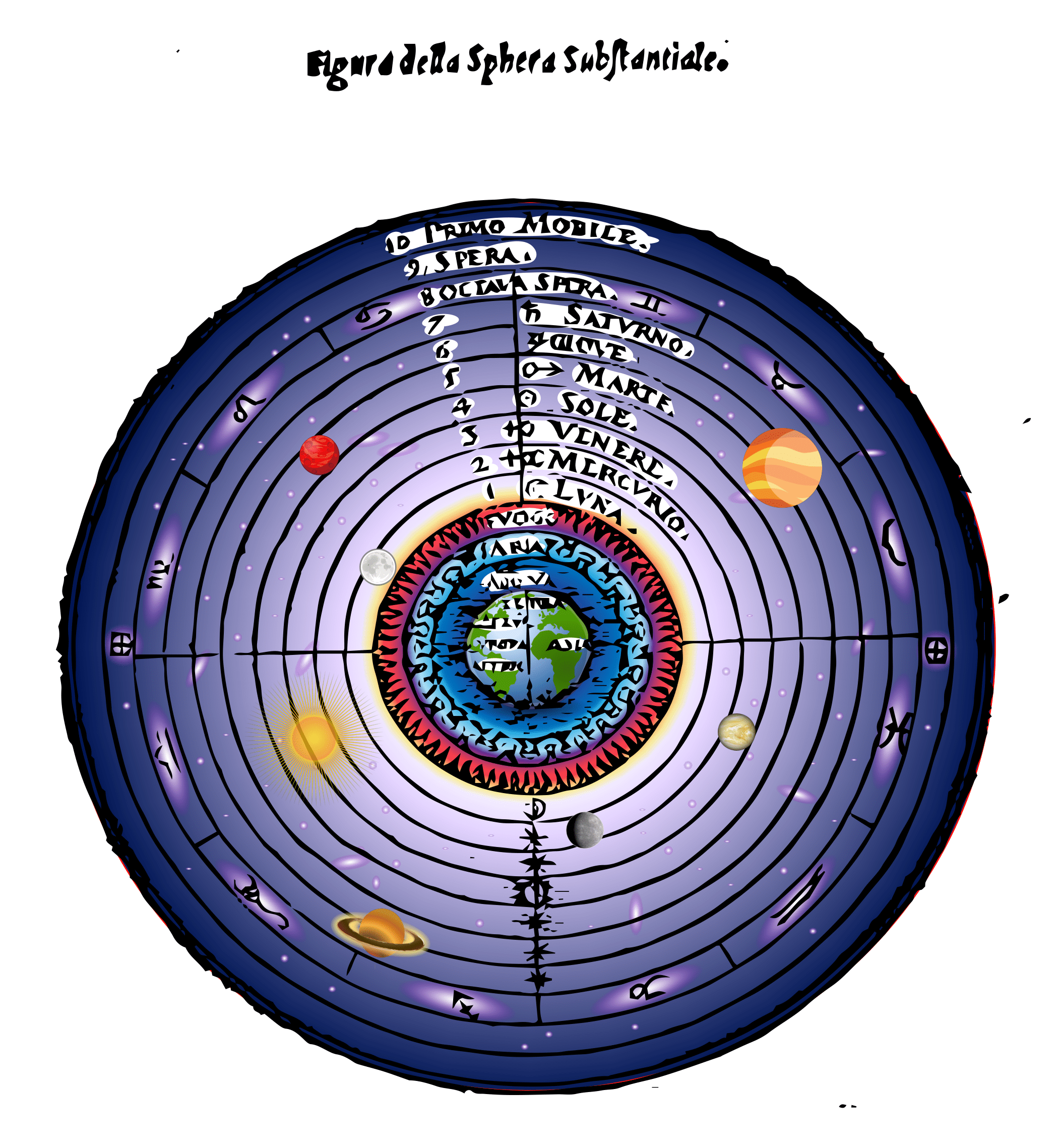 [Representation of the geocentric model of Aristotle]. Ed. Marques Hijazo, A./ CC-BY-SA-4.0.

“Research in science is to see what everyone sees thinking what nobody has thought.” This is said to be a definition by the physiologist Albert Szent-Györgyi who fits perfectly with the trajectory of leading scientists such as Copernicus, Galileo, Newton or Einstein.

We've been taught what the universe is, we've done work on the solar system and we've come to internalize the trajectories and movements of the Earth. We've been told what gravitational force is, and some of you might get to understand Einstein's theory, at least enough to understand most of the movie Interstellar.

This is all true, or at least we do. In the Koranic era, however, the truth was quite different. So they were convinced that the Earth was the center of the universe and that the Sun, for example, was spinning around them. Why not? They also saw the sun move every day from east to west.

For years, this idea of geocentric theory was considered true, until someone questioned it. Astronomer Nicolas Copernicus is credited with the heliocentric theory that the Earth spins around the Sun, thus turning the truth upwards [1]. And it's no wonder, think about what it should be like to know that the principles that have been taken for granted so far are not the right ones.

Behind all this is someone who has developed a different thought and who, in view of what everyone sees, thinks what nobody has thought, is the definition of the physiologist Albert Szent-Györgyi.

The heliocentric theory undoubtedly changed the perception of the human being about the place of the universe, but not only that, but it also directly influenced the Aristotelian approach that was approved for many years to explain the fall of objects.

We all know that if an object is released at some height it falls to the ground and today we say gravity is responsible. But it was the Greek philosopher Aristotle who first explained this phenomenon. He had the Earth as the center of the universe and protected the Moon, the Sun, and the other planets and stars as they revolved around it (see figure above). According to him, each element of the universe had a position, its tendency was always to return to basic positions and heavier objects made this journey faster [2]. That is, the stone falls to the ground because it is its natural position and the heavier the stone falls faster. However, heliocentric theory showed that the basis of this explanation was not correct, so the idea that was considered true over the years was nullified.

Galileo Galilei was followed by the famous astronomer, physicist, philosopher and mathematician, studying falling objects. Galilei’s work, together with astronomer Johannes Kepler, was very important in establishing heliocentric theory, so he was aware of the challenges this new theory poses. In order to study the fall of objects, Galileo conducted very precise scientific experiments and, contrary to what Aristotle said, concluded that the objects released at the same time land together, regardless of their mass. It also confirmed a steady acceleration in the fall [3].

Ideas which, as we have said, did not correspond to the explanation put forward by Aristotle. Galileo left many unanswered questions, for example, he did not explain why the Earth spins around the Sun. However, he made interesting contributions to the following researchers and in the history of science, once again, he questioned what until then was considered true.

Isaac Newton was the physicist who collected the ideas until then and enunciated the Law of Universal Gravitation. The story of the apple that fell to Newton is well known, which made him think about the strength of gravity [2]. We don’t know whether it really happened or not, but it’s true that at some point Newton asked “Why would this object have fallen to the ground?” Driven by curiosity, knowledge and probably imagination, Isaac Newton is one of the best known scientists in history. According to his theory, the two material particles interact with each other through a force proportional to the product of their masses and inversely proportional to the square of their distance. This theory coincides with the one experimentally observed by Galileo and explains that the Earth is the one that spins around the Sun.

It looks like we have a solid theory that explains what's going on around us, but if history has taught us anything, it's always something to improve. And yes, Newton's theory had some shortcomings. It worked very well on Earth and pretty well in the solar system, but out of there it looked like the universe didn't follow Newton's laws. So what? So, Albert Einstein.

Yes, it was the physicist Albert Einstein who, enunciating the General Theory of Relativity, remedied the shortcomings of Newton's Universal Gravitation, by giving an explanation to the phenomena taking place in the Universe.

We would need a large number of characters and a great ability to explain Einstein's theory well, so we won't get into it for now. But once again, Einstein also saw what we all see, but thinking about what nobody had ever thought.

Let us therefore leave, from time to time, outside those ideas which we consider to be true. Let us question what they have taught us and ask ourselves why what is happening in our environment? Let's think differently, which is the path that, as history shows, has taken us to the truth of today. And who knows, maybe you're the next science revolutionary that's mentioned alongside those big names.

[1] Montor, L. “The paradoxes of circles: a classic foundation in the heliocentric theory of Nicolás Copernicus”, Academia, 2019.