Chillida in Bilbao: signs of the atmosphere on the skin

Several sculptures by Chillida decorate the streets of Bilbao. One of them is at the Guggenheim Museum Bilbao: Hug XI. Recently, the conservatives of the museum have modified their conservation plan, since its appearance did not evolve as planned. In a study conducted in collaboration with UPV researchers, it has been clarified why this extraordinary evolution has occurred and the necessary measures have been taken. In short, the impact is due to the atmosphere of Bilbao. 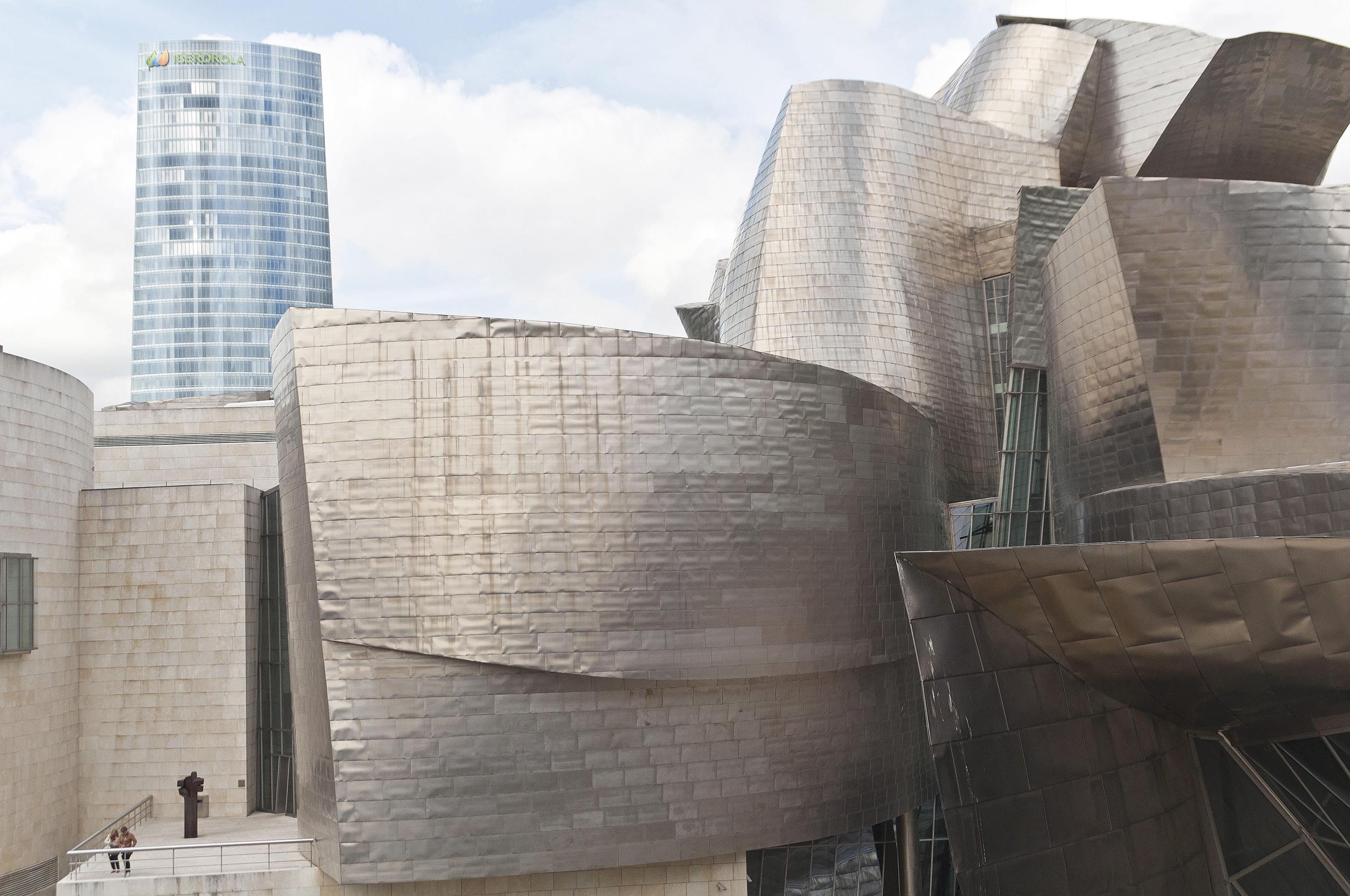 Irregular bark, pieces of material raised, color that should not be... A series of stainless steel sculptures made by Eduardo Chillida in Bilbao suffer a series of unexpected alterations. As a steel specifically designed to survive in street conditions, "it is not the expected characteristics", explains Ainhoa Sanz, curator of the Guggenheim Museum Bilbao. He emphasizes, however, that they are not "worrying" because they are very superficial and on a very small scale. "However, it is important to know its origin in order to take measures to protect the sculptures as much as possible," he added.

Stainless steel (also known as Corten commercial name) is formed by the ability to form a protective layer suitable for external conditions. It develops a layer of surface corrosion that acts as a barrier against stress agents in external conditions. Therefore, much is used for the creation of external structures such as facades, bridges and railways. And many artists have long been using it to be out in the sculptures, including Chillida.

With the aim of knowing the state of stainless steel sculptures, their agents, possible solutions, etc., a study was launched in collaboration with researchers from the Analytical Chemistry department of the UPV/EHU and the curators of the Guggenheim Museum Bilbao. In addition to the sculpture Abrazo XI of the Museum, they had permission to study other sculptures of Chillida in Bilbao: Begirari IV, Praise of Iron III and Seeking Light IV. "When they were in different areas of the city, they had different pollution centers, which allowed us to carry out a comparative study," explains Julene Aramendia, a researcher in the Analytical Chemistry department at UPV. 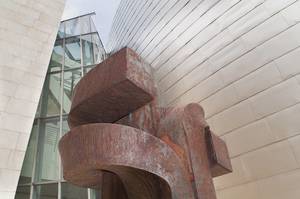 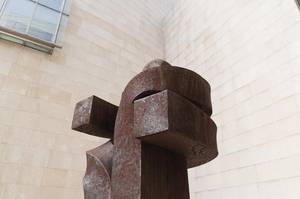 Ed. Oihane Lakar/Elhuyar Zientzia
Since the opening of the Guggenheim Museum Bilbao, this work has been part of the museum's collection since 1997. The description of the sculpture in the museum is as follows: This steel structure is a vertical and at the same time sinuous element. The steel parts are twisted and transformed as plants that grow from the soil and are framed in them by embracing". Along with other sculptures, Besarkada XI reflects "the close relationship between Chillida's works and nature. Outdoors, under variable light, these works reveal the shade of their curves and their perimeter".
Begirari IV 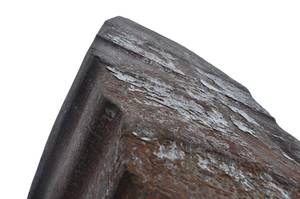 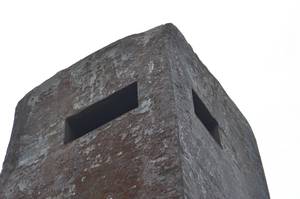 Ed. Oihane Lakar/Elhuyar Zientzia
This sculpture, founded in 1997, was placed in 2003 in its current location, in the Parque de la Ribera, at the beginning of the passage of Pedro Arrupe, opposite the University of Deusto. As a lighthouse to the spy, it is a work of vertical art, like a totem. The steel structure is extending as it ascends. At the top opens a cavity that gives the gift of the eye of a gigantic Polyphemus.

The protective layer is formed in contact with oxygen and water. It is formed by several iron oxyhydroxides and its formation requires wet and drying cycles. These compounds are transformed progressively and offer increasing protection. Aramendia explains the process that usually occurs: "In the early stages it appears lepidocrociated on the entire surface of the sculpture. It is an iron oxyhydrooxide, very unstable, very chemically active, which reacts continuously and changes with the agents of the environment. Little by little, by effect of wet and dried, the lepidocrociite is transformed into goetite. Goetite is a much more stable, more passive compound. More passive it makes of barrier and does not let pass the pollution. Therefore, the actual protective effect occurs when it appears exhausted."

However, the material does not respond equally in all atmospheres and in certain conditions does not create the expected protection. "This is what we have seen, besides in Embrace XI, in the sculpture Begirari IV of Chillida. Instead, Praise of Iron III and Seeking Light IV are in good condition, with a homogeneous surface and a suitable color," said the researcher.

This atypical behavior is because "we saw that there are abundant particles in the atmosphere of Bilbao, especially rich in silicates, such as natural dust or some particles of car smoke - explains Aramendi-. In addition, being close to the sea, salt particles are added to the previous ones", he adds.

The researchers used non-invasive research techniques to "cause as little damage as possible to the sculptures," according to Aramendia. The techniques of spectroscopy and fluorescence allowed to know the molecular structure of the surface of the sculptures, that is, the compounds that compose it and the basic structure, that is, the chemical elements that appear in the surface, both qualitatively and semiquantitatively (in what proportion each of them is found). 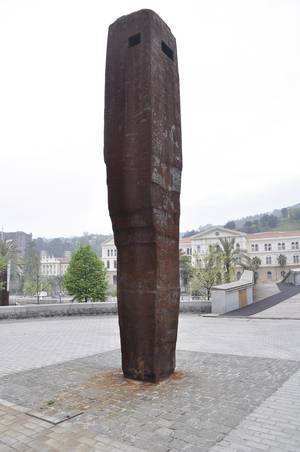 Like Embrace XI, the sculpture Begirari IV was not removed from its black layer when it left the foundry. As the typical oxidation layer of stainless steel is generated, the black layer has been rising. Much of the material that falls corresponds to the black layer. When falling leaves an intense red color. Ed. Oihane Lakar/Elhuyar Zientzia

In the results of these analyses it was observed that the sculptures in worse situation presented a high concentration of lepidocrocytes and a low concentration of goetite, while those that were in better situation presented a situation to the inverse. In other words, "the process of transforming the lepidocrociite into goetite is interrupted in the sculptures that were in worse condition", that is to say, the composition of particles rich in silicates, that otherwise do not affect in any way the steel: it does not erode, it does not deteriorate or anything", says Aramendia.

The abundance of lime in the lands of the Basque Country has provoked, in addition, the presence of plaster in the atmosphere and, therefore, the fall of small pieces of material when posing the plaster on the surface of the sculptures. Plaster can appear in three levels of hydration (plaster, hemidate and nidrite) and each has a given volume. Therefore, when changing from one to the other, the volume also changes, which causes physical stress on the skin and, therefore, detachment of fragments of material.

If the influence of atmospheric particles was minimal, Aramendia observed in the studies carried out that "the composition of the steel used for the realization of sculptures has a capital importance in its conservation". "We didn't delve into it too much because it's a complete research topic, but we've seen that the sculpture that was in better conservation status, Praise of Iron III, is made of steel from another alloy." Instead of corten steel, Elogio del Hierro III (the same one used by Chillida to make the San Sebastian Wind Comb) is made of steel called Reco, which "responds very well to the atmosphere of Bilbao", explains Aramendia.

The sculpture Elogio del Hierro III is one of the sculptures that is best preserved among all the studied. Color uniform and without irregularities in the skin. Ed. Oihane Lakar/Elhuyar Zientzia

The response to atmospheric pollutants is found in the quantitative differences of the compounds of Corten and Reco steel alloys. In general, and above all, "we can say that the sculptures with low copper content in the alloy have been preserved worse, and that the high concentration of nickel lasts better in the atmosphere of Bilbao," he added.

Ainhoa Sanz of the Guggenheim Museum Bilbao, for his part, explains the treatment given to stainless steel to promote the creation of a protective layer of corrosion: "When it leaves the ironwork it comes out with a black layer. To facilitate the oxidation process and homogenously clean with sand to remove this black layer. Well, Chillida did not want to do so in the sculpture we have in the museum. This has increased the irregularity of the skin".

Well, in Embrace XI and Begirari IV all harmful factors have been added: Both are located near the Bilbao estuary, the bridge that passes next to the Guggenheim Museum has a lot of traffic, so there is a lot of pollution in the cars and are two of the sculptures that Chillida did not want to clean with sand.

From the results and conclusions of the study carried out, "we have learned a lot and brought it daily, adapting the maintenance to Besarkada XI. Periodically we irrigate the sculpture to remove the contaminants that have remained on the surface, dust and salt. In this way, in addition to cleaning them, we provide the drying cycles necessary to form the protective layer. So watering we get double effect," explains Sanz.

In addition to these waterings, no other measures have been taken in the museum regarding the conservation of the sculpture of Chillida, since "it is not necessary. University students have seen strange things happening in the skin, but it is not serious, and we are sure that the sculpture has no danger of deterioration," says Sanz.

It has continued: "If at some point we observed this risk, the first measure would be to introduce sculpture into the warehouse to protect it from the polluting atmosphere. Then, we would study in depth the intervention we could do to restore the sculpture, and knowing this, we would have to speak with Chillida's family to obtain the necessary permission. Before performing any intervention, it is necessary to know what the artist wants, what he wanted to express conceptually. And both interests need not match." 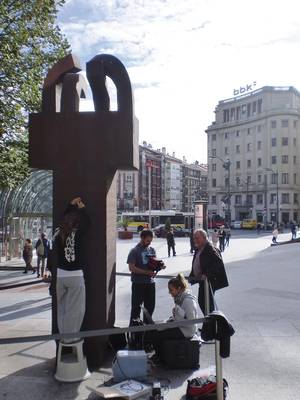 Ed. Laboratory Ibea, UPV
"Bilbao owes much to iron and I too... This sculpture pays tribute to the history of iron in this city. Part of the Earth, it transforms and ascends." These are the words of Eduardo Chillida in the act of placing this sculpture in the Circular Square of Bilbao. He carried out the work between 1990 and 1991 at the request of the bank BBV.
Seeking Light IV 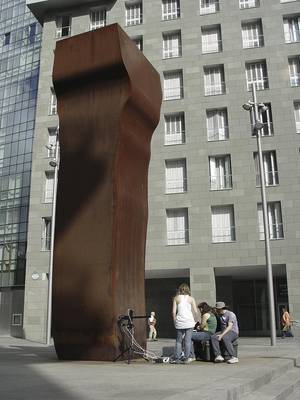 Ed. Laboratory Ibea, UPV
The square between the Isozaki towers was the last location of this sculpture until June 2013. Then they took auction and paid the most money paid for a work of art by Chillida: 4.806.209 euros. In 2001, Chillida created an 8-metre long sculpture of 16 tons.
Luis Chillida, son of Eduardo Chillida, explained how the architect Arata Isozaki and his father chose the location of this sculpture: "Between the two saw that this location would be suitable for a sculpture called Seeking the Light and ascending. Here, the paternal sculpture arises between two large and surprising housing buildings: it extends as it ascends in search of the light that gives it its name".