The use of polyphenols, a good strategy against obesity?

Overweight and obesity is the excess fat in our body. According to data from the World Health Organization (WHO), in 2016 more than 52% of adults were overweight or obese, as well as 340 million children and adolescents between 5 and 19 years old. In fact, obesity has tripled from 1975 to the present day, although in this sudden increase there are many factors that influence the food pattern and the daily physical exercise (jobs, ways to move from cities or towns, which we perform in free time, etc.) has been created by the changes that have occurred.

Probably the most successful strategy against obesity is to incorporate a healthy, long-term food pattern, which generally includes fruits and vegetables, whole legumes and cereals, avoiding ultra-processed foods and excessive sugars and saturated fats. The Mediterranean diet, which meets the aforementioned characteristics and is very close, is a food pattern related to the prevention of numerous diseases thanks to the nutrients and bioactive compounds of the food it prefers. Among the latter are phenolic compounds (called polyphenols), the substances that produce plants to combat stress, so in many foods of vegetable origin they are found naturally, such as fruits, vegetables, nuts, tea or olive oil. These phenolic compounds have aroused in recent years a great interest due to their bioactive characteristics that can be useful in the prevention or treatment of diseases such as cardiovascular diseases, certain types of cancer, liver alterations or diabetes. In addition to the aforementioned diseases, it has been proven that they can contribute to the prevention and treatment of overweight and obesity, due to their influence on the reduction of body fat accumulation and the improvement of various diseases related to obesity. Among those that can be useful against obesity are resveratrol and quereretina. The first can be found in the grapes and derived drinks, peanuts, berries and chocolate, and the second in the apple, onion, tea or broccoli (Figure 1).

However, although promising results have been obtained, two have been the concerns of the researchers who work in the use of polyphenols for the prevention and treatment of diseases: on the one hand, in most of the experiments with promising results, very high doses have been used, away from the doses that we can take through food, although it is worth mentioning the possibility of taking phenolic compounds as additives or functional foods (in which bioactive doses can be added). On the other hand, the insoluble character of phenolic compounds causes our organism to excrete through a metabolic pathway that suffers numerous transformations; instead of doing so as original compounds, they arrive at blood and tissues as conjugated molecules of different chemical structure (Figure 2). If those who reach the tissues are not original molecules, how will these biological functions influence?

In response to these headaches, in the doctoral thesis carried out in the research group Nutrition and Obesity of the University of the Basque Country/Euskal Herriko Unibertsitatea, we look at the firm hypothesis that the capacity to reduce the fat attributed to resveratrol and keratin could also be attributed to its metabolites? In addition, in the experiments, the use of doses was prioritized according to the amounts that could be consumed through food, unlike what the majority of the researchers had done until then.

To respond to this hypothesis, the use of cell cultures was essential. In the experiments in vivo, although it can be confirmed the effect that is obtained from the original compound, it is not possible to totally determine which metabolite are attributed the effects that occur in the tissues to which it is directed. Therefore, the most abundant metabolites of the two polyphenols mentioned (resberatrol and quereretine) were selected and their effect on 3T3-L1 adipocytes was checked. The 3T3-L1 cell line comes from the fatty tissue of mice, the most used in research on obesity. Adipogenesis is the process by which pre-adipocytes, still non-specialized cells, become adult adivenites that accumulate fat. If a molecule acts on this process (if it is “treated” during the process), the ability to accumulate fat from this adult adivenite could be reduced. On the other hand, if adipocytes are adults and are in contact with the phenolic compound, their fat content can be reduced. Thus, cell treatments were carried out in these two phases: along the process of differentiation of the pradipocytes, to check the effect of the molecules on adipogenesis and to confirm their effect on the mechanisms of reduction of fat in adult adivenites.

In general, we saw through numerous experiments that both resberatrol and some of the metabolites of keratin have bioactivity. The resveratrol metabolites analyzed (two glucuronated conjugates and one sulfatate) showed a reduction capacity of adipogenesis, as well as the original compounds, which caused a very similar fat reduction. In the case of adult adipocytes, on the contrary, of the three metabolites studied only two glucuronates reduced the accumulation of adipocytes, always below that of resveratroles. Therefore, metabolites are as effective as resveratrol in reducing adipogenesis, but the fat of adult adivenites decreases more effectively. Of the metabolites of keratin, only one in four studied (sulfatated) reduced the fat accumulation of adult adivenites to doses lower than those of keratin. When treating 3T3-L1 cells along adipogenesis, isorhamnetine (methylated conjugate) caused an inhibition of adipogenesis, which required 10 times the dose necessary for it.

What do these results tell us?

Adipocytes are cells that accumulate the excess energy of our organism in the form of fat and whose reproduction and growth is responsible for the expansion of fatty tissue and, therefore, the development of overweight and obesity. This expansion is due to two processes: hyperplasia (increase of adipocytes in tissue as a result of the proliferation of pradipocytes) and hypertrophy (increase in the size of adipocytes as a result of the accumulation of large amounts of fat) (Figure 3). The diffusion of adult adipose tissue is mainly due to hypertrophy, i.e., the accumulation of large amounts of fat in adult adivenites. Therefore, we can consider a very important result that a sulfatate metabolite of keratin reduces, at a dose less than the keratin itself, the excess fat of adult adivenites; the sulfatation of keratin can help its effect. In the case of Resberatrol, on the contrary, being the effect of the original compound more evident than that of its metabolites, we will not at all be interested in its metabolization. On the other hand, it must be taken into account that in adipose tissue, in addition to adult adipocytes, there are also differentiated and therefore not highly specialized pradipocytes that act as “reserves” for the process of renewal of adipocytes. Therefore, we must take into account the influence of adipogenesis control over the accumulation of body fat. If the metabolites of resveratrol have as much effect as the original compound in the process of differentiation of adipocytes, we could say that their metabolization is not a limitation. Due to resberatrol itself or its metabolites on pradipocytes, the effect will be similar. With isorhamnetine, the metabolite of keratin, on the other hand, in the treatment of pradipocytes, the effective dose is 10 times higher than the dose of keratin, not being so effective, in this case we would not be interested in its metabolism.

Finally, it should be noted that the doses used in this doctoral thesis are close to the amounts that can be found in blood and tissues after taking phenolic compounds. When describing the bioactive effects, so far extremely high doses have been used, which we would never find in blood and tissues of animals and humans. On the contrary, the doses used are much closer, so the results are much more comparable to what can happen in reality. 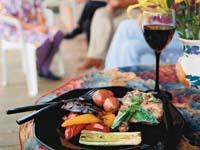