The climate emergency and the loss of biodiversity require a global commitment to the recovery of ecosystems. Global, which takes both objectives together into account, according to a study published by scientists from twelve countries in the journal Nature. They consider it essential to identify priority areas of recovery worldwide, since they calculate that with the recovery of 30% of them 70% of the disappearances of planned species would be avoided and half of the carbon stored in the atmosphere from the Industrial Revolution.

According to the study, 465 billion tons of CO2 would absorb and save the majority of mammals, amphibians and birds currently in danger, recovering 30% of the ecosystems considered priority. The data are revealing and the researchers have clarified what are the keys to their compliance: first, the objective of jointly addressing the climate emergency and the loss of biodiversity, since when one or the other is only taken into account, different patterns of recovery are followed and very variable results are obtained; second, global cooperation in the recovery of ecosystems; and, finally, perfectly identify the type and place of recovery of ecosystems.

Although, so far, priority has been given to the recovery of forest ecosystems and tree planting, the new study highlights that it has sometimes been done at the expense of native grasses or other ecosystems, which has meant a loss of biodiversity. In this way, it has been affirmed that to address the current crisis, in addition to forests, other ecosystems will be essential.

In addition, since many hectares have become agricultural land, it has been established as a condition that ecosystem recovery does not imply a significant reduction in global food production. The number of recoverable ecosystems has been calculated without reducing food supply and it has been discovered that 55% of ecosystems that have become agricultural lands can be recovered without interruption of food production. The researchers have affirmed that this would require a well-planned sustainable intensification and, at the same time, adopt habits that avoid the waste of food and the reduction of certain foods such as meat or cheese, since livestock demand large surfaces.

According to the researchers, and taking into account all the aforementioned factors, to jointly address the loss of biodiversity and climate emergency, the keys would be the recovery of wetlands and tropical and subtropical forests. In this way, it is estimated that this recovery would be 13 times more profitable.

In addition, a call for recovery has been made at the global level and at the level of international cooperation. In fact, when recovery efforts have been carried out at the national level, each country would recover 15% of its forests, the benefits on biodiversity would be reduced by 28% and the climatic benefits by 29% compared to doing so on a global scale. The cost increase would be even more significant: It would increase by 52%. Globally, it would allow each country to play a different and complementary role within that global goal.

All these data will be presented at the Convention on Biological Diversity (COP15) to be held next year in Kunming (China). The meeting has announced that they will provide accurate geographical information for the recovery of ecosystems, which is considered to be important for the achievement of the objectives of the meeting. 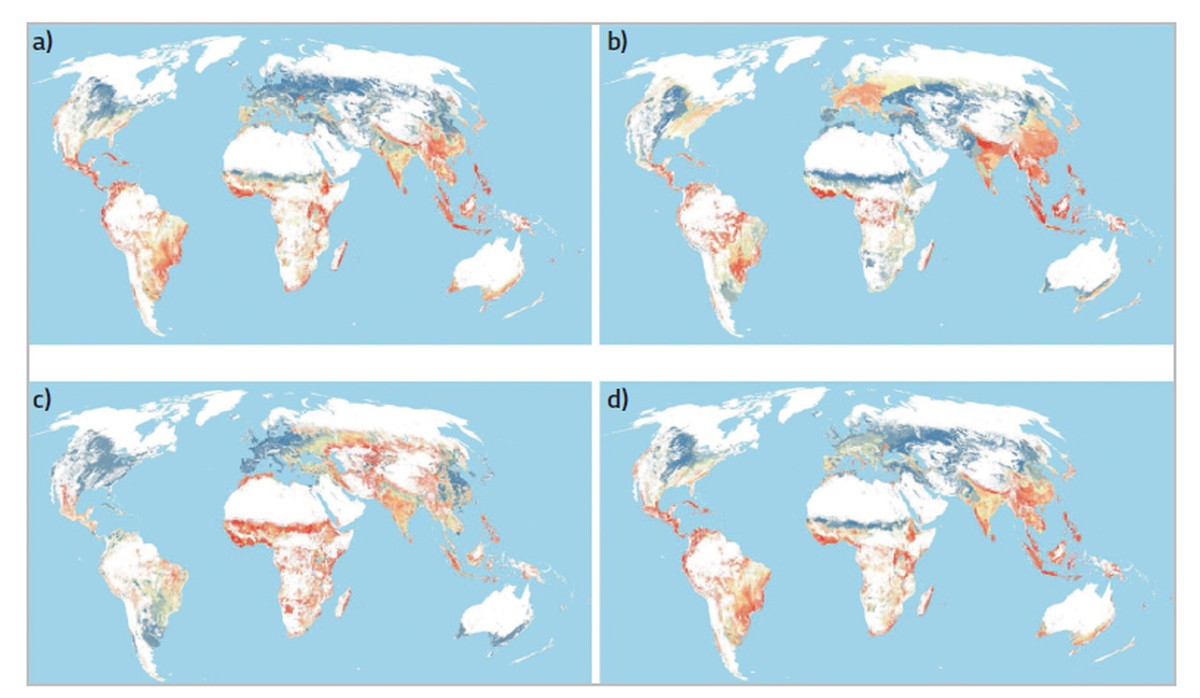 Priority areas for the recovery of ecosystems affected by criteria such as the recovery of biodiversity (a), the mitigation of climate change (b), the minimization of costs (c) and the combination of the three criteria (d). In red, the most priority; in blue, the least priority. Priority areas vary greatly according to the criterion (a–c), which highlights the importance of jointly considering the three criteria, according to the authors. Ed. Adapted from the journal Nature.

“We would leave the costs of conservation to the poor again”

What is your opinion on research and results?

It is an interesting theoretical exercise because it shows that the restoration of ecosystems can contribute much to the conservation of biodiversity and the fight against climate change, and it also suggests that the consideration of many criteria (biodiversity, climate, economy…) can contribute to the search for an optimal response. But it is very doubtful if it can be applied.

Some of the results confirm what we already believed: most of the biodiversity can be guaranteed in the restoration of tropical areas. Others, however, generate more doubts. For example, they show that the cost of restoration is higher in developed countries, which has led to the search for priorities in developing countries. I would say that under this, in addition to the current economy, there is a current policy. That is, in the developed regions the earth is more expensive, does it mean better to restore the developing regions? According to the way these types of measures are put in place, this can mean that the costs of conservation return to the poor.

What would be the priority ecosystems to be recovered in Euskal Herria?

In the Basque Country and in the European Union in general, it is quite clear what are the ecosystems to be preserved and recovered, priorities that have been taken into account when defining the Natura 2000 network, drawing the network of ecological corridors or drafting restoration plans. Another issue is to what extent we are able to comply with all this regulation. Sometimes I have the feeling that we conform to calling shelters, without dealing with the real problems of the species and habitats that inhabit them.

At the same time, in a small town like ours, the most effective conservation and restoration strategies are not frequently achieved through the analysis of maps, but through the knowledge of local values and the use of opportunities. For example, in the conservation of biodiversity, the fact that forests such as Artikutza and Bertiz have not been exploited for decades has influenced the conservation of nature. And many other factors can influence: for example, in recent times eucalyptus trees are spreading widely in our country. Being so poor, as it expands, the biodiversity of the Basque Country will be threatened and will not at all contribute to combating climate change.