Leonardo Torres Quevedo. Feet on the floor, head in the air

In San Sebastián, the torrential rains of September 30, 1907 did not disrupt the expectations of the people gathered in Ulía. At a distance of about three hundred meters between two summits, six cables were well laid, of which an iron boat was hung for 18 people. A spectacular device, the one that was to be inaugurated that day. First global air shuttle for people.

“The novelty that San Sebastian has offered this summer to his colony is the air ferry of Ulía, which was said by the Madrid daily La Correspondencia de España, on August 27, 1908, which goes from top to top, taking travelers without hassle to the cliffs. The platform, hung of metallic threads, crosses a deep cowbell. The short journey excites”.

The inventor of Ulía's air ferry was Leonardo Torres Quevedo, already famous. Born in Cantabria in 1852, he spent his youth in Bilbao. His father was from here. As his parents were absent for work, he lived long in the house of his family or friends, especially at the home of the sisters Concepción and Pilar Barrenetxea. The latter, in addition, left all his fortune to Leonardo. 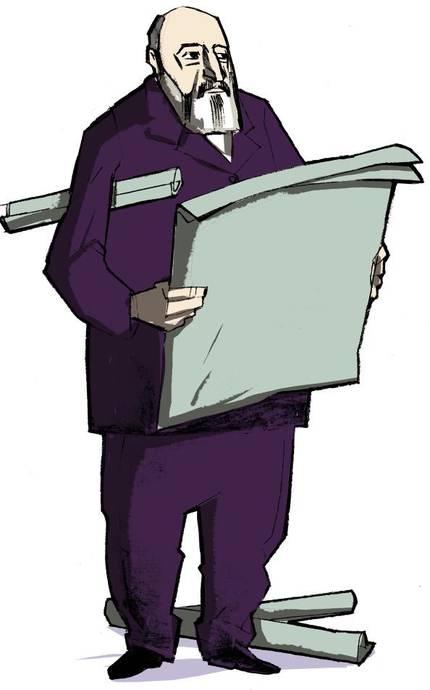 He studied engineering in Madrid and at the end of his studies he began traveling through Europe to learn about the latest scientific and technological advances. Barrenetxea's legacy allowed him to travel and do what he liked most: investigate and make inventions.

He married in 1885 and settled in the Cantabrian village of Portolín. There he created the first ferry. A chair hanging from a few wires left the house 200 meters away and went up to a meadow located 40 meters high, with the strength of a couple of cows. From there, in 1889 he patented the air shuttle for the transport of people. The following year he presented it in Switzerland, but it was not successful and did provoke mockery in the local media.

He abandoned the idea of ferries and immersed himself in the world of algebraic machines. In 1893, aged 41, he presented his first scientific work: “Memory on algébric machines”. It was a theoretical work on analog calculators.

He also joined the aeronautics, offering in 1902 excellent solutions to some of the problems of the guided balloons. Four years later, the balloon is patented by car. In this design, Torres Quevedo himself explained that “all the rigid metal elements of the slag, which in addition to weighing a lot, make it very difficult to drive, are replaced by a rope beam. [...] When filling the gas balloon, the pressure tightens the strings, which gives it the same consistency as a rigid structure. Once the balloon is emptied, it can be collected and transported comfortably.”

The balloons of Torres Quevedo had a great success. Especially years later, during the First World War. France made more than 20, UK more than 60, Russia four, USA six and Japan one.

And the balloons took him to another great invention. Concerned about the risk of testing experimental balloons, he invented a remote control system. In 1903 he presented at the Academy of Sciences in Paris the telequino, the first remote control in the world by radio. After several improvements and tests in the coming years, in September 1906, it was exhibited in the port of Bilbao. He congregated. Torres Quevedo drove a boat from the terrace of the Abra Maritime Club.

After this successful demonstration, in the following month, several Basque companies created in Bilbao the Association of Studies and Engineering Works. The first point of the bases of the Association made clear the objective: “Study and experimental execution of projects or inventions presented by don Leonardo Torres Quevedo”. This association promoted the development of the ferry project on Mount Ulia in San Sebastian. So yes, the ferry was successful and became similar in several countries. The most famous was the Spanish Aerocar in the Niagara Falls. It is currently still working.

Torres Quevedo, of great prestige, created the Laboratory of Applied Mechanics of the Spanish State. Later it would become Automatic Laboratory, since Torres Quevedo would open this new field of engineering. In 1914 he published Essays on Automatic. In this work, Torres Quevedo said that automatons would be able to make decisions. In addition, he introduced background for the digital performance of arithmetic operations and cited Charles Babbage's analytical machine, indicating that he failed for the mere use of mechanical procedures.

That same year he presented the Chess automaton. That machine was able to act against a human being in a very simplified chess. The machine moved a tower and the king, and the contrary only the king. The machine responded according to the movements of the opposite and always came to the chess mata. In addition, the trap could not be made; if the opposite made some incorrect movement, the automaton protested and three times it was off.

The machine provoked a great admiration. But even more Torres Quevedo gave it. In 1920, when he was 68, he presented the electromechanical arithmometer. It was a device capable of performing arithmetic operations, connected to a typewriter. The intended operation was written on the typewriter, calculated the machines, and wrote the result on the typewriter automatically. Many believe it was the first computer.

ARAMBERRI, J. (): “Torres Quevedo, the other Leonardo”. Euskonews and Media.

VELASCO, J.J.(2013): “Leonardo Torres Quevedo, a Spaniard ahead of his time.” Blogthinkbig.com