On October 17 last year, the violent San Francisco earthquake struck. Of course, it was the movement of the San Andrés fault. There is no one in the world who studies and cares better than that failure, but they cannot predict exactly where, when and how earthquakes will be.

The San Francisco earthquake of 17 October, measured on the Richter scale, was 7.1. In the village of Santa Kutz the wooden houses were destroyed, but in the city of San Francisco the houses are still standing. This means that it is possible to combat earthquakes with certain measures in construction. However, seismologists expect a major earthquake and claim it will exceed 8 degrees of the Richter scale.

Last year's earthquake was born 18 kilometers northeast of Santa Kutz, in the place called Loma Prieta, under the mountains. When October 17 was five and four minutes (here one in the morning and four minutes on October 18), the inhabitants lived fifteen seconds of terror. The earthquake caused 63 deaths, 3,000 injured and 260,000 million pesetas of material damage. In the United States it has been the sixth in intensity and the third in number of victims. However, knowing that six million people live in that territory, the number of dead and wounded does not seem high. In December 1988, for example, in Armenia, the 6.7-degree earthquake killed more than 25,000 people dismantling the villages of Spitas and Leninaka.

In California, therefore, prevention has brought its benefits. Don't forget that in 1906 a 8.3-degree earthquake in San Francisco (15 times more energy than last year) disappeared from the map. Since then houses and buildings have not been built anywhere, and seismologists are also studying all the details and movements of the San Andrés fault. These studies suggest that this is a new earthquake of more than 8 degrees.

The San Andrés fault crosses California from north to south from Cape Mendezino to Mexico. It has 1500 kilometers and is the meeting point of two thick tectonic plates, the Pacific Plate and the North American Plate. These plates do not push each other. One (oceanic) slides north and the other (north american) to the south, moving every year between 50 and 60 millimeters from the song.

The displacement between the two tectonic plates does not occur continuously, but periodically. The energy accumulates as in a dock and when the accumulated energy reaches a level of overcoming the friction force, the locals feel an earthquake. 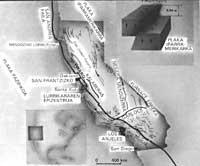 The Californian territory, located west of the San Andrés fault, will one day become an ocean island, but before the city of Los Angeles will travel 800 kilometers to San Francisco in the next 30 million years. However, this sliding between two plates generates more than 15,000 earthquakes annually. Many of them are so that people don't feel, but sometimes it's usually a big one.

However, only the San Andrés fault is not the only one that is raping in California. San Andrés has its branches like a river. Parallel to the east of San Francisco is the fault of Hayward, to the south are also in San Jazinto and Imperial and among all (more than one hundred) the subsoil is extremely complicated and fragmented. In addition, every month new failures are being found anywhere. One of them is under the Diablo Canyon nuclear power plant and they don't know if this failure is in effect or not. After recording earthquakes in the Los Angeles area, they also find a special fault. The fault is not in the vertical plane, but horizontal, a few kilometers deep.

Although they don't know the subway, seismologists know a lot about the behavior of the San Andrés fault. Since 1932, 170,000 earthquakes have been recorded and the data has been inserted into the computer. That is why they know with some probability the behavior of each part of the fault over the next thirty years.

The San Andrés fault has remained silent during recent times; too long, according to seismologists. That is why they say that with a 40% probability in the next 30 years there will be a 7.5 degree earthquake in Coachella Valley. Further north, between San Bernardino and Parkfield the risk is high in the short term. They know that there the great earthquake occurs every 140-150 years and that the last occurred in 1857. In the year 132 deformations accumulate of 4.5 meters waiting to burst. However, this energy can be released tomorrow or within 50 years.

In Monterrei County is the small town of Parkfield, halfway to Los Angeles and San Francisco, where an average 6-degree earthquake is known every 22 years. The next one will be in 1993 (90% probability).

Parkfield's land and subsoil are full of sophisticated instruments. There are two-color laser telemometers, for example, that measure the displacement of the terrain with an accuracy of five tenths of a millimeter. The sensors are located 300 meters deep in the subsoil, recording, analyzing, interpreting and modeling any friction or movement.

Simulating the earthquake can test the strength of the building.

In southern California there is another seismological center. Through Pinon Flat lasers and other instruments, they observe any underground terror, but the target is not the same as in Parkfield. In the earthquake of Pinon Flat will also participate satellites to give orders. If the earthquake occurs at a certain distance from the villages, there will be some minute to do something. Trains will stop where they are, traffic lights will be placed in red, lifts will stand on the foot, bridges will close, etc.

Last year's Loma Prieta earthquake hasn't changed things. They know that in the San Francisco area there is a 50% chance of suffering a 7-degree earthquake in the next 30 years. In Los Angeles the risk is higher. The probability of an earthquake between 7.5 and 8 degrees is 60%.

Some day they will get higher probability figures, but there is no choice but to run faster than seismic waves.

Buildings against the earthquake

Two weeks after the earthquake last October in San Francisco there was no indication of anything. In the tall and long houses of the main avenues no fissures could be seen. Only on the bridge “Bay bridge” and on the viaduct “Cypres over pass”. Most of the dead (43) occurred in the viaduct built in concrete in 1957, being trapped between overlapping roads as in the middle of a “sandwich”.

In the construction of this viaduct two main mistakes were made if we look at the seismic part. On the one hand, the transverse armor was too weak and on the other, the steel bars in the reinforced concrete columns had discontinuities in the longitudinal armor. Due to the breakage of the steel bars in the junction area of the vertical columns and the horizontal beams, the bases of the columns in the earthquake were cut by cross shear.

As for the homes, the most affected have been the “Marina” of San Francisco and the “Mall” of Santa Kutz. They are wooden buildings with large garage on the ground floor. These empty spaces, due to their transverse displacement due to the earthquake, are seismically harmful. In the “Marina” building, however, the pavement situation under the house was the worst. This building, built in 1915 as a lake fill for the World Exposition, behaves like a liquid solado in earthquakes. The foundations only find mud in this case. 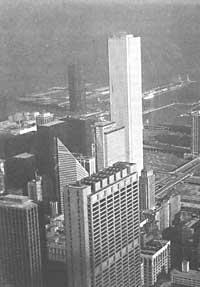 San Andrés and California Fault. Other nearby failures appear.

The fact of suffering an earthquake of more than 7 degrees means that the houses of California are built taking into account earthquakes. The measures and publication of the standards began around 1930. One of the main standards is fixed floor construction. In addition, foundations must be chained and connected in two directions and buildings must be as simple as possible in form. Buildings without symmetry or with important symmetry are nothing good to withstand earthquakes. The most suitable shape is the rectangular.

Materials used in construction should be flexible, resistant to relatively large deformations before breakage. Steel, for example, is a flexible material and glass and bricks are fragile. Therefore, vertical and horizontal reinforcements of reinforced concrete should be placed on brick walls.

Another problem to consider is that of horizontal forces. To withstand the horizontal forces caused by the earthquake, reinforced walls in two directions, stair boxes and concrete plates are needed.

Logically, compliance with these rules is more expensive than non-compliance. But not much more expensive. The cost of the work only rises between 2% and 5%, which is very cheap depending on what should be spent after the earthquake. 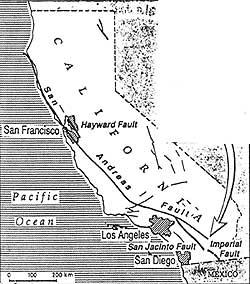