"I was curious to learn chemistry"

In December 2014, the magazine Elhuyar created the section "In action", with the aim of collecting the experiences of young researchers. In fact, the scientific system often hides its contributions and promotes its abandonment. Given this, the magazine Elhuyar, with the collaboration of the Chair of Scientific Culture of the UPV, has brought its voices to the center. Now, with the aim of deepening the inclusive perspective, the magazine has decided to expand the section to others who are hidden. The first example is Oier Lakuntza Irigoien. 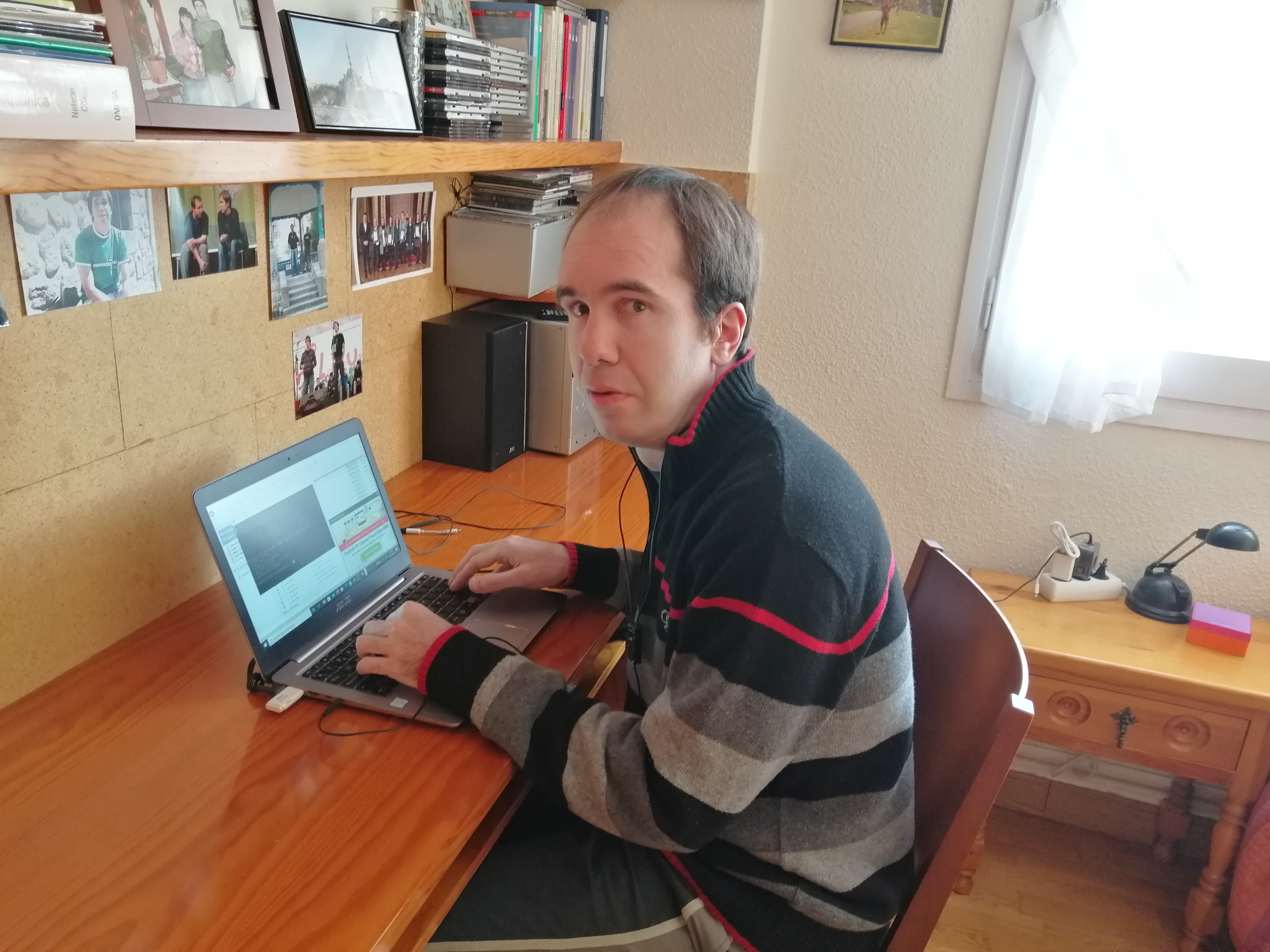 Oier Lakuntza Irigoien has lost sight and decreased hearing. This has not prevented him from being a bertsolari and researcher of the CIC Energigune. It has not been an easy way.

For example, when he decided to study science in high school, he recalled that those around him recommended playing the lyrics because they were easier: “They told me I could do something like Basque journalism or philology. But I always wanted to learn science, especially chemistry. And I knew that if I didn’t get on, I would stay forever.”

He confesses that every time they started a new topic of chemistry, curiosity arose. That was his desire to learn chemistry and he did not repent. He could not perform laboratory practices: “I was next door and sometimes I would get bored. He tried to understand the procedures and work on a theoretical level, but could not experience.

In addition, I had difficulties taking notes. In fact, the computer writing system of braille has no signs of scientific formula. Therefore, he had to ask for notes to the school classmates and at home he received the help of his parents to complete them. “It was a great job and I also had to ask for it to advance, both to get notes and to explain to the teachers my situation. It is true that on the part of some classmates I received a lot of help, and some teachers also tried a lot, but on the part of the university I did not find a structure to deal with these situations.”

Despite the difficulties, he obtained very good results. Thus, when the race ended, he wondered if he should leave his scientific career there and decided to continue in the world of chemistry. He knew that in a laboratory it was going to be impossible, but he discovered that at the University of the Basque Country there was a doctorate in theoretical and computational chemistry, and he contacted his boss, Jesús Ugalde Uribe-Etxebarria.

“They received me well and I decided to do the doctorate there,” explains Lakuntza. He did his thesis on methane activation and the postdoctoral thesis went to Tarragona, Catalan Institute of Chemical Research. But his goal was to return to Euskal Herria, and when he learned of the possibility of CIC Energigun, he passed it.

In fact, despite the fact that the CIC Energia is mainly dedicated to applied research, there is a team dedicated to computational chemistry that thought it could be a good place to continue investigating: “I spoke to the head of that group, he welcomed me well and when I obtained the ministerial fellowship Juan de la Cierva I went there. Since then I’m working there.”

Despite having managed to progress, it has not been a field of roads, it has had to face a multitude of obstacles. “It is true that since I left the faculty I have not walked through any laboratory. I have worked in theoretical chemistry and, in that sense, it has been easier for me to adapt. In any case, it took me a lot to move from being a student to having a research mentality. In the same way, I noticed a disproportionate tendency on the part of others to want to facilitate things many times. For example, as I am blind, I need more time and dedication than those who see to understand some aspects, and many times they told me that, instead of dedicating myself to explaining things, I would do another. After finishing the doctorate, I also saw a kind of fear of what path I was going to go…”, Lakuntza has accepted.

In his opinion, if science has to be really integrative, we would have to change these things and believe that it would be convenient for research centers and work centers to have more resources and supports to meet special needs. “There is a great void and a lack. When I entered the UPV computational chemistry group, I was the first blind man to enter there, and there was nothing planned to fit and work with others.”

Now CIC Energigune is investigating materials to store energy. The work he has done so far, therefore, is very different and has been a great challenge. “But I think I have overcome it well,” he says. Looking ahead, he prefers to go up to date without major forecasts: “The stability in the world of research is difficult and with my limitations it will be even more difficult for me. For the moment I have a contract for another year at CIC Energigun and then we will see it. If, like Pamplona, I found something there, I would love it.” If he returns to Pamplona, he does not even abandon the world of research, but, meanwhile, he will continue to investigate to satisfy his curiosity.

Born in Pamplona in 1985. At 6 years of age, Wolfram syndrome, was diagnosed with a rare neurodegenerative disease. After completing his degree in Chemistry, being blind and deaf, he completed his doctorate in Theoretical and Computational Chemistry at UPV under the direction of Jesus Ugalde Uribe-Etxeberria. After two years at the Catalan Institute for Chemical Research (ICIQ), he is currently a researcher at CIC Energigune.