Ten years have passed since the first GM crops began to be commercialized. Since then, GM agriculture has only grown. Each year, farmers bring more surface to GMOs, and more and more countries admit genetically modified varieties. 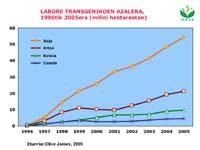 Therefore, it is no wonder that ISAAA leaders are satisfied. ISAAA is responsible for the applications of biotechnology in agriculture and, as every year, has published a report on transgenic productions. According to the data presented, there is no doubt that GM agriculture is constantly growing.

In fact, GM crops now occupy 50 times as much surface as in their beginnings. In 1996 they were only cultivated in six countries and occupied 1.7 million hectares. Last year there have been GMOs in 21 countries totaling 90 million hectares. Already 8.5 million farmers grow genetically modified plants.

Soy is the most cultivated GM, especially transformed to be tolerant of herbicides. Thus, 60% of GM crops are soy and, in addition, more than half of the soya that is sown is already transgenic. Soy is followed by cotton (28%), followed by canol (18%) and corn (14%).

Like soy, other plants have been transformed to be tolerant of herbicides. Thus, herbicides kill weeds in the field without harming the planted. Other transgenic varieties, on the other hand, have been transformed to be resistant to insects, thus avoiding insect pests. And some varieties collect both characteristics. In all cases, the goal is to improve performance, that is, concentrate it a lot.

Other times biotechnology is used to give other characteristics to the plant. For example, golden rice with abundant vitamin A. This aims to eradicate the serious health problems resulting from the shortage of vitamin A. That's what at least those who have created and marketed it say. 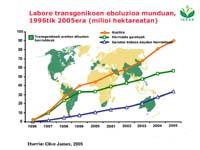 However, many consumers still look with suspicion at GMOs, especially in Europe. Thus, until recently there was no permit in European countries for the planting of transgenic varieties. But gradually the European attitude becomes more flexible and more and more varieties are allowed. At the same time, the area dedicated to GMOs increases in the continent.

Within Europe, Spain has been the country that has cultivated the most GMOs since the beginning, and remains a leader today. According to ISAAA, maize is the GM grown in Spain and occupies 0.1 million hectares. They also produce transgenic maize in Portugal, Germany, France and the Czech Republic, but less than in Spain. However, in all of them the area dedicated to GMOs grows.

The countries in which GMOs occupy more than 500,000 hectares are called mega-producers by ISAAA. They are fourteen in total, being the only one in the European Union: Spain. By far, the United States is the country that produces the most GMOs. It is followed by Argentina, Brazil, Canada and China, and the rest are Paraguay, India, South Africa, Uruguay, Australia, Mexico, Romania and the Philippines.