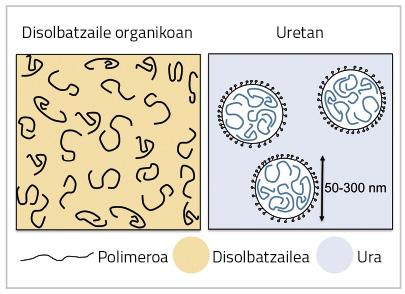 Coatings or coatings (paints, varnishes, lacquers, inks…) are necessary in today’s life, since almost all surfaces must be covered. Its main functions are the protection and decoration of the surface [1]. Steel and wood stand out among the surfaces to be protected. If the former is not protected from oxidation and the latter from the atmosphere, the products and structures manufactured with these materials would last very little, but the coatings allow lengthening for several years. Decorative coatings are used to make products more attractive.

Coatings compositions are often very complex and have many components. These include polymer, fillers, pigments and additives. The polymer acts as a binder and generates a matrix in the coating that binds the rest of the components. The mechanical properties, brightness and barrier capacity depend on the polymer, which is the component analyzed in this work. Before the coating or paint dries, all components are dispersed in a continuous liquid phase that can be an organic solvent or water.

Figure . Representation of four stages for obtaining a continuous film from a dispersion of polymers. Image courtesy of: Aitor Barquero.

Although initially coatings have been marketed in organic solvents [2], in recent decades the market is moving towards water-based coatings. The main disadvantage of these first coatings is the emission into the medium of volatile organic compounds (VOCs). COVs are low-boiling solvents such as acetone, ethyl acetate and aliphatic hydrocarbons. They smell bad, many are toxic, increase the greenhouse effect and increase climate change. On the other hand, in water-based coatings, the continuous phase is water, so products have (or do not) low COVs content. This makes products safer, cheaper and easier to use.

Although they are more convenient to the environment, water-based coatings have their limitations. In this type of systems the polymer is not dissolved but in a colloidal dispersion (see Figure 1). To maintain dispersion stability it is necessary to use polymeric emulsifiers or stabilizers that increase the sensitivity to the final coating.

The process of obtaining a film from aqueous dispersion is complex and consists of four stages or situations, as shown in Figure 2. At the beginning of the process (stage I) the polymer particles are dispersed in the water. As the water evaporates, the particles move closer, touching each other and forming a compact structure, interspersing water (II. stage). When the water continues to evaporate, if the particles are quite soft, they begin to deform forming hexagonal structures (III. stage). Then the chains located in deformed particles expand each other, delaying each other, obtaining the continuous film (IV. stage) [3].

For the coating to have good properties it is necessary that the film is very well formed and that there are fewer errors. Therefore, it is essential III. and IV. properly develop the transition between stages. Nuance formation is easier when the mobility of polymer chains is high. The problem is that the mobility of the chains is very related to the hardness of the polymer, and in general, as the mobility of the chains increases, the polymer is softer. This is a great challenge to get good quality films but with good hardness from water dispersions.

To address these limits there are several options, such as the addition of additional functionalities to the polymer. For example, the penetration of polymer chains improves the mechanical properties of the coating, as well as the resistance to solvents, water and abrasion. Polymer penetration chemistry is already known [4], but it should be noted that it is not easy to obtain the film from a dispersion of polymers already entangled, since penetration also prevents the mobility of chains. Therefore, the only possibility is that penetration occurs during or after film formation.

There are several strategies that can be used to achieve this goal. This work has investigated the use of monomer alcoxysilans. These monomers are special because they have two types of functionalities or reactive groups. On the one hand, they present a double link that can participate in polymerization by free radical, represented in red in the structures indicated in figure 4. This group enables them to react with the other monomers that will form the polymer chain, forming functioned chains such as those shown in Figure 5(a). 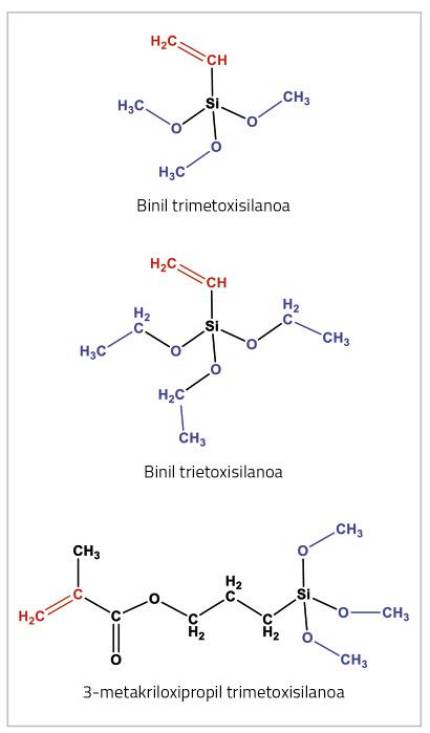 On the other hand, there are three groups of alcohol represented in blue in Figure 4. Alcoxi groups can react with the water in the environment through reactions called hydrolysis [5]. In the case of trialcoxysilans, because there are three groups of alcohol per molecule, they can react with 3 water molecules. As a result of this reaction, the alcohol groups that are part of the chain become silanol groups (-OH groups) attached to silicon, which are shown in red in Figure 5(b).

Newly created silanol groups are able to react to each other through reactions called condensations. As a result of the condensation reaction, a water molecule is released into the medium and the two silanol groups are joined together forming bonds called siloxans. Since silane is part of the polymer chain, this reaction causes the chains to be joined together, as shown in Figure 5(c) in green.

After the condensation reactions, the polymer chains will no longer be loose, but in the network structure. Among the characteristics of grained polymers it is important that solvents are not able to distribute the chains that form the network. Therefore, to quantify the effectiveness of penetration reactions it is very convenient to know which fraction of the polymer does not dissolve. The solubility analysis can be performed qualitatively, submerging the polymer film into the solvent and analyzing whether it dissolves or not, as shown in Figure 6. But not only that, extraction allows quantitatively measuring the percentage of dissolved polymer. The fraction of polymer that remains undissolved is called gel content. If silane is very effective, the degree of penetration will be higher and therefore the gel content.

Figure . Polymer chains functioned with trialcoxysilans monomers (a) are able to hydrolyze with water forming silanol groups (in red, b). Then, due to the condensation reaction of the silanol groups, the chains join each other with links called siloxans (in green, c). Image courtesy of: Aitor Barquero.

Hydrolysis is an indispensable step for condensation reactions and therefore penetrations. Therefore, as the silent alcohol hydrolyzes, more groups with penetration capacity are formed. In other words, when the hydrolysis level of the silane is higher, the penetration capacity of the polymer will also be higher. Not all alcoxysilans are hydrolyzed at the same speed and, according to the chemical structure of the alcoholic group, the reaction is faster or slower. In general, the larger the size of the alcohol group, the slower the hydrolysis.

However, the use of alcohols has more challenges. The silane gives the polymer an additional (and perhaps undesirable) capacity. In conventional systems, once extracted from the reactor, the properties of the polymer do not vary over time, but this does not occur in aqueous dispersions of silane modified polymers. Because of the presence of water, hydrolysis reactions can also occur during polymer storage and, once silanol groups have been formed, condensation reactions may begin to occur in dispersion before film drying. This means that over time the dispersion polymer structure will vary during storage and therefore the film properties will change. 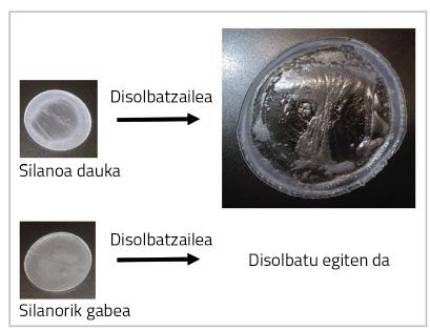 Figure . Polymer film with silane (1% by weight) and without silane before and after its introduction into the organic solvent. Image courtesy of: Aitor Barquero.

But not all are bad news. In fact, the speed of hydrolysis and condensation reactions can be controlled by modifying the pH of the medium. When the pH is close to 7, hydrolysis and condensation reactions are very slow, so the polymer does not have a significant evolution. However, pH acidification or basification accelerates reactions. This allows, by selecting suitable monomer silanes and pH, to adjust the coating availability time and obtain maximum silane efficiency.

The fight against the greenhouse effect and climate change is a challenge for the whole society and solutions must come from all sectors of technology. Although in principle it does not seem, coatings have a capital importance, since extending the survival of structures reduce the exploitation of natural resources. In this field, silent alcohol monomers offer a unique opportunity to replace the coatings currently used (or under development) with new sustainable water-based coatings, which enhance their properties and reduce the use of solvents. 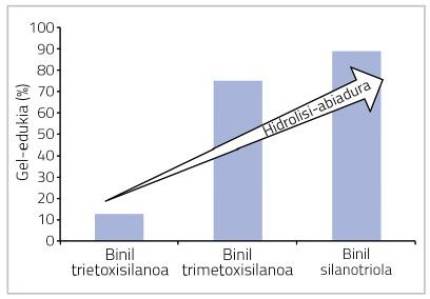