Green economy, a solution for the future

In May 2020, in the middle of the first wave of covid-19, a large group of scientists and academics presented the manifesto "For the Ecological Economy of the Basque Country" after covid-19. To deal with the crisis, the manifesto proposes five strategic lines. It was not there, and in February 2021 they sent an open letter to society in order to reflect and promote change: [Ecological reconstruction of the economy]. In May, on the road to turning claims into action, economist Mirene Begiristain Zubillaga and biologist Arturo Elosegi Irurtia explained the keys to reconstruction in a public talk. The journal Elhuyar presents the main reasons and conclusions of this edition. 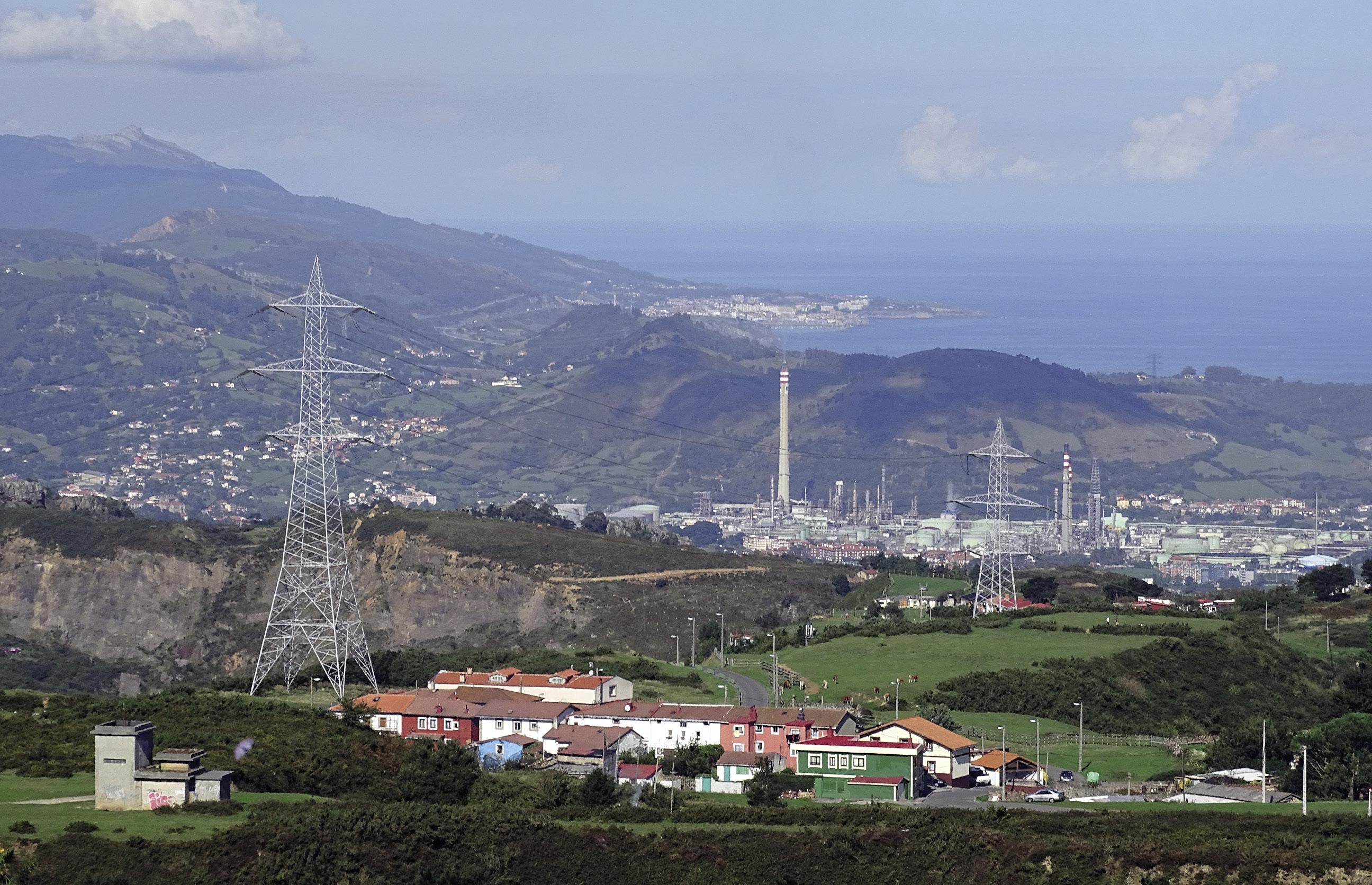 Biologist Arturo Elosegi Irurtia began the session with a recognition: “When you talk about economics, I feel an idiot.” In fact, one of the meanings of the idiot word is “that person who, being evident to others, does not understand what happens or what explains it”. And apparently that's what happens to Elosegi, because the evidence that he knows overrides the mantras of economics: economic growth is the solution to all the problems that we have; the free market is the only way; markets self-regulate; new technologies will solve all the problems of today; it's better not to face a problem today, because in the future it will be cheaper.

According to Elosegi, the current crisis is not health, not economic, but environmental. Remember that it already comes: “In 2017, more than 15,000 scientists from around the world signed a warning to humanity. It was the second warning. The first was published in 1992 at the Rio climate summit. Measures were taken but nothing was resolved and the second warning is 25 years later. Although something has started to change in certain aspects, in general we remain the same and the environment has become a limiting factor, not to live well, but to live”. 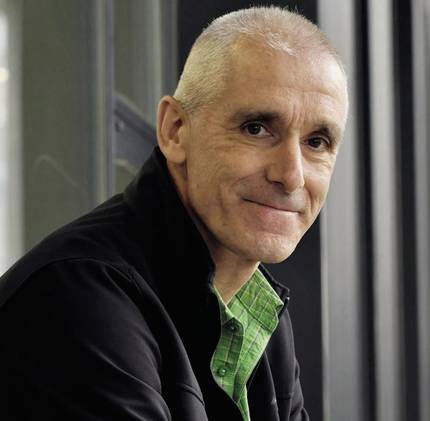 This has been clearly seen with covid-19. In addition, Elosegi has pointed out that we have built a fragile society. For example, a few months ago, a ship ravaged the Suez canal, an event that threatened the global economic system. “This shows that the system is not appropriate, that it is convenient to change it.” On the other hand, the importance of caring for the most vulnerable groups and the difficulty of predicting the future has become apparent. “Therefore, for the future, it is important to have a flexible, adaptable system.”

Another unforeseen consequence is that society is willing to accept certain changes overnight if circumstances compel it. Proof of this is the need to wear masks, last year’s strict containment…

From all this, Elosegi has drawn the following main subjects: we cannot continue to grow, we cannot intensify our activities, the environment will be increasingly important, in general, we are a rich society and therefore we can take care of our primary sector, and the current actions will have long-term consequences. It is clear: “Descendants will judge us according to the world we have left them.”

Agriculture and food in the centre 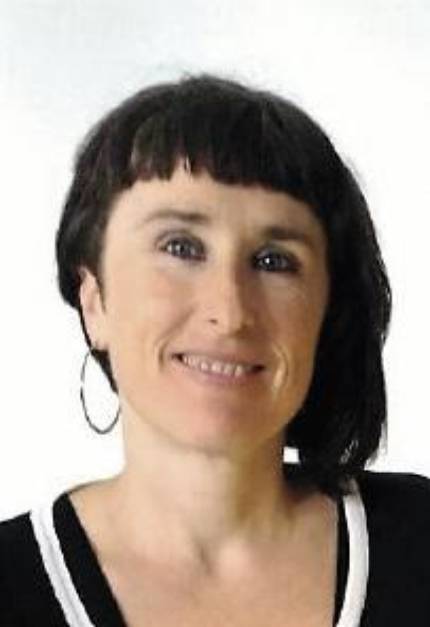 Mirene Begiristain Zubillaga threw Elosegi from the agri-food point of view. In fact, agriculture has a direct impact on some of the main factors related to the climate emergency: land and water use, biogeochemical flows (nitrogen, phosphorus), genetic diversity… It also mentioned some consequences of climate change, such as those observed in food security, the local economy, social (both local and global) cracks and social health (such as covid-19).

It also provides some significant data on the current situation, including the cause of reduced emissions from agriculture and food production: “It is true that in recent decades there has been a decline, but it is largely due to the production of the food we consume here, not to the improvement of our system. In fact, 90% of food comes from outside.”

He also warned that rural areas are being emptied. There are fewer and fewer farmers, their income is 30% below the average and they are becoming older (58.1 years on average). “There is no relief. On the other hand, only 38% of farms are on behalf of women and, in the case of dependent people, women take this care”, he said.

Other problems are the concentration and artificialization of agricultural land, the unfair distribution of subsidies, the imbalance between fresh and processed food, where food is sold and how long it is allocated to cooking and feeding, diseases associated with diet… 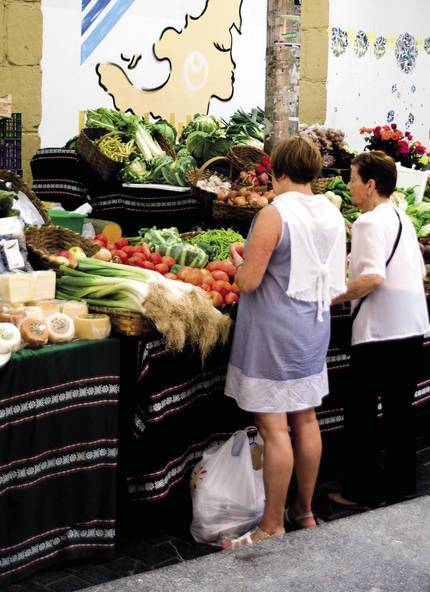 The Fir of the Feminist Economy

To explain its essence, Begiristain has brought an image proposed by the feminist economy: the image of the iceberg. “Above the water level, there are the public goods and services included in the gross domestic product. And it underlies everything necessary to maintain it, essential to live, but which is not taken into account in the economy, that is, everything that the community gives us, the care of homes and natural systems”. They fall below the water level, therefore, neighbourhood, conservation, identity, self-esteem, natural goods and basic natural services…

Monitors and colleagues have taken the fir of the feminist economy to the food system. In fact, most of the time it is represented as a linear feeding system: production and distribution consumption. But it actually reproduces the oppression of the capitalist economy, and in this case, at the top of the iceberg is the link of distribution.

However, he stressed that the economy is a social science and has solutions. We can imagine four main scenarios, according to Begiristain. The first is to ostrich, to continue with this neoliberal economy. The second is the green agreement, in which economic growth is still aimed. The third is ecofeminism, and the fourth, within the green convention, poses the need for a decline. 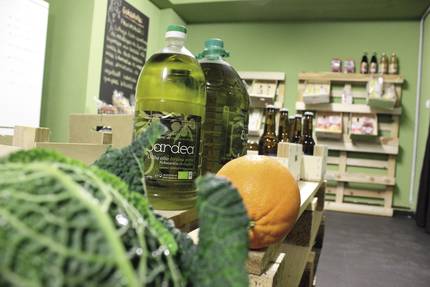 Society is in the hands of the introduction of an ecological economy, within ecological borders. ED. : Araialdea/BYSA.

Faced with these scenarios, he has claimed that having a healthy diet within reach of all is a right and that the key is not the chosen scenario, but how we will make the transformation. “To build the food system of the future, we put on the table a vision of agroecology, within which we understand not only the ecological but also the economic, social and political-cultural aspects.”

He emphasizes that agroecology is not a marginal claim, but has been recognized by the main international organizations: Global agriculture studies led by FAO, IPCC, IPBES, the European Commission's Agroecology Opinion and the World Bank and FAO (IAASTD). It also stands out in the manifesto for the ecological economy of Euskal Herria after COVID-19.

On the path of agroecology

“From the point of view of agroecology, we have analyzed what research and innovations we need to push for a sustainable food system in 2030. This exercise was attended by different actors in the Basque Country and we asked them what the challenges were. Through a complex methodology, we have come to define twelve challenges in four dimensions: governance and empowerment of communities; environmental sustainability; food, health and welfare; and models of production, employment and exchange. And those twelve challenges are related to action plans.”

It highlights the systemic vision and the transversality of the environment. “Within this, we propose to work food strategies in a regional way. To this end, we have defined seven points: land, water and healthy soils; healthy and climate-resilient agricultural ecosystems; new respite routes; adequate, healthy and sustainable diets for all; public purchasing criteria (schools, nursing homes, nurseries, food banks, cultural centres…); fairer, shorter and more transparent local distribution networks; trade, tourism and urbanism in the service of sustainable development; and, lastly, putting multinational governance at the service.” 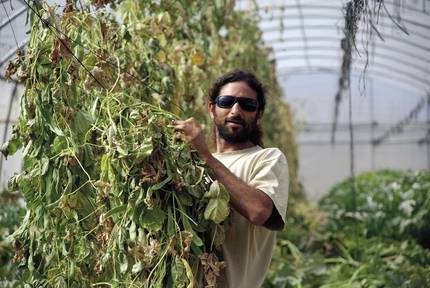 The lack of relief is one of the problems of traditional agriculture. Most farmers are older. ED. : Archival.

It confirms that there are examples and tools for each of these points. To this end, it considered that collaboration between the different actors was necessary and highlighted a joint initiative with Argia: We call the Earth the people.

Elosegi agrees with Begiristain that there is a need to set limits to growth at all levels and that citizens can also do a lot: “Governments have a great influence and continue to drive industrial agriculture. But apart from governments, I think people have a lot to say. Each of us can start to reduce our consumption. And it's not going back to caves: in many ways we can live in a similar way by reducing consumption. In addition, I think it is the task of everyone, that the authorities explain or express how we want to do things and what matters.”

Proof that the initiatives emerging from the village can be effective, for example, the success of the trade fair opening movement in the confinement of last year. Mr. Begiristain recognizes that it is not easy to articulate initiatives that bring together such different actors, but they did. And in another way, it was also possible to create, agree and launch a manifesto in favor of the ecological economy of Euskal Herria after covid-19. A large group has recently published the Covid-19 White Paper with concrete proposals to emerge from the crisis.

“The leap comes from individual reflection to collective,” says Begiristain. “We live in a very fragmented society and we need to open and organize for social innovation.” Degrowth does not represent a loss, but a cultural change in which challenges are addressed from the point of view of care and the culture of distribution is internalized. “And that means asking people, that is, degrowth requires processes to start from another logic. Asking is very powerful and bottom-up answers are very strong.”

In this sense, Elosegi considers that the main problem when asking these types of questions is the lack of imagination: “We dare not imagine a different world and the things we have to do to achieve it. I'm going to give you an example of my area. The Oria River, 40 years ago, was irritable and society accepted it because it was the payment of our welfare. And those who proposed solutions to improve river health were considered crazy. But when industrialization started to change and the first fish appeared, society started to change. This is a radical change in the relationship with nature. Today no one would accept the pollution levels that were accepted in Euskal Herria 50 years ago.”

The imagination, therefore, is key to Elosegi: “At that time nobody imagined that the Oria could be clean. We lack imagination. If we imagine something, we may dare to look for that courage.” In addition to imagination and courage, Begiristain and Elosegi have put forward concrete and open proposals. So there's where to start to have a better future. 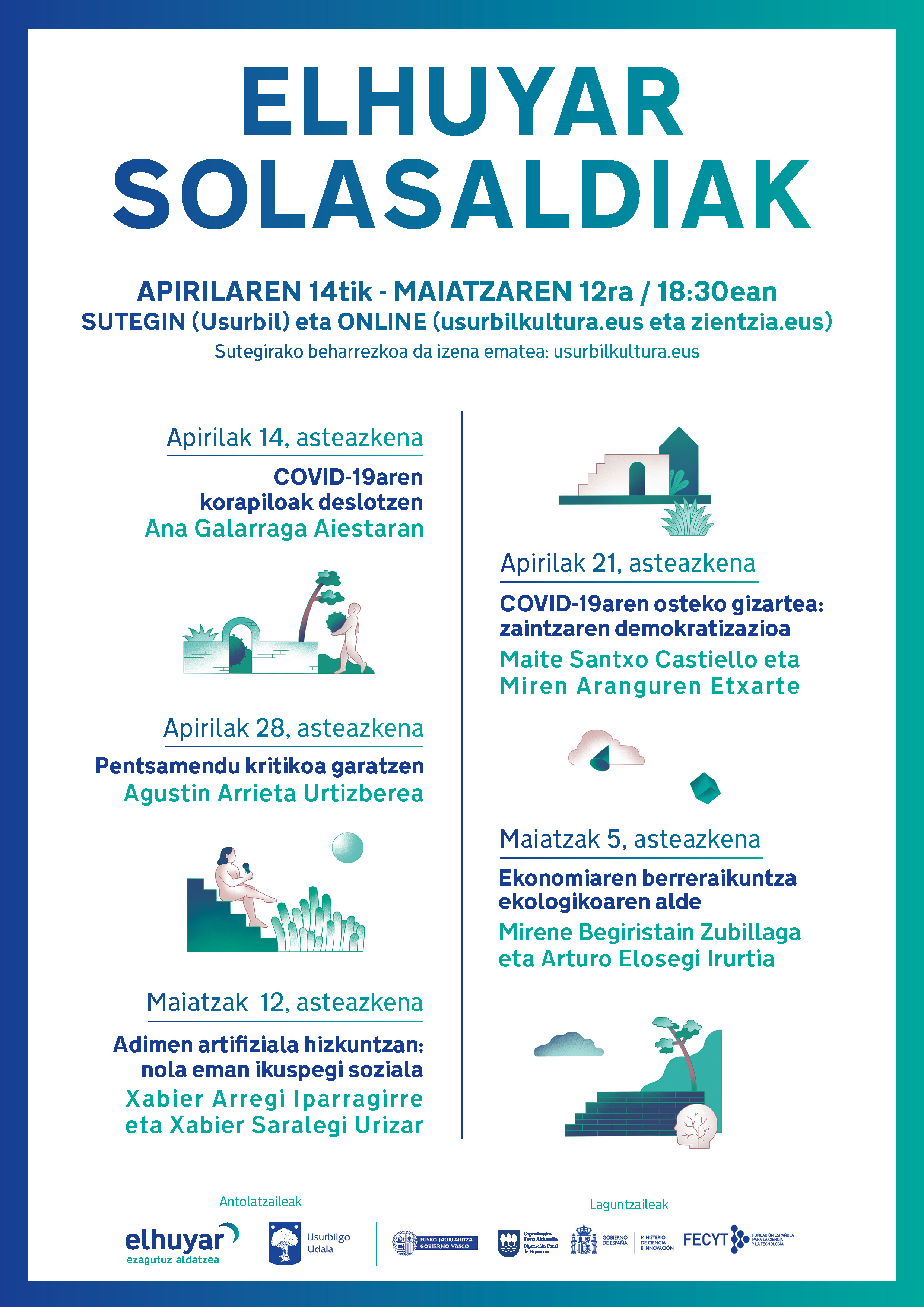 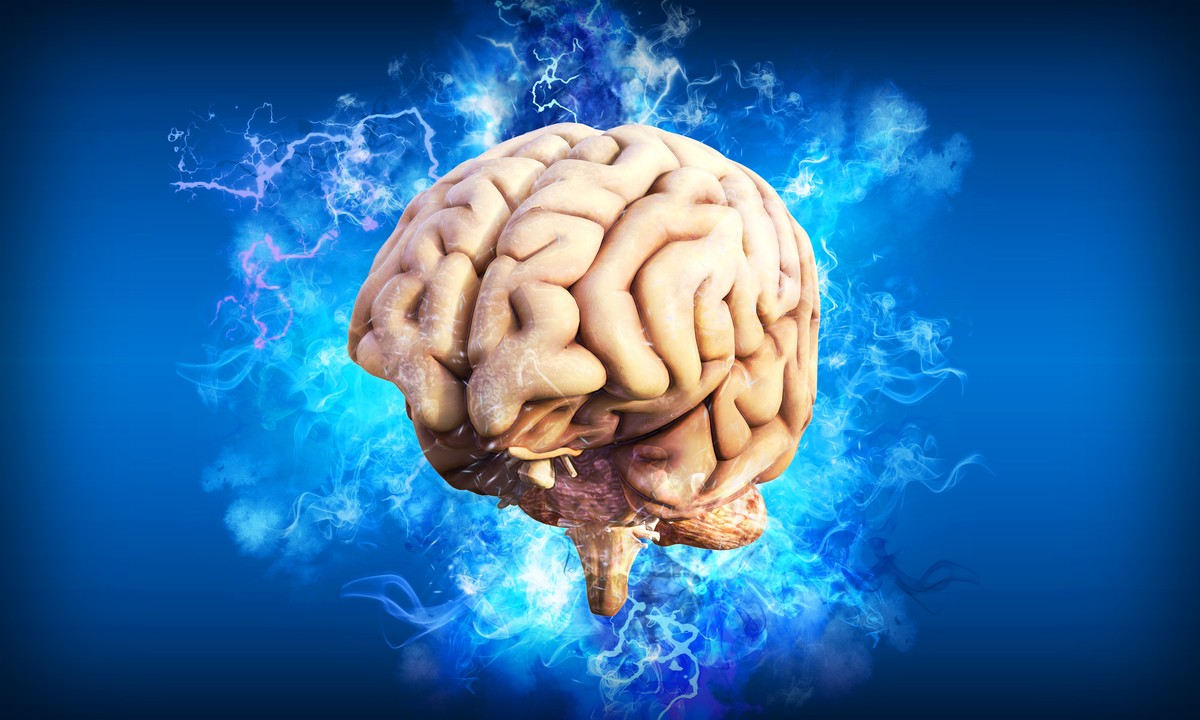