Down syndrome can be detected in maternal blood

Down syndrome and other diseases associated with chromosomal abnormalities can be detected by a blood study based on nucleic acid sequencing. In the research carried out by researchers from the Standford University of California, the new technique has been fully effective.

In recent years, techniques have been developed based on the detection of fetal DNA in the maternal blood, such as the sex of the fetus or the blood group. But in the case of Down syndrome it is necessary to detect an overcopy of chromosome 21, which was a major challenge. In fact, the amount of DNA of the fetus of the maternal blood is very small compared to that of the mother, and most of the laboratories are not able to detect the change produced by the presence of one more chromosome.

California researchers analyze the proportion of sequences of his father and mother in the RNA messenger of the fetus in his mother's blood. If in any of them the amount of RNA derived from chromosome 21 is double, it means that the fetus has an overcopy of this chromosome.

In the absence of a long way to become a routine examination at clinics, invasive tests that are currently being done to detect Down syndrome, such as amniocentesis, may be done. 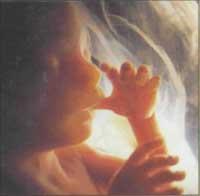