through PTICA the meaning of the stones found in the digestion apparatus of dinosaurs is being revealed.

Optics are revealing the meaning of the stones found in dinosaur digestion apparatus. It seems that with these stones called gastrolitos food was moved in the stomach of the animals.

Stone Meal: Dinosaurs used small stones for digestion. But the detection of these stones is very difficult.

Researchers at the Alamos National Laboratory in New Mexico, Roger Johnston, Kim Manley and Chiryl Lemanski, have developed an optical technique for identifying gastroliths. This technique will allow paleontologists to learn more about dinosaur behavior.

Studies so far on gastroliths have not clarified the problem too much. Geologists generally require testing before the previous theory is approved.

Gastroliths should have three characteristics for geologists. On the one hand, they must have different geological characteristics regarding the surrounding stones. On the other hand, circular stones without edges should be resistant to pain in the stomach and finally some rest should appear between the residues.

This last aspect is precisely the cause of the problem, since no gastroliths have been found between the residues.

The contribution of Johnston and his colleagues must be placed in this last field, that is, in the detection of gastroliths. The use of laser beams allows to know the characteristics of different stones, including gastroliths. This technique is expected to find unknown gastroliths. 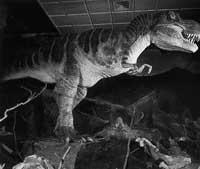