The elephant of Sabana (African Loxodonta) is not the only one living in Africa. In fact, the elephant of the jungle also lives on the same continent. The latter is smaller, thin and with a more rounded ear and hardly visible. Diet similar to gorillas (fruits, berries, etc.). come) and males usually live alone.

The elephant of savanna and jungle are the elephants who live in Africa. Yes, in that there is no doubt, they are elephants. But R. As Barnes says, they can be different species and, of course, not all coincide.

So far people have not been worried about it, but Richar Barnes, from the University of San Diego in California, has suggested that DNA analysis can make the two varieties of elephant completely different species. But Pierre Pfeffer, from the Natural History Museum of Paris, is quite the opposite. According to this scientist expert in mammals, elephants of the savannah and those of the jungle can be fertilized and have descending. Therefore, in no case can we speak of two species.

According to Pfeffer, the consideration of two species would open the ivory market. In fact, if the elephant of the forest is considered a different species, it can be captured, since the ban only protects the elephant from the savannah. 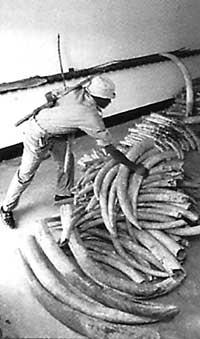