In the year 2020, so special and demanding for all, in which covid-19 has led almost all the news, has been out of the spotlight (in our view) an anniversary, the 100th anniversary of the birth of Henrietta Lacks. Although Henrietta's life was short and simple, his cells not only help him master covid-19, but help to understand and analyze the causes of other diseases. These cells have become a vital instrument. This is our little tribute. 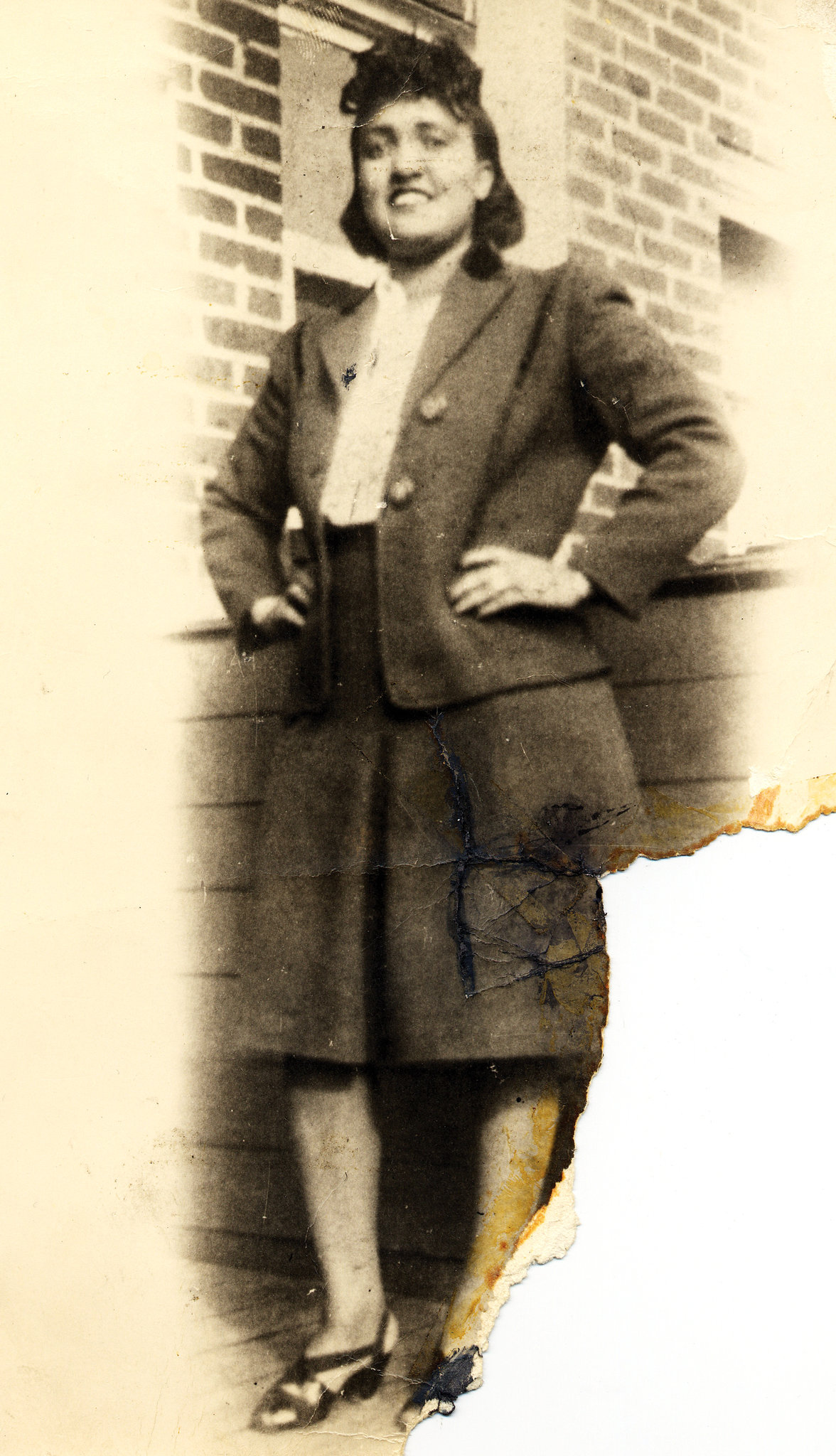 The year 2020 marks 100 years since the birth of bertsolari Xalbador, saxophonist Charlie Parker and filmmaker Ray Harryhaus, among others. Along with these famous characters, the centenary of the birth of Henrietta Lacks, less known, has also been fulfilled. Despite his minor fame, Henrietta has had great importance in numerous biomedical studies. Thanks to it, a polio vaccine was created and several discoveries have been made to combat AIDS, Parkinson's disease, human papilomabirus, cancer, etc. In fact, at least half a dozen Nobel laureates owe him some recognition.

But how has this tobacco dealer who died at age 31 become a fundamental pillar in high-level research?

Henrietta, in 1951, approached John Hopkins Hospital in Baltimore and at the entrance of the gynecological clinic said “I got a k> in my womb” (I have a knot in the uterus). After the initial examination, they found a dense mass in the cervix of Henrietta, from which, as usual at the time, they obtained a sample and took it to the hospital pathology laboratory for a deeper diagnosis. At that time, the laboratory was led by the marriage George-Otto Gey and Margaret Koudelka.

George, a cancer researcher, constantly needed new cells for his trials, since in vitro conditions most cells died relatively quickly (although Margaret was an expert in maintaining cells and maintaining laboratory aseptic conditions). But the cells obtained from Henrietta's tumor, however, were divided every 24 hours and continued to fragment. George was fascinated and, as usual, named these newly obtained cells by combining the patient's name and surname as HeLa cells. Meanwhile, Henrietta died 10 months after her first visit to the hospital, while her cancer cells continued to fragment in laboratories.

When he discovered that he had a tool with great potential in his hands, George began to distribute cells broadly and freely to laboratories in the United States. It is noteworthy that George also delivered samples of HeLa cells to various laboratories before conducting research with HeLa cells. George Gey was more a researcher or entrepreneur than a professor and treated Henrietta's cells as a scientific gift.

Although Henrietta's longest journey during his life was the middle between Clover (Virginia) and Baltimore (Maryland), about 400 kilometers, his cells have reached every corner of the world, have traveled thousands of kilometers by laboratory. They arrive in space! Both in MIR and the International Space Station.

Aside from the miles, money also has a lot to say in this story. On the ATCC (American Type Culture Collection) website, for example, when ordering cells such as “HeLa (ATCC® CCL-2TM)”, the cell tube costs 595€ + transport. Henrietta cells, since 1954, have generated millions and millions of euros for pharmaceutical companies, which has allowed spectacular medical advances. However, neither Henrietta nor her 5 children had health insurance. As mentioned above, Henrietta signed the conventional treatment form, but was not given written consent for biopsy samples and was never explained what was done to her cancer cells. The procedure of the year 1951 was followed and the fact of being a woman and black leather did not help him to guarantee his rights.

These cells, in addition to being dispersed by all laboratories in the world, are able to contaminate other cell cultures. In the years 1960-70, and assuming that several researchers were working with other types of cells, they realized that in their breeding containers they had HeLa cells! Henrietta cells had a large fragmentation capacity, allowing the replacement of the original cells of the container. This aroused the researchers' interest in HeLa cells, which began to wonder about their origin. Who was, therefore, the sick person behind the name “HeLa”? Initially, the Gey marriage laboratory, in order to hide its original name, gave other pseudonyms (Helen Lane or Helen Larsen) to researchers and journalists seeking their origin. However, the secret could not be kept. However, Henrietta's relatives had to wait even further to know him and more to understand the importance of discovery.

At present, when a patient's tissues are acquired for research, it is necessary for the patient to give written consent. Once the sample is obtained, it becomes anonymous and the donor, the patient, does not own the sample. That is, the sick person has no future rights over the income that can be derived from those tissues.

This situation, however, changed markedly in 2013. G3: In the journal Genes, Genomes, Genetics published the genomic characterization of a strain of HeLa cells (Landry et al., 2013) and the entire genome was made available online. This is very interesting for researchers, but it has many ethical issues. Although HeLa cells have mutated long after 62 years, genetic information from Henrietta and her family members became publicly available. After eliminating the genomic sequence from a well-known database, the European Molecular Biology Laboratory (EMBL), the National Health Institute of the United States (NIH) and the Lacks family agreed on the use of HeLa cells.

Unfortunately, the Lacks family is not the only case, currently there are thousands of cell lines and advances in sequencing and bioinformatics allow questioning the anonymity of donors. It is therefore increasingly necessary to foster relationships between donors, researchers and institutions.

Henrietta tumor cells originate from a human papilomavirus (HPV). The cell internalizes these viruses through cellular processes of endocytosis and subsequently the viral DNA is integrated into the host cell's DNA. In the case of henrietta, this viral DNA injection took place near the c-myc gene. Being C-myc one of the most important genes that drives cell division, allows to express HeLa constantly (continuously) in cells, so cell division is constantly promoted. On the other hand, HeLa is the high activity of telomerosis in cells. Telomeres are the ends of telomase-stabilized chromosomes. When cell divisions occur, telomeres shrink and, when critical size is reached, stop dividing cells or have more difficulty dividing them. Telomere stretching requires the activity of the enzyme telomerase, so in the case of HeLa cells, despite having performed numerous divisions, telomeres are long enough to continue producing cell division. 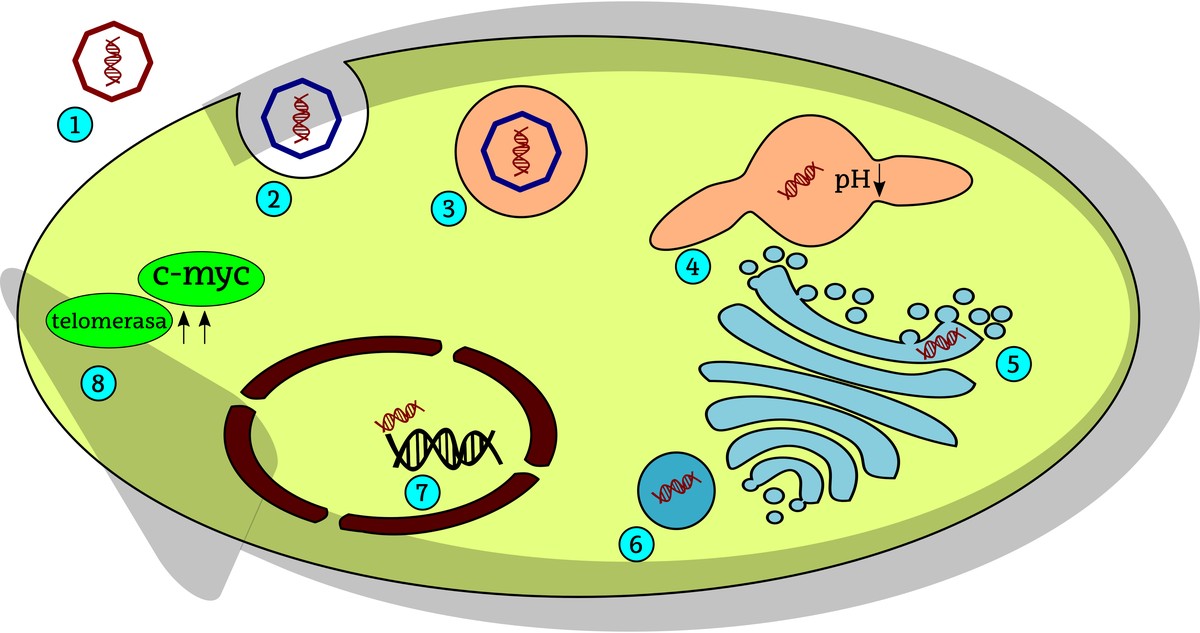 General scheme of human papillomavirus infection. The virus (1) is associated with cell membrane receptors and after a series of changes in the capsicum, it is introduced by endocytosis (2). The endocytic gallbladder (3) merges with lysosomes and forms a late endosoma with lower pH (4). This lower pH of the late endosome stabilizes the capsicum and reveals the DNA of the virus. The viral DNA is introduced into the vesicular transverse and through the cisterns of the Golgi apparatus (5) reaches the nucleus in the transport vesicles (6). It is introduced into the cell's DNA (7) and, in the case of HeLa cells, promotes the expression of several genes in the cell, such as c-myc and telomerase genes (8). Ed. Authors of the article

Henrietta was born 100 years ago and died 69 months ago, but her cells are still alive in laboratories around the world. HeLa's cells don't answer the personal questions Henrietta's daughter Deborah has about her mother (what was her mother's favorite color? Did you like to dance? ), but they will help solve other scientific questions. You know if your cells will keep celebrating forever.

Thank you for your contribution to science and congratulations to Henrietta!