I haven't, I haven't, but I'll never do it and I know what the result will be. If we introduce the data of the transparency index and scientific production in the states of the world in a coordinate system, we will immediately see that both characteristics or variables are closely related. In other words, in those countries where there is greater transparency (less corruption) there is more scientific activity and vice versa. With this I do not mean that one depends on one another; surely there is no direct dependence between both characteristics. However, the existence of such a link could indicate that both issues occur jointly, transparency and scientific activity.
Science and democracy
01/03/2011 | Pérez Iglesias, Juan Ignacio | Chair of Scientific Culture, UPV-DFB

That should not be surprising. There are two types of reasons, which refer to values and functional reasons, which also have a lot to do with each other. I will begin to work on values. Science, as we know it today, was born in the Age of Lights. At that time in the history of humanity, science and knowledge based on evidence in general became the main motor of intellectual progress. Even in the Age of Lights the foundations of today's democratic and open societies were laid. I do not think it is the result of the coincidence that both creations -- of democratic society and science -- coincide. These new ideas were born in the same intellectual environment: those that refer to the foundations of science and that are at the basis of the liberal ideology that would have been imposed in subsequent decades. In short, evidence-based knowledge bases are the same as the most open and democratic societies: they are doubt, freedom, tolerance and optimism. And both have the same rivals: prejudice, intolerance, dogmatism and pessimism.

I am going to refer below to functional reasons, but it must be made clear, as I said before, that these types of reasons have much to do with the values expressed in the previous lines. Evidence-based knowledge does not limit its influence to the scientific field, since, in addition to being the core of science, this type of knowledge plays an important role in democratic societies. The scientific hypotheses are initially similar to the experimental ones, some are discarded immediately, but the evidence is confirmed and considered consolidated. According to the scientific method, all new hypotheses must be analyzed and contrasted, some of which take their place over time. The functioning of democratic societies is similar. Freedom of criticism and tolerance for the opinions of others are fundamental in these societies, so the same system can become a consequence of criticism and evaluation.

According to Popper 1, the same mechanism allows for excellent levels of well-being in democratic societies. The critique allows to evaluate the proposals that are made and, as a result of this evaluation, to select the best options. Then, when these proposals are put into practice, their results can also be evaluated, and as a result of this evaluation these policies are maintained, modified or discarded. In short, all policies are based on forecasts about what will happen. And once established some forms of politics, they analyze, evaluate and criticize their results. This happens in open and democratic societies, while in dictatorships it cannot exist, because criticism itself is forbidden and without criticism a serious evaluation cannot be made. Therefore, it is important that the functioning of society is based on values similar to those of science.

In the past we have had indicators that show the incompatibility between science and dictatorial regimes. Lysen's case of the Soviet Union was paradigmatic. Trofim Lysenko was an agronomist without knowledge of genetics, but for 35 years (1929-1965) he radically conditioned the development of Soviet agriculture. Lysenko was a supporter of Lamarck's ideas. As is known, according to these ideas, the characteristics obtained in life are heritable. Lysenko liked these ideas because, in his opinion, they coincided with communist ideas. He gained great power during Stalin's dictatorship and had a great influence during Stalin's term and in the later years; few scientists faced each other and some of them lost their lives for it. But the agriculture of the Soviet Union had very negative results during all these years.

Today, there are fewer and fewer dictatorships in the world, because democracy is expanding in the peoples. There are significant exceptions, of course, but in this sense things are getting better. However, we live in an era of contradictions. Science and science and technology products have generated some distrust in Western countries. Of course, this will not have positive consequences for the development of our peoples. But more than development itself, I think the most dangerous thing is the damage these attitudes can do to democratic societies. Questioning the benefits of science can endanger the principles of science and, as we have seen before, the principles of science are the same as those of open and democratic societies.

Therefore, we must maintain the defense of science and its principles. Attitudes against science and evidence-based knowledge are increasingly widespread in our society and dogmatism and fundamentalism are becoming stronger and stronger. In short, questioning the foundations of science endangers the principles of our society. We should not be confused with this, because the welfare of the future is at stake, both material well-being and political and intellectual well-being. 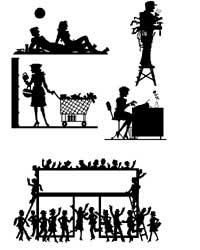