What is the future of the Panama Canal?

Panama has highlighted in recent days the unfortunate invasion of the US and the problem of General Noriega. Although these facts are important in the future of this country, the key to Panama may be at another point. And the situation of the Panama Canal is becoming worrying.

The Panama Canal is one of the most important navigation points in the world. Each year about 12 000 ships use this channel that connects the Pacific with the Atlantic Ocean. That's why the canal is Panama's most important industry: the canal toll brings $350 million/year to Panama, 8% of the gross national product. However, the future of the channel is in the air because the ghosts of drought and deforestation are seen on the horizon. Due to droughts, on some occasions (1981 and 1982 for example) it has had to close the channel for larger ships. Maintaining the canal in good condition for Panama has become a vital problem.

The Panama Canal has a great importance in world maritime transport. The passage through Cape Horn extends 8,000 nautical miles from the eastern ports of North America to the westernmost and 2,000 marine miles from Europe to the Far East or Oceania.

The history of the Panama Canal is quite ancient and is already XVI. In the eighteenth century, the Spaniards speculated on the possibility of creating a canal in the isthmus of Panama. But XIX. Until the twentieth century, a serious and profound idea began to be raised. In 1880 the French company Compagnie Universelle du Canal Interocéanique began its career. The project engineer was Ferdinand de Lesseps, a prestigious engineer who produced the Suez Canal. The serious technical problems and sudden tropical weather conditions left this first session. In fact, the company failed in 1889.

The second chapter begins with the incorporation of the United States. The Americans had special interest in the construction of the Panama Canal, as the maritime distance between its eastern and western coasts was reduced by 8,000 nautical miles. For this reason, in 1902 the US congress authorized the lehendakari to acquire the rights of the canal to the French through a special law, the Spooner Act. However, there was a very important clause in the act, which could reach a satisfactory agreement with the Columbians. Panama was part of Kolombia. The Americans failed to sign a favorable deal with the Columbians, so they provoked and encouraged the uprising in Panama and created a new state in Central America. As such, the new government did not hinder the demands of the gringos. 1.

The canal works began in the summer of 1904 and the builders were forced to respond to two points that the French had not decided. On the one hand, they had to decide to build the canal at sea level by cutting the land or overcoming the level differences through locks. On the other hand, they had to decide what to do to control the Txangres River. In 1879 the solution proposed by the French engineer Adolphe Godin de Lépinay and abandoned by Lesseps, under the direction of the American engineer John Stephens, was chosen to use locks and make a huge dam to control the Txangres River. Fruit of this dam was born the largest artificial lake in the world, Lake Gatun. 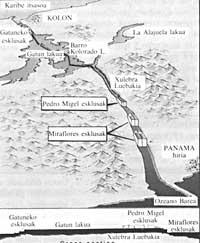 Outline of the Panama Canal.

The legal status of the canal was initially established by the Hay-Bunau-Varilla treaty signed in 1903. Under this Agreement, the United States obtained on both sides of the canal an area of 10 miles that divided Panama, where they enjoyed all sovereignty. The Canal Zone is a kind of colony located inside Panama. The Panamanians have always been very hurt by this problem.

Subsequently, other treaties were negotiated in 1936 and 1955, but until 1977 no treaty came that would please the Panamanians. This 1977 treaty was signed by the US President, Carter, and by the President of Panama, Omar Torrijos, who annulled all the previous ones. According to the treaty, Panama enjoys full sovereignty in the Canal Zone, but grants to the US. the rights of management, conservation and use of the channel. The head of the channel is Panama Canal Comission and the previous Panama Canal Company and Canal Zone Goverment disappeared. For monitoring the work of the Canal Commission, a group of 5 Americans and 4 Panameses were organized. But the most important part of the treatise for dolls is: That in the year 2000 the channel will pass to the hands of the Panameses, unless the Americans command something else.

In addition, the Annex to Neutrality was annexed to the Treaty in 1979. Under this, the US and Panama ensure that the passage through the canal will not be imposed on any type of vessel.

Design of the channel 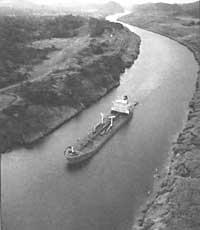 In the image the aspect of the channel is perfectly seen. The canal starts in the city of Colón in the Caribbean Sea and heads southeast to the town of Balboa del Pacífico, 82 km away. Of distance. When a boat passes from one end to the other of the channel, 200 million liters of water are poured into the ocean when the locks open. Therefore, the channel needs a huge supply of water to be able to function. Although the humid tropical climate of Panama helps a lot, there are two large reservoirs of water: Lake Gatun and Lake Alajuela were built in 1935. On the other hand, if the size of the boats allows, they pass two ships each time.

In the channel are distinguished nine zones or parts.

The canal locks work by gravity in Gatu taking advantage of the water that accumulates in the lakes of Alajuela and Miraflores. The locks are built two by two, so that the boats can pass in two senses. The locks are formed by two sheets related to the hinge, closed and opened by the motors located in the walls of the locks. The size of locks is: 300 meters long, 30 meters wide and 12 meters deep.

On the other hand, the mechanism of the locks is very delicate, so the ships do not pass by the force of their propellers (if not very small), but are towed by some locomotives.

Some current ships are too big to enter the locks of the Panama Canal. The first of them was the transatlantic Queen Mary, built in 1934. Now there are more than 1,000 boats. One of them is the Queen Elisabeth II of the figure, which has a length of 315 m. For this reason, the project of the new maritime channel parallel to the current one has been studied.

As deforestation is one of the most serious problems in the world today, especially in tropical regions, Panama is not out of this threat. The rain forest protects the pavement. Wooded soils behave like sponges, absorbing rain and pouring slowly. But if trees are poured, the water flows quickly into the changes to the reservoirs, which cannot withstand that large amount of water.

When the forest is standing, the earth slowly releases the water absorbed in the rain during the drought. On the contrary, when the forest has fallen, this does not happen and in the arid the land has not been able to release water. In addition, the soil is unprotected by the vegetation, so it suffers a great erosion by the rains. The water transports the soil to the reservoir and channel.

In Lake Alajuela, for example, sediments carried by water are rapidly accumulating. This lake has lost 5% of its capacity since 1935 and currently the sediment accumulation speed grows rapidly.

The canal is also filling with sediments, so the maintenance work, in this case the dredging, is becoming more and more expensive.

Deforestation around the canal is serious. Panama has lost 70% of its forests in the last 30 years. The shortage of free arable land is the basis of dumping. In the hands of a few large owners, the best agricultural lands of Panama's Beterri have remained. The poor peasants, the majority, have run out of land to plow. Some of these farmers have gone to the city, but others have dedicated themselves to agriculture to survive. When the forest is burned, the harvest or cattle grow for two or three years and the land has become impoverished, another grove is burned and left there.

On the other hand, in 1947 the government of Panama opened a parallel highway to the canal in the virgin forest until then, in the basin of the canal reservoirs. The opening of the road approached some industries and also put many plots at the disposal of farmers. In this region the population grew very fast, six times faster than in other regions of Panama.

However, the problem focuses on poverty. The normal panamares are thrown into the forest, without taking into account that in the short term this profession will be harmful, because they have no other means of life. On the other hand, with the excuse of the conflict between Panama and the United States, the Americans have eliminated subsidies putting the Panamanian economy in serious danger.

On the other hand, Panama has for two years the strictest policy and legislation on forestry in South America. But economic problems have made the application of this legislation very difficult. In addition, the simple prohibition of cutting the forest carries non-positive or negative consequences, since farmers consider conservation campaigns as enemies that endanger their lives.

If you want the forest to last and expand its surface, it is clear that a new way of life must be offered to peasant subsistences. On the other hand, it is necessary to teach farmers that their future can only be assured by the ingestion of forests. Therefore, the future of the Panama Canal should be linked to these two axes: alternative livelihoods for farmers and deep educational work.

These two axes have been joined in recent years by the effort made by the Government of Panama with the support of several foreign aid agencies, despite the fact that the North American economic boycott has not been supported. The experiences carried out elsewhere in the world have shown that it is still early to see the consequences and results of this policy, since it is a long-term task, but it is the best way to take.

In any case, what consequences will the change of political situation have?

The fact that the U.S. directly introduces the hand into Panama’s internal problems is not this morning. 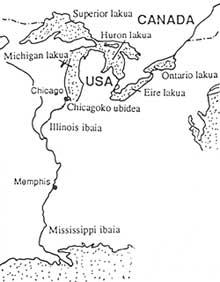