Pluto is the planet furthest from our system and is smaller and heavier than previously thought. This means that, as astronomers have thought so far, it is not a "dirty ice ball" composed of solid methane. It should also contain stones and icy water. To reach this conclusion, astronomers have used the study of the shadow created by passing the satellites of Pluto (Txaron) ahead of the planet.

When Txaron passes in front of Pluto, it hides part of its surface and decreases its total brightness. In addition, astronomers know Txaron's orbit and know where it is at all times. Therefore, when the light of Pluto begins to subside, they know where the edge of the planet is. The sizes of Pluto and Txaron can be known carefully analysing the brightness damping.

Observations indicate that the diameter of Pluto is 2,200 km, that is, two thirds of the Moon from top to bottom. It was previously thought to be the size of the Moon.

The orbit of Txaron around Pluto gives us the measure of the gravity of the planet and, therefore, the mass of the planet; that of the Earth, four hundred and forty. Knowing the mass and size you can obtain density and density composition. If Pluto were outside the size of the Moon, it would be somewhat lighter than water. This would mean a low-density substance like methane. New size measurements indicate that water is twice heavier and that the planet will have stones and solid water.

Pluto is less than seven moons of the Solar System. On the contrary, its Moon is quite large, with 1160 km in diameter. That is, it is about half the size of Pluto (the largest size ratio between planet and satellite). Pluto and Txarón can say that more than one lunar planet/system forms a system like the “double planets”. 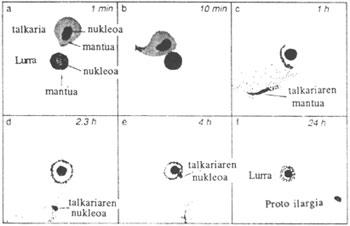