The sound of the ocean changes 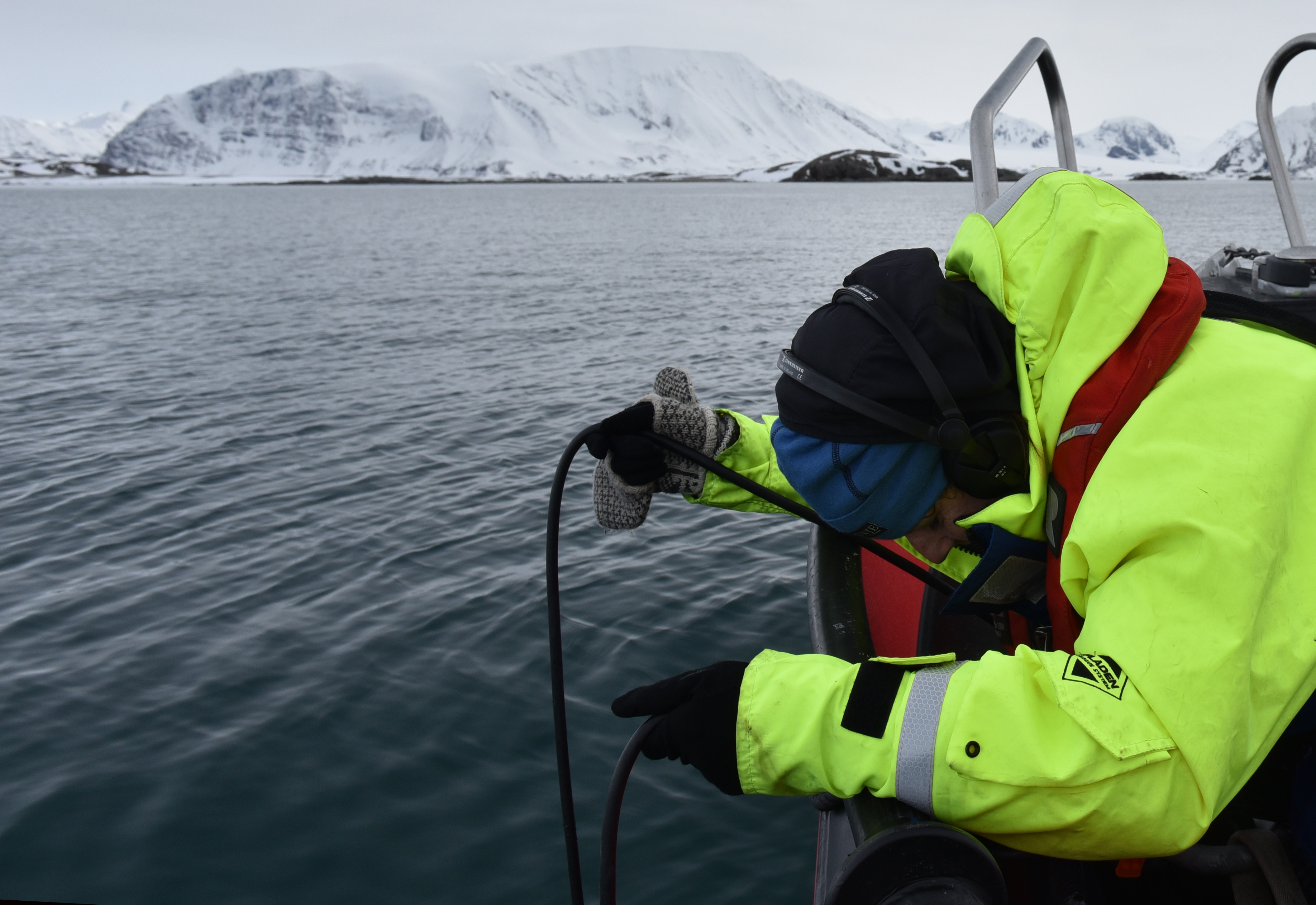 The researchers affirm that in the Anthropocene there has been a propagation of the sound of human activities in the ocean. Ed. Food in the Winde
Scientists claim that the sound of the ocean is changing due to human activities at sea. Sound is fundamental in the marine sensory environment, since it is the signal that travels farther in the oceanic waters. As a fundamental sense in many marine animals, researchers affirm that the noise of human activities causes a great confusion. They have considered negligence that there is still no solid legislation that encourages the transition of anthropogenic maritime noise and have called for limiting noise pollution in binding international agreements.
Through sound, animals interpret the marine environment. The sound reaches farther and deeper than light or any chemical compound. They serve to explore the environment, navigate, hunt, create group cohesion, protect the territory, spread the cries of death and communicate with close and distant members, both of their species and of other species.
Bacalaos and Atlantic groupers use the sounds to gather the group and coordinate the egg laying tasks. The kiosks produce the sound of "snap" to dazzle the dams, until they sound strong "craskadas" in coastal habitats with strong colonies of shrimps. Dolphins, sperm whales and mazopas have sophisticated sonar systems to fit and chase prey under water. The larvae of the reefs invertebrates hear the sounds of these landscapes to choose where they will settle. And humpback whales sing complex songs in the dialect of the region as a demonstration of their reproductive capacity. Each marine ecosystem has its own song.
Noisy human oceans
However, with the beginning of the anthropocene, the incursive sound of human activities has spread in the ocean: seismic studies for the detection of oil and gas deposits produce continuous sounds of high energy, low frequency and short duration; the scanning probes of the seabed, the sounds of high frequency; the military use sonars of varied frequency to detect the submarine ships; the tasks of perforation of the marine wind parks and the noise of longer navigation years
Anthropogenic noise has modified the ocean's own sounds, such as biofonies and geophonics, creating new noises in many places and making the natural singing of the sea disappear, disorienting and displacing animals, emptying the ecosystems of the coral reefs.
A review published by the journal Science reveals the existence of consistent evidence that anthropogenic noise affects marine mammals, fish, invertebrates and birds. Some animals are able to alter the frequency of the sounds they produce, so that they are heard by their companions, but in others they totally condition the hearing, provoking physiological changes and significant behavior; for example, the larvae of the invertebrates are fixed in an inadequate area due to the anthropophonics, putting in danger the viability of the adult animals.
Here you can hear the sounds recorded by researchers in the ocean: fish, mammals, crustaceans, inhedges, ice, water and even humans.
It is time to take measures
The authors of the paper have come to the conclusion that a systematic evaluation of anthropogenic maritime noise is urgent, as is done with the emission of CO2 and the emitted organic pollutants; in another case, if there is no systematic data the problem is ignored. In addition, it is recalled that, unlike other sources of pollution, once the sound source has been eliminated, anthropogenic noise does not persist in the environment, so the measures taken can have almost immediate positive effects.
Thus they have represented the future according to the measures adopted: 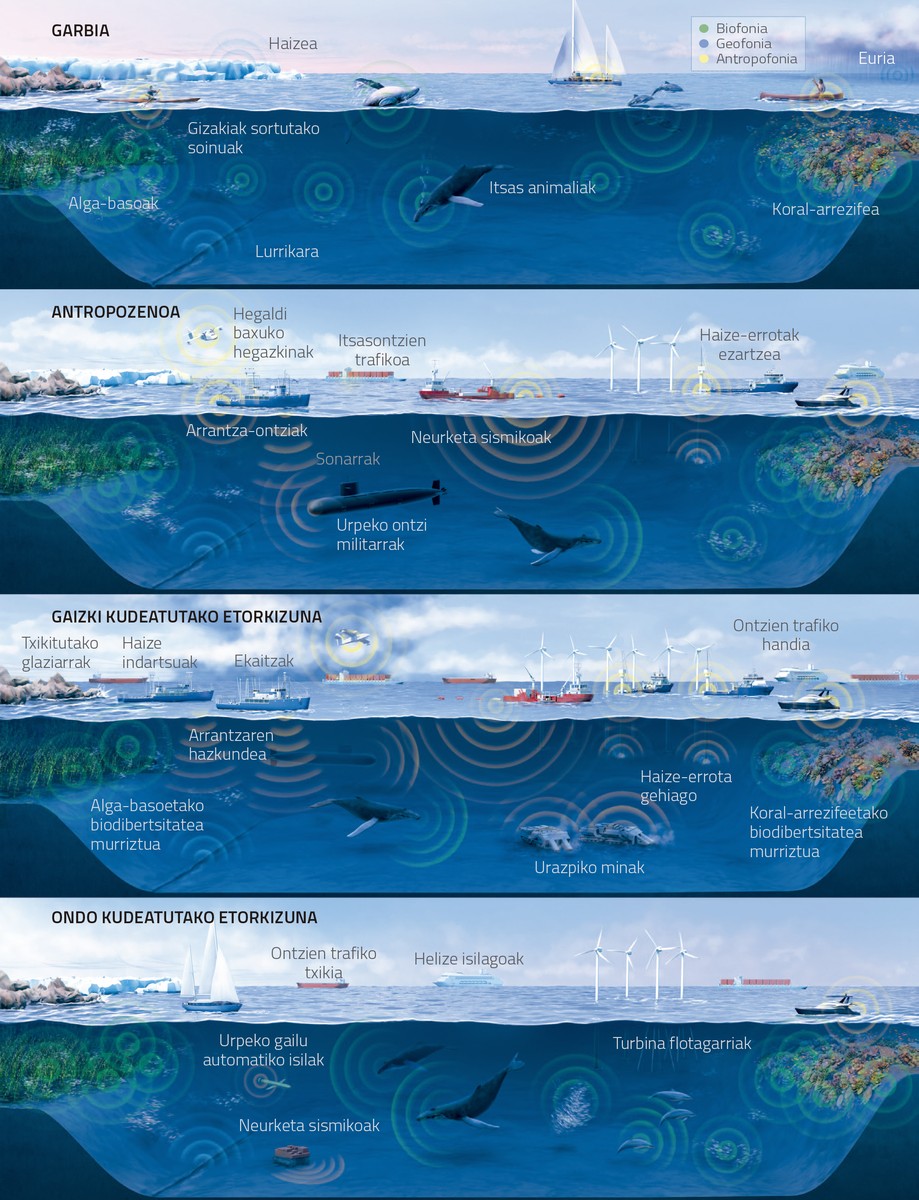 Ed. Kaust, Xavier Pita, adapted from the journal Science
There are technological solutions that the marine industry can adopt to attenuate noise, but they are not enough, according to researchers. The ocean-based economy is on the rise and its contribution to global gross domestic product is expected to double by 2030. Therefore, in the International Year of Sound, the legal limitation of anthropogenic noise has been requested. Not only in national legislation, but also in binding international agreements that consider it necessary to limit noise pollution.