“Curiosity and the ability to surprise are characteristic of scientists”

Researcher Miren Cajaraville Bereziartua (Donostia, 1964) will receive the Advanced recognition that the Department of Education of the Basque Government makes to women scientists. This mention, which covers the entire scientific trajectory, highlights in the case of Cajaraville its fruitful trajectory, especially that devoted to the investigation of markers and effects of pollution on cells of marine organisms. He has been director of the consolidated research group on cellular biology in environmental toxicology since 2001 and researcher at the PiE Plentzia Marine Station since 2012. From this watchtower he has answered the questions with rigor, depth and hope. 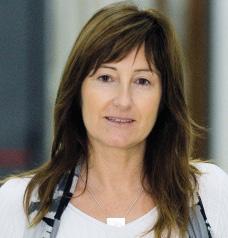 400
What has surprised you most, altered or fascinated you since you started working?

The truth is that I find this a very difficult question to answer. I find it very difficult to choose one thing, and I also think it is normal that I have been surprised by many things. I think one characteristic of scientists is the ability to surprise. And over all these years, I've started a lot of projects and research lines, and almost every single one of them has felt that amazement. And I think for those of us who do science, it's very important, also for science, because it's motor. And before, of course, curiosity, that desire to know. Hence, new ideas emerge, new hypotheses…

But in my field of choice, in environmental toxicology, I was struck by how quickly living things adapted to the situation when the Prestige disaster happened. At the time of the disaster, we gathered researchers from different fields in a research project (toxicologists, environmentalists, economists…) and analyzed in my field how the dumping affected bivalves and fish. It was a work of years, in fact we're still tracking, but the first year we started to see that bivalves were able to adapt. I found that surprising.

We hoped that living beings would not recover for decades. So I took those first signs of recovery with hope. Later, year after year, we corroborated this evolution and found that, after 3-4 years, the ecosystems returned to the situation before the landfill.

In relation to this, I would like to maintain hope. Looking to the future, we have challenges such as climate change or pollution itself, which shows us that we must continue our efforts. It is important to have hope, not to think that we can do nothing and that everything is lost. It is not time to despair and, in this sense, it is important to emphasize that living beings have the capacity to adapt and modify within certain limits.

Beyond my scope, I would love to make progress in achieving the United Nations Sustainable Development Goals in the coming years. It's 17 goals in which everything is: eradication of poverty, peace, education... and in my field, specifically, clean water, for climate, ocean health or underwater life. Of course, these are very ambitious goals and asking for a revolution can be excessive, but in the coming years I would like to meet them or at least bring them closer.

I am optimistic and, in addition to the United Nations, the European Union, there is a zero pollution target by 2050. As early as 2000, the Water Framework Directive was established, the aim of which was to achieve good seas by 2020. Those 20 years have passed and we have seen that we have not been able to achieve the objective, but great progress has been made. It must be acknowledged that we have not arrived, there is still pollution in 75-96% of the seas. But progress is undeniable. So I'm a hope, but yes, it's very important that we all make an effort to achieve those goals.