The usefulness of microwaves in the chemical field

Microwaves are harmful. This proverb is well known, as on several occasions we have heard of the harmful effects of microwaves. Although this way of thinking is widespread, it is not correct, or at least is yet to be demonstrated; it is often said to cause genetic damage to DNA, cause blindness, etc. To analyze the possible effects on DNA, two groups of researchers were formed, one at the University of Uppsala in Sweden and one at King’s College in London. Both investigated the microwave absorption of DNA in a frequency range of 1000 to 10000 megahertz and found no signs of absorption. The result of these research is that microwaves do not cause genetic damage. It has been shown that some diseases that were created (or at least created) by microwaves are not really caused by them.

However, microwaves are very unknown, so it cannot be said that they are absolutely beneficial or harmful. That is why we need to investigate more thoroughly.

In laboratories like this, microwaves could become common. But not to heat lunch.

We have all seen that in the cafeterias the waiter introduces the “croissant” in a small oven and after a minute extracts heat. This small oven is normally a microwave, the most comfortable for them because of its speed and cleanliness.

We know that if food enters it, the microwaves heat up, but we don't know what that effect is.

So far scientists have believed that microwaves only heated water and that food warming was due to water heating; the main component of food is water. The basis of this belief is that microwaves accelerate the movement of water rotation. The acceleration of movement increases the energy of rotation and when molecules with a very high kinetic energy collide with the others, they discharge this excess energy increasing the thermal energy of the environment. This reasoning explains the increase in ambient temperature.

Some chemical reactions of great chemical interest do not contain water molecules in their components. This explains why chemicals have been so slow to start using microwaves.

The first use of microwaves in chemical laboratories consisted of drying certain compounds, which caused evaporation of water and obtaining a purified compound.

Richard Gedye, professor at Laurentian University of Ontario, began in 1988 to investigate the usefulness of microwaves to accelerate chemical reactions.

Gedy and his team of researchers used airtight teflon containers for organic reactions.

The results obtained after entering and lighting in the oven were very positive, since the performance was very high although inside the oven there was only one minute.

In some reactions, this method of heating allowed to reach reaction speeds much higher than those of conventional heating.

The most rapid reaction was the reaction of cyanophenyl benzo ether. It usually takes 12 hours to reach 65% of the maximum possible performance, and this team of researchers, using microwave to heat, achieved the same result in 35 seconds.

R.Gey of his companions accelerate 1,200 times some chemical reactions.

Why do reactions accelerate? Other experiments were conducted to answer this question. They took some solvents and measured the change in the microwave after a minute. They observed that the temperature of water, alcohols and similar solvents increased dramatically, but that in other solvents such as paraffin the temperature did not rise much.

This group of researchers concluded that the heating power of microwaves was in the polarity of the liquid. But before we explain this effect we have to explain what polarity is.

Suppose we have two atoms of chlorine, for example. If these two atoms form a bond, it will be totally covalent (they are the same atoms). Think we have a sodium atom and a chlorine atom. The relationship between both atoms is purely ionic, as they present very different electronegativity. Intermediate cases are not perfect covalent, or perfect ionic, but polar covalent. In these links the distribution of the electric charge is not homogeneous, since around the most electronegative atom the density of the electric charge is greater than in the other. This constitutes an electric dipole.

To form the polar compound it is not enough to have covalent polar links. It is necessary not to eliminate the effects of all electric dipoles. For example, carbon chloride (IV) has a Cl4C chemical formula. All links are polar covalent, but the spatial structure of this compound is tetrahedron, and the effects of all dipoles are destroyed. The same is true of CO2, which is four and the dipoles directed at oxygen atoms destroy each other.

If in a medium we have a polar compound, we have a dipole that can be oriented by an electric field. Gedy and his team explain in their work that the heating power of microwaves is the same effect. Gedy states that the dipoles of the polar liquid molecules are oriented by the action of the electric field that involves the electromagnetic radiations (microwaves), and that when the molecules relax to return to their initial state, their movements are extracted from their stable state producing heat.

Since Gedy's works were published, numerous investigations have been conducted using microwaves. At St. Louis University a group of researchers used a microwave to synthesize short-lived medicines. These drugs are radiomedicines and have great importance in current healing, as they are used to study the evolution of certain diseases or to detect the incidence of certain drugs. A component of the radiomedication is a radioactive substance, so its life is very short. That is why it is so important to synthesize this substance at the time it is needed. The aforementioned group obtained a higher microwave performance and a shorter time.

Acceleration of reaction speeds is based on two effects. Use of polar solvents, with the consequent increase in temperature. On the other hand, airtight containers are used. Therefore, when the solvent reaches its boiling temperature it does not evaporate as when other heating methods are used. Consequently, the reaction medium will remain at higher temperature, with higher reaction speed. 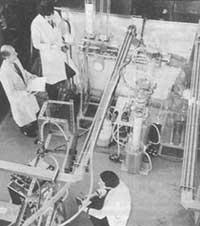 Microwaves should not be limited only to heating organic substances. They can be used for other things with good consequences. At Oxford University, Mike Mingo used microwaves to dry organic oxides. It is surprising because metallic oxides without water do not contain polar molecules. These oxides form a crystalline network formed by metallic cations and anionic oxides arranged symmetrically. Therefore, there should be no dipole.

There are metal oxides that absorb microwaves and do not absorb them. The explanation of this contradiction is very simple and consists in the absence of stoichiometry. Some crystalline networks are not perfect and then the number of anions or cations is higher, which causes distortions in the network; the distribution of the electric charge is not homogeneous, which causes polarity. Microwaves can tune into this polarity and the material is heated. Increased temperature increases polarity and facilitates absorption of microwaves.

This melting of metal oxides can be very important in superconductivity, as it can be done in very short times using microwave.

Studies are also being carried out to know the potential of microwaves and use their advantages. The Harwell laboratory is investigating a new method that uses microwaves to remove radioactive waste since 1970. This procedure, microbitrification, definitively releases radioactive waste. It is a two-stage procedure. The first removes water and nitrates from all products generated in nuclear fissions become oxides. In the second, the microwaves melt the oxides and hersten them in an inert borosilicate glass. 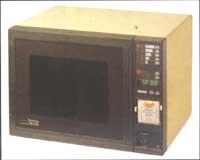