Lines of Garza: Unknown Basque Art in the United States

What is the heron line? Here in the Western United States they are called aspen carvings, that is, aspen (in Latin it is called Populus Tremula, but the shepherds call “txopua”) or false stripes on the surface of the herons; images and letters. That is the art created by the Basque shepherds in the famous West. 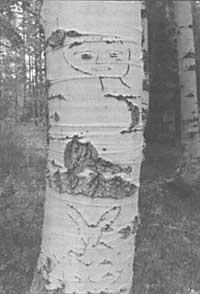 Northern California: (Images of the girl and hare by Irazabal or Urionagua) "Viva Vizcaya" (photo by M.Mitchell).

It was time to make known in Euskal Herria the special art of the shepherds, because as I know, this topic has hardly been mentioned among us. Here in North America, yes, they have been the writers who have begun to study this subject and have individually published brief works, but their research was very limited and not generalized. Moreover, since they did not know Basque, they had not read words drawn in Basque, not even in Spanish. Therefore, I think I am the only and the first Basque who has seriously joined this research.

In addition to this very nice work of art, you have a work that is not taught or learned in any school. Nobody knows why our baserritarras, most of them of little school, began to paint the herons when they came grazing to the American zones. From whom did they learn that art? Of prehistoric harpetarras? It is clear why they draw the heron, that is, because it has a thin, whitish skin (softer than the beech). Therefore, it is optional to write on it.

The Basques were and are still travelers, but we arrived in North America from the Yankees at the latest. The first came from South America on the occasion of the 1849 “golden competition” in California. In California, some started growing and earning. They soon repeated themselves and the proliferation of shepherds, in search of pastures with sheep spread to the high mountains of Sierra from the years 1860. More and more extended, farther, higher, east of the mountains, at the height of Nevada, closed in another 25 years. You know the later story: In the deserts of Idaho, Oregon, Wyoming, Utah, Colorado, and Arizona there were eleven Basque shepherds suffering the loneliness of Christ and cultural alienation.

Until 1940 the high mountains belonged to shepherds, but then the owners of the ski resorts and the pear builders began to push to chase away the sheep, and then the grazing has gone down in these areas. Due to the abundance of pastures and waters in the high mountains, the pastor had time to sleep or to draw herons. And many did. There are a number of “rock lines” in each of the places, that is, pictures of stones, but few.

Heron by the Reindeer: "The good Arno has nothing, better than a basonbat, soft. Is it not? Banaski hobe" (drawn in 1959 by Pastor Jean Biscay de Heleta). (Photo of the malle).

We don't know who started painting the herons, but the oldest line known is that of 1887, in the Californian forests of Pluma National Forest. They say there's another one from 1870, but I haven't seen it. Most herons are between 60 and 80 years old. If you look at the herons that exist today in the mountains of Sierra and in many other western streams, in them you will find thousands of names, thousands of years and words, almost all of them made by Basque shepherds. Many lines have unfortunately been lost forever and many herons rot every sunken year. Those who remain are there in incredible places, with knowledge, but in silence, until someone finds and catalogues them. In addition, since there is currently no heron manufacturer, it will end the art and culture of a life, that is, a curious part of the history of the Basques.

Therefore, because this research is limited in time and cannot be extended, I have started working, taking photons and collecting data. Who knows the story in those trees!

Today I start with this little work and as an introduction we will classify the information that contains the herons.

1. Normally, the pastor drew his name, surname and year. Sometimes also the name of the country of origin or territory. Occasionally, day of year or age.

This information, even if it is nothing, is basic in history: names, place and time... are the three elements that make up literature. Several conclusions can be drawn from this pile. 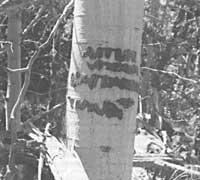 2. I do not know where these baserritarras learned to draw the human body, the head, the hair, the chest, the English, the costume, the beret, etc., but there are some specimens that Picasso himself could sign with satisfaction. We can say, without fear, that there is a “pastor style” in the artistic field. The shepherds were young men and in that desert solitude it is not surprising the desire of the woman. This desire makes thousands of female figures appear on the trees, almost always naked and with galloping antechamber. Male figures appear almost always dressed, with the hat on the head and the pipe in the mouth.

If there were missing the sexual images Ar-eme, it would be worrying, but be calm, of which there is a lot and not a few pornographic.

3. Ten thousand years ago the ancestors of the Basques painted in their harpies horses, bison and other animals. In this century various donkeys, horses, bears, lions, birds, fish, etc. have been drawn. And the sheep? It is not easy to believe, but there is hardly a line of sheep and dogs.

4th Nostalgia. That was the daily enemy of the pastor, and to try to relieve sadness, the distant homeland. This feeling is common in trees. Before they remembered the land, but in the American forests who knows where is or what is Makea or Natxitxu? That is why they wrote Bizkaia, Navarra, Spain and France.

The branch of being Basque also appears: Basqo, Bask, Basque and even Spanish. And of course, political issues, how not? Gora Euskadi, Gora Navarra, Spanish Bibas, etc. 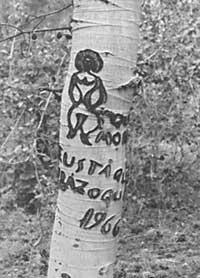 5. There are religious phrases and bloodlines, more than mere religions, often for tremendous loneliness.

6th Other comments, opinions and topics of great variety are: about pastoral life, grazing, patron, friends of the shepherd, America and Americans, etc.

7. Also very interesting (and sometimes ridiculous) are the words written in English by pastors. It was not books, but mountain books, and they wrote as they were heard. For example, with the need for siper “sheepherder”; casepik instead of “Castle Peak”, “Saniskibi” instead of “Thanksgiving”, etc. Linguists who are translating the English words might learn something from these ethsenplos.

Great influence of foreign territory, Frederick J. The historian Turner discovered it. Many of our pastors wrote here their first words in Basque in America. Those of Iparralde wrote more in Basque than the others. Vizcaínos frequently used the old language for politics, while the Navarros usually used Spanish.

Pastors have also left another kind of “art” in the American desert. In stony areas without trees were built several piles of stones on a rectangular base of meter and a half height, called “mozo stones”. Nobody knows what this work is due to; apika, by the customs of the harrijasotzailes, or in memory of the dolmens.

There are books in America about Basque shepherds and some good ones, but none of them use the data of the heron lines, although these are the first. Heron lines are the autobiography of shepherds. And now I ask you: how many pastors in the world have written about their life?